The title of this online publication, Mujeres Talk, spurred me to think about how I, as a scholar, an artist, and a scholar-artist-activist, “talk” in order to communicate with my students, my colleagues and with anyone willing to engage with me or my work. Much of the “talking” I do in an academic setting or related to academic production conforms in large measure to the usual genres: the journal article, scholarly monograph, book chapter, book review, classroom lecture and seminar-style Socratic dialogue of posing thought-inducing questions to provoke discussion that leads to a more profound comprehension of and interaction with a given text, film, photograph or other cultural artifact. Much of this communication has been concerned with issues and questions raised by the ever-expanding field of Latina/o Studies and also by the study of U.S. literature, history and culture more generally. Much of this communication has been based in words—the analysis of clusters of words on a page (a block of text or a single phrase in context) or of a segment of dialogue in a film. It has involved the translation of an aesthetic and political (“aesthetico-political,” to borrow Algerian-born French philosopher Jacques Rancière’s phrase) response to a visual and/or auditory stimulus into words—words spoken and words written in the classroom and beyond, words vibrating in the air or fixed on the printed page or embedded in an electronic document. So much of my life as a scholar and communicator has involved the encoding of synchronic thoughts into diachronic words and the decoding of those words into more words that conform to a linear, rationalist discourse. Having published two books and more than twenty-five articles, I now have the chance to review, with considerable breadth, the patterns of my own words.

One particular pattern stands out for me. That is my use of the term “figure” as in “Figures of Spain in Anglo-American Culture,” “Trafficking in the Figure of the Latino,” and “Algebra of Twisted Figures.” My own interest in this word—“figure”—catches my attention. The term “figure” and related ones such as “figurative” are complex, with a very long history in the study of language and rhetoric dating back to Aristotle and Quintilian. A “figure” designates both a model or type (something that recurs or shows up again and again and thus itself belongs to a familiar pattern) but also the site where and the operation through which the literal or the expected is exaggerated, altered or pulled away—bent, if you will—from its normal or familiar course as indicated by the phrase “figurative language.” “Literal language” designates words that do not deviate from their defined meaning. In contrast, “figurative language” understood as “non-literal language” refers to words or word clusters that do deviate from the obvious and most ostensible—that which implies a non-literal meaning, a turn or many turns away from or beyond their denotation. With regard to language as spoken and written words, figurative language can be understood as the place where words make a break away from themselves, cease to mean what they spell and mean more than what they say. This excess of meaning is indicated by the confounding of meaning and a certain silencing, hushing or muting of expected meanings at the same time that something even familiar and déjà vu (seen again or before) is expressed as with those “figures”: “Figures of Spain,” “Figure of the Latino,” and so forth. So, given my interest in “figures” and the “figurative language” that revolves around and also composes these figures—as all figures seem to be part of an extended metaphor or conceit and are highly charged with “allusions” (references beyond themselves)—I must conclude that I am fascinated by the scenarios in which words exceed themselves in ways that do not speak but carry a loaded silence, an inaudible or illegible register that nevertheless must be heard or read. 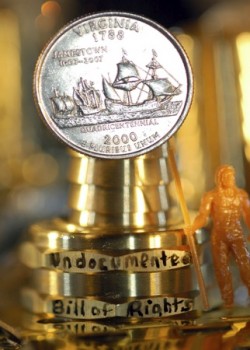 From the vantage point of this consideration of “figure” and “figurative language” I frame my interest in photography that has taken many forms—a second career as a conceptual photographer, a scholar studying narratives predicated on photographic situations or that textually invoke photographs, a creative writer who produces photo-text stories (stories accompanied by photographs), and a photographer who has been especially invested for the last decade in photographing literal (but also not so literal) human-model figures both as window display store mannequins and also as toy store minikins or little figurines less than an inch tall usually sold to children for the purposes of creating fantasy plays in the process of playing with them.

A photograph is said to be “mute” except for its caption or title, assuming it has one. Even though the caption or title may speak for it or anchor the silent enigma of the photograph in words that frame its mysterious content in a certain way, there is always a great deal in any photograph or series of photographs that eludes the written (or, sometimes, spoken) words. This is not to say that the photograph isn’t, in fact, some kind of text. It is, as Roland Barthes’s essay “Rhetoric of the Image” would suggest. Photographs exist within the context of their culture and participate in its image-repertoire, visual regimes and semiotic codes both in their making/taking and in their reception. But, nevertheless, there remains the mysterious silence of the visual photographic image—its ambiguity, its Sphinx-like riddle quality that implicitly poses the questions: “What do you see there? How and why? What lies within its borders? What lies beyond it?” 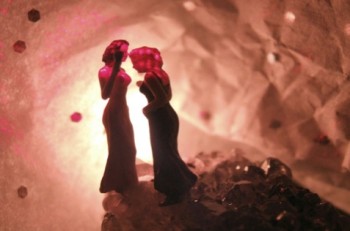 Add to this quality about photography the photography of human-model non-human and inanimate mannequins and minikins and a double dose of mutism has been introduced at the same time that viewers confront the extreme literalization of the concepts of “figure” and “figuration” via these figurines! These little figurines “speak” only a language of gesture. The photographs of them “speak” even more mutely through planes of color; reflection, refraction and diffraction of light achieved through the use of reflective surfaces, prisms, mirrors and/or split field filters; and the particular angles of perception afforded by any given image. 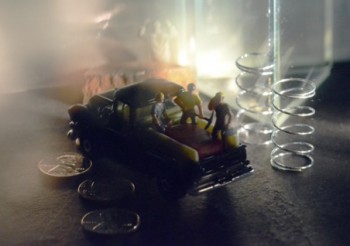 Workers Heading to the Island of the Dead © 2012

The photographs of these miniature figurines in their perverse figuration—so figure-like (hardly abstract, almost allegorical, in fact) and yet so elusive in their muteness—lead away from words as much as they lead toward them in that to “understand” the image that very image invites us to tell a story about what these figurines might be doing. When children play with these figurines they tell themselves stories about them, but the children may also just as easily hum to themselves, audibly or under their breath, making rhythmic sounds and/or music rather than forming intelligible words.

I do not allow my minikin photographs to be entirely mute. I give them titles, after all. Often these titles are designed to be provocative and obviously politically arresting, especially around issues that pertain to significant segments of the Latina/o population—farm workers, migrants, working-class Latina/os, Latina/os in socio-political or socio-economic circumstances of vulnerability. “He Saw Himself in the Gaze of the Dominant Culture,” “Woman Caught in a Corporate Water Tower,” and “Sixties Dream Followed by a Hazmat Suit” are examples of provocative, politically-pointed titles in addition to the title of the image below. 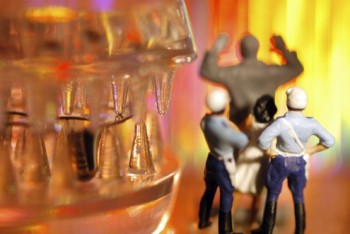 The captions or titles anchor the images in certain kinds of significations and potentially pre-dispose viewers to see these images in particular kinds of ways. But, despite this anchor, the minikin photographs—the photographs of these tiny figurines—continue to drift into the zone of the unnameable or the not easily named or the too multiply-signifying to name. And this quality constitutes the bent nature of these images. They are perverse, queer, puzzling and I would not want them to be any other way. That to me is their allure and the reason to keep making them and to keep looking at them. I say “making” and “looking” because though I have set the scene— have placed the figures in distinct relations to one another, the possibilities of these mute scenarios are not exhausted by my choreography. The possibilities exceed whatever planned scene I plotted at the time. The possibilities are produced in the incalculable interactions of viewing the scenes over time (each time somewhat differently) and also through what viewers bring to the scenes. The mute figuration of minikins contains within that muteness the possibility of rebellion against conformity to type and, thus, a space of decolonization, however small.

María DeGuzmán is Professor of English & Comparative Literature and founding Director of Latina/o Studies at the University of North Carolina at Chapel Hill. She is the author of two books: Spain’s Long Shadow: The Black Legend, Off-Whiteness, and Anglo-American Empire (University of Minnesota Press, August 2005) and Buenas Noches, American Culture: Latina/o Aesthetics of Night (Indiana University Press, June 2012). She has published many articles on Latina/o cultural production, and she writes and teaches about relationships between literature and various kinds of photographic practice. She is also a conceptual photographer who produces photos and photo-text work, both solo and in collaboration with colleagues and friends. She has published essays and photo-stories involving her photography. Her images have been chosen as the cover art for books by Cuban American writer Cristina García and the poet Glenn Sheldon and for books by academic scholars. As Camera Query (solo and in collaboration with others) and as SPIR: Conceptual Photography (with Jill H. Casid), she has shown in the Carrack Gallery, the Pleiades Gallery, and Golden Belt Art Studios in Durham, 523 East Franklin Street in Chapel Hill, the Orange County Historical Museum in Hillsborough, and the Joyner Library at East Carolina University in Greenville, North Carolina; Salisbury University Art Gallery in Salisbury, Maryland; the Institute of Contemporary Art in Boston; the Watershed Media Centre in Bristol, England; Pulse Art Gallery in New York City; the Center for Exploratory and Perceptual Art (CEPA Gallery) in Buffalo, New York; and El Progreso Gallery in Madrid, Spain. She has worked most notably with co-authors and co-producers, Jill H. Casid and Carisa R. Showden. Most recently she has teamed up with visual artist Janet Cooling and is composing original music for Cooling’s highly visual, dramatic lyrics as well as for some lyrics of her own.

3 thoughts on “Mute Figuration of Minikins”