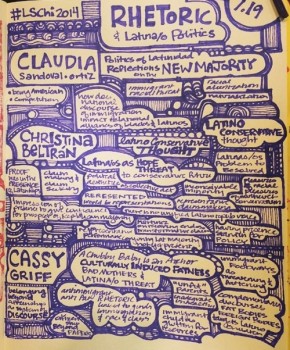 It’s not everyday that new professional and academic organizations are formed. That’s why the decision to join together in a new association, made by over 500 scholars gathered in Chicago for the “Imagining Latina/o Studies: Past, Present, and Future” Conference on July 17, 2014, was a historic moment. As the Program Committee, composed of leading scholars in multiple fields from all regions of the country, stated in the program:

With this conference we hope to spotlight the dynamic work being carried out in a range of disciplines with a particular focus on the interdisciplinary impulse that shapes and motivates work produced under the banner of Latina/o Studies. We recognize the decades-long history and crucial work of national-origin studies, such as Chicana/o Studies and Puerto Rican Studies, from which many of us have emerged; and we further ask how might we conceptualize the field so that it reflects the complex histories, social formations, and cultural production of Latinas/os even while seeking to imagine a larger sense of belonging that might transcend nationalisms?

Fourteen sessions, with eight to ten panels in each session, took place over the three days of this gathering, providing a wealth of rigorous and creative scholarship as well as insights on pedagogy in this interdisciplinary field. The growing establishment of Latina/o Studies Departments in colleges and universities across the country was evident at the gathering, as well as valuable regional networks of Latina/o Studies scholars in many parts of the country. Another indication of the significance of this professional gathering was the participation of eleven academic presses and four academic journals in the book exhibit. Eighteen (18) of the forty-one (41) ads in the program booklet were from Latina/o Studies Departments, programs, journals and presses based in the Midwest, representing a significant new trend in the field. Conference organizers allowed all participants to join in the work of creating a new association by scheduling business meetings over the lunch period. Participants either picked up something to go or took advantage of a limited number of conference free lunches and joined in the business discussions, voting to form a new association, discussing possible names for the new group, deciding on an initial leadership and governance structure, and establishing a Coordinating Committee to guide the next steps. The new Coordinating Committee includes: Elena Machado, Carmen Lamas, Deb Vargas, Raúl Coronado, and Isabel Porras. Along with Frances Aparicio and Lourdes Torres, who will not continue on the Coordinating Committee, this group worked together to organize the events.  Included here are some of the comments and observations of those who participated in the conference. The colorful notes/doodles on conference sessions of Brian Herrera, in Theater at Princeton University – used with his permission — also provide additional commentary here. 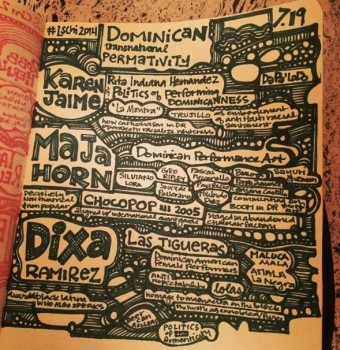 On Thursday morning, July 17, 2014, I was one of “those people” — the members of the audience in a conference session that get thanked because they came out so early. (In this case at 8:00 a.m.) But on that Thursday morning, “those people” were out in droves. The excitement was palpable at the session “Latina/o Representation in Mass Media and Popular Culture,” not only because the papers were riveting and engaging, but because we knew — I knew — that this was a historic moment. The energy at the Palmer Hotel in Chicago was unflagging, from 8 a.m. to 6 p.m. every day. Even our business meetings occupied a crowded Empire ballroom. Things that I deeply appreciated about the inaugural conference of a new Latina/o Studies Association:

Things that I hope we’ll work on in this new organization:

Last but not least, a number of scholars used twitter at this conference, mainly to help get out the word on the sessions they attended. It was exciting to watch the ideas circulate not just in the rooms they were uttered, but out in “the open,” ready to be engaged by wider publics. And Iván Chaar López has archived our #LSCHI2014 in order to preserve those conversations for the archives.

From Luz Baez, M.A., Studies of the Americas, CUNY/City College of New York

First, I congratulate the Conference organizers for coordinating, what was in my estimation, a very successful event. Each panelist was distinguished and presented research in their field of study passionately and eloquently. It was enlightening to hear about the research each is conducting in their field.  There were several that resonated loudly and peak further interest in the subject matter, specifically how the construct of race has evolved and developed in a different space as Latina/os migrate to the South specifically Alabama, Mississippi and Florida; how inequality in media representation distorts the Latino/a image, and creates identity confusion and economic disparities; and, finally, the impact that the Treyvon Martin and George Zimmerman case had on the Latino/a community.  The benefits I received from attending the conference are countless and will further assist me in the development of my research.  Thanks again to the Organizers.  I look forward to the next Latino/a Studies Conference. 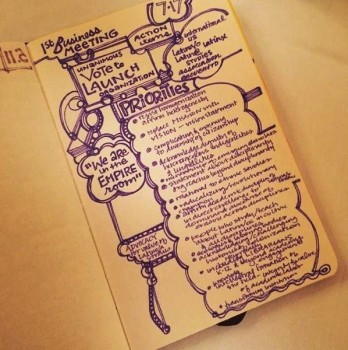 I attended the Latino Studies Conference in Chicago from July 17 to July 19, 2014.  It was the launching of the Latina/o Studies Association; an idea discussed throughout the previous year at national-origin studies conferences (whose focus are Latin American Studies, Puerto Rican Studies and Chicana and Chicano Studies) and the American Studies Association, the Modern Language Association, the Organization of American Historians and the Recovering the US Hispanic Literary Heritage conferences.  The new organization will meet biennially and discuss the shifting landscape of Latina/os (including Chicana/os) in the humanities, social sciences and professional schools. My presentation, in a roundtable/workshop on Mujeres Talk, discussed Chicana and Latina blogs generally, and the work I have done as an associate editor of Mujeres Talk, which is a unique format with a two-editor review of submitted and solicited posts.  Ohio State University Libraries is the hosting institution for the blog. Sessions I attended included:

Librarians from Stanford University, UC San Diego and I moved a motion forward to have librarians as part of the executive leadership structure of the new organization to educate, improve and establish a continued library/archives use among the new faculty entering the ranks of academia. It was a conversation that was well received.

9 thoughts on “Reports from “Imagining Latina/o Studies: Past, Present, and Future””