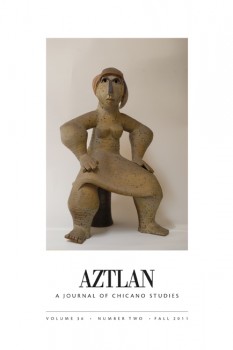 I’m somewhat new to Aztlán: A Journal of Chicano Studies, having joined the journal as assistant editor in June 2013, so I’ve played a very small part in Aztlán’s history, which is now approaching its forty-fifth anniversary. As a part of my position I process submissions and coordinate our double-blind peer review process. Although I’m far from an expert in Chicana/o studies (I’m a doctoral candidate in film studies studying Canadian Indigenous media), the sheer volume of submissions that comes across my desk has given me a sense of the contours of Chicana/o studies—that is, a familiarity with certain themes, topics, and scholars in the field. Of these scholars, perhaps none is more frequently cited than the groundbreaking feminist, queer, Chicana scholar Gloria Anzaldúa. In fact, since 2007, every issue of Aztlán— fourteen issues total—has contained at least one essay or dossier that takes up Anzaldúa’s ideas. Given a longer timeline it would be interesting to comb through earlier issues, although I fully expect that I would see her name appear over and over. The submissions that Aztlán receives engage with the full scope of thinkers and theorists that constitute the rich intellectual terrain of Chicano studies. Still, authors return to Anzaldúa so frequently, and across so many disciplines, that tracing the use of her work offers a window onto the evolution of her ideas in Chicana/o studies, and a sense of the contemporary contours of the field.

In theorizing the “borderlands,” particularly in her groundbreaking The Borderlands/La Frontera: The New Mestiza (1987), Anzaldúa developed a language and set of conceptual tools that scholars continue to employ and debate, building on and complicating her ideas as they are applied to new and different areas. Anzaldúa’s theorizations, which sprang from her lived experience as a Chicana lesbian, produced a methodological framework for making visible subjectivities that are often invisible within unifying constructs such as “community” and “nation.”  In articles published in Aztlán over the past several years, we see Anzaldúa’s ideas driving, for instance, research methods in ethnographic projects that concentrate on social groups—women, the LGBTQ community, and people from mixed racial backgrounds—whose experiences, following Anzaldúa’s “theory of the flesh,” form the terra firma of cultural theory. Studies have, for instance, have employed intersectionality to examine Chicana/o political organizations in order to recuperate into the historical record the complex social dimensions (gender, race, transborder life experiences) that shaped these organizations.

Anzaldúa’s ideas have flourished in jotería and queer studies, where the intersectionality of race, gender, and sexuality is fundamental to the field, as we saw in the dossier on jotería studies in the Spring 2014 issue. In this collection Anzaldúan thought forms a backdrop for nuanced discussions of the history of jotería studies and the growing diversity within this area over the past several decades. Naturally, border studies is indebted to her work, as we see in submissions that explore many types of borderland—national and transnational, physical and psychological, concrete and metaphoric.  More recently, it has been fascinating to see scholars in political science and sociology taking up Anzaldúa’s thoughts to better frame and understand principles of political organizing and inter- and intragroup dynamics—a testament to the value and relevance of her ideas across disciplines.

Anzaldúa’s legacy is seen perhaps most frequently in submissions that examine Chicana/o cultural production. We receive our share of literary analysis, of course—it would be fair to say that among the submissions that Aztlán receives, Anzaldúan thought is applied most frequently to Chicana/o and Latina/o literature. Yet scholars have explored her ideas in other areas too, including the visual arts, performance, and film and media, and even comic books. Authors apply Anzaldúa’s critical concepts of mestiza consciousness, the borderlands, and nepantla, extending them through analyses of the text and its production, and at times challenging these concepts; for instance, where the celebration of “hybridity” is seen as masking the tensions inherent in identities that are shaped by intersecting and sometimes irreconcilable social markers and experiences.

The breadth of scholarship that engages Anzaldúa’s work is a testament to the richness of her ideas and their ongoing relevance to Chicana/o studies as the field continues to expand, embracing more academic disciplines and specializations. As it does, so too does Aztlán, as these shifts and others are reflected in the submissions we receive and encourage. We welcome and invite your essays, dossiers, artwork, and book reviews. Please see our website for more information on submissions and subscriptions. Institutions and individuals with subscriptions to Aztlán can access our entire catalog of issues through Metapress.

3 thoughts on “Aztlán and Anzaldúa”