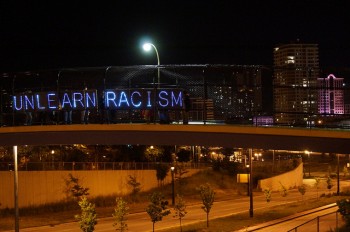 The current debate over immigration policy in the United States revolves around how many immigrants we should let in and what we should do about those immigrants that are here without authorization.

In the contemporary United States, it seems completely natural that we would enforce our borders and regulate the entry of people into this country. Many people believe that the failure to do this would result in complete chaos.

Discussions over immigration restriction first became popular when large numbers of Chinese immigrants began to arrive in the United States during the 1848 Gold Rush.

The arrival of thousands of Chinese immigrants into California provoked nativist sentiments among whites and these sentiments eventually translated into public policy.

In 1875, the Page Act was passed, which prohibited the entry of “undesirable” immigrants. This law primarily was designed to prevent the entry of prostitutes and forced laborers from Asia, and effectively barred the entry of any Asian women into the United States for the next few decades.

Debates over immigration policy in the United States have always had racialized undertones – except perhaps when the laws were outright racist.  The first major piece of immigration legislation was the Chinese Exclusion Act, signed into law in 1882. In an essay titled “The Chinese Exclusion Example: Race, Immigration, and American Gatekeeping, 1882-1994,” Erika Lee argues that

“Chinese exclusion introduced a ‘gatekeeping’ ideology, politics, law, and culture that transformed the ways in which Americans viewed and thought about race, immigration, and the United States’ identity as a nation of immigration. It legalized and reinforced the need to restrict, exclude, and deport ‘undesirable’ and excludable immigrants.” 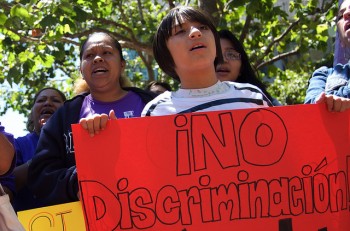 “Niño dice No Discriminación” by JacobRuff. CC BY 2.0

The Chinese Exclusion Act initially only governed entry policies, but worries over fraud and illegal entry gave rise to the 1892 Geary Act and the 1893 McCreary Amendment, which required Chinese people who resided in the United States to possess proof of their lawful right to be in the United States. These “certificates of residence” were the first precursors to today’s legal permanent resident cards. Such documents were required only of the Chinese until 1928, when “immigrant identification cards” began to be issued to all arriving immigrants.

Nineteenth century immigration laws tended to focus on Asian immigrants. By the 1920s, however, the United States no longer depended on the large-scale influx of European labor. Technological advances, which reduced the need for labor, along with rising nativist sentiment in the context of wars with Europe led to increased support for immigration restrictions.

These sentiments translated into legislative action. The 1924 Johnson-Reed Act was the nation’s first comprehensive immigration law.  As Mae Ngai explains in Impossible Subjects, “It established for the first time numerical limits on immigration and a global racial and national hierarchy that favored some immigrants over others” (Ngai 2014: 3).

The quotas set forth in the 1924 Act were based on ideas of white superiority – particularly the superiority of Germans and people from the United Kingdom. Whereas 65,721 visas were allocated to people from Great Britain, Italians were only allocated 5,802 and the Turkish only 226. The quotas were ostensibly based on the national origins of US citizens in the 1890 Census, but they excluded people of African and Asian descent.

The restrictive quotas and laws prohibiting Asians from attaining citizenship were eventually lifted. Today, our immigration policies are ostensibly colorblind.

However, over 90 percent of immigrants in the United States today are non-white, meaning that laws that restrict or provide opportunities for immigrants will have racially disparate consequences.

A Congressional decision to provide avenues for legalization and citizenship for undocumented immigrants would go a long way towards reducing inequality between Latinos and whites insofar as about 75 percent of undocumented immigrants are from Latin America. In contrast, decisions to enhance immigration law enforcement would further restrict opportunities for Latinos insofar as 98 percent of people deported last year were from Latin America.

Tanya Golash-Boza is a 2015 Contributing Blogger for Mujeres Talk. She is on the faculty of UC-Merced and has published books and articles on the topics of immigration, migration, race, racism, transnationalism, borders.

8 thoughts on “Immigration Policy in the US: It’s All About Race”