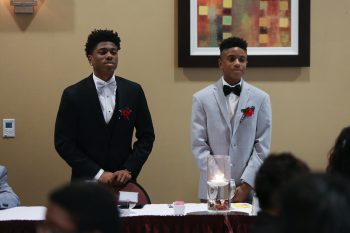 Growing up Latina and Catholic in a large Dominican family, in Compton, California, meant, for me, that ritual was a daily occurrence and a requirement. Attending mass on Sundays and Holy Days, Baptism, Confirmation, First Holy Communion, Quinceañera, and ultimately my Wedding, were all monumental occasions. My abuela would make the extravagant white dress, the extended family gathered for mass at the church, my abuelo would dig the hole in the backyard for the lechón asado that would accompany the feast prepared by the women at my grandparents house. And finally the pachanga complete with dancing merengue with my abuela to make sure I was authentic Dominicana. I always felt my grandmother and mother went overboard with these celebrations. At times it was embarrassing because my African American friends did not share any of these particular ritual celebrations, and often did not understand what was going on and why it was so important. But deep down inside, I expected and appreciated the “Queen for a Day” celebrations.

I was not as diligent in keeping up the customary traditions with my children. No longer a practicing Catholic, I had married a Rastafarian from Suriname, became vegetarian, and danced salsa and hip-hop at my communal gatherings, which my grandmother boycotted. Traditional rituals were translated into contemporary practices. None were in the Catholic Church. My oldest son’s baptism or naming ceremony was held in the living room of our apartment in Oakland, California, with family and friends burning sage, dancing to salsa and reggae, with my sister and brother being recognized as his godparents. My youngest son decided, at 10 years old, he would have a full body water baptism at a lake in Middletown, Connecticut, by our Jamaican Christian pastor. So family rituals would be continued, just not in the way my grandmother expected. 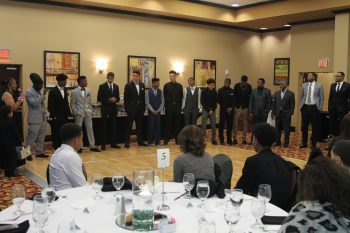 Quinceañera and bar/batmitzvah invitations started coming when Zyan  – my oldest, turned 13.  He and his brother Ezra were attending and participating in coming-of-age rituals. His primas were having confirmations, communions, and quinceañeras, complete with the elaborate white dresses, pachangas, lechón asado, and merengue dancing with Abuela.  At 14, Zyan felt he was missing something and asked, “Why do the girls get the big parties?  What about Ezra and me?” Their father being from Suriname, South America, I imagined their coming of age would be spent with him camping out or traveling to remote places in Suriname doing the rites of passage man-thing that their father always talked about. But we were divorced by then, living in separate states, and a trip to Suriname would not be realized for either of the boys. Noticing that Zyan wanted to be celebrated in as major a way as his primas were, I decided to plan a quinceañera for my son. Evelyn Ibatan Rodriguez (2013) examines what quinceañeras reveal about the individuals, families, and communities who organize and participate in them. She explains the misperceptions of quinceañeras as “overpriced birthday parties” that are actually meaningful family events that immigrants and their children use to “imagine who they are, where they have come from, and who they want to become” (p. 2). This ritual would represent his coming-of-age, rites of passage into adulthood, a communal celebration with his family and friends that would mark his, and my, cutting the proverbial umbilical cord. Since my original vision for him travelling to the bush in Suriname with his father would not be realized, I reverted to my own cultural traditions.

Some family members questioned why I would choose to have a quinceañera for Zyan, since they are traditionally for girls. Other family members, who understood my non-traditional formation of ritual, were happy to comply. After all, they were present at Zyan’s non-traditional baptism held in my living room fourteen years earlier. Friends, familiar with the tradition or other coming-of-age traditions such as debutante ball, sweet sixteen, or bar/bat mitzvah, were enthusiastic about the notion of blurring gender boundaries and establishing a quinceañera for a boy. I saw this as an opportunity to put into practice my womanist and Latina feminist perspectives of what it means as a person of color to self-define how events, ethnic, national, class, generational, and gender identities and relationships are played out, challenged, and negotiated (Collins, 1991; McCaskill & Phillips, 1996; Rodriguez, 2013; Walker, 1983). As Dominican writer Julia Alvarez (2007) explains “the heart of the tradition, a desire to empower our young [women], a need to ritually mark their passage into adulthood, remind them of their community and its past, and by doing so give them and ourselves hope” (p. 6). 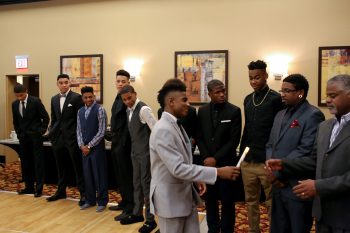 The tradition of quinceañera dates back to the Aztecs 500 BC and is a celebration of coming of age at 15 when the boys would become warriors and the girls would become wives of warriors or a preparation of adulthood (Alvarez, 2007; Learn NC, 2016; Lopez, 2007). The debutante’s cotillion influence was the European version that included the crown, the waltz, the fancy gown, and fifteen dancing couples (Lopez, 2007). The influence spread through the Americas and landed in the United States, permeating all social and economic classes to become a multi-million dollar industry (Alvarez, 2007; Lopez, 2007; Rodriguez, 2013). Somehow, the boys were left out over time and it became the pre-wedding-like celebration for girls, complete with mass, presentations, food, and dancing. Were the boys destined to be the unnamed beneficiaries of the tradition, or merely escorts for participants in it? My ex-husband’s culture had traditions for boys-coming-of-age, but mine did not. As a womanist and Latina feminist, I decided once again to blur lines, revise tradition, and socially and culturally update an ancient ritual. 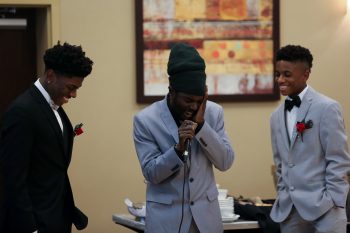 The planning began. I had less than a year to plan my Zyan’s Quince that would be held in Middletown, CT.  I had never before planned a quinceañera, and with my abuelos no longer alive, and my Mom and sisters living in different states, I found myself, once again, inventing a contemporary version of a historical tradition. Zyan’s Quince was held on December 8, 2013, the day of his 15th birthday. The location was a beautiful second floor reception hall in the Student Union at Wesleyan University (where I was then employed). Invitations were sent out using Evite, a band was hired as well as a caterer that could cook Dominican food. I was no longer vegetarian and my New York and New Jersey Dominican family members attended in full force since they were closest to Connecticut, so I had to do right by them and serve lechón asado. As the event was a formal, both Zyan and his brother wore tuxedos. I wanted Zyan to play an active role in both the planning and implementation of the Quince, and for it to have sentimental meaning and value for his transition into manhood. I strongly urged him, and finally mandated him, to interview 15 men in his life on what it means to be “a man” in today’s society.  His interviews were refined into a speech that he, very nervously, gave at the Quince. The 15 men, consisting of his abuelo, papi, tios, primos, coaches, neighbors, friends, and his hermano Ezra, preceded his speech with vignettes about being in Zyan’s life and what it meant to them to see him becoming a man. After the presentation we sang the birthday song, in both English and Spanish, cut the cake, then proceeded to my house for the pachanga. The event was documented, video and photography, which stands as testimony for Zyan, his family, and friends, as a marking of his passage through time and into adulthood. 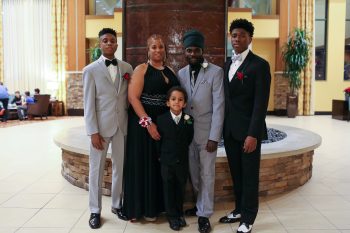 Ezra’s Quince was held on December 5, 2015, two days after his 15th birthday in the ballroom of a local hotel in Columbus, Ohio. This time formal invitations were printed and sent out. The hotel catered the event; Dominican food wasn’t an option. An African American Columbus based youth orchestra, URBAN Strings, provided the music for the reception. While the guests gathered in the ballroom, family members took photographs and were interviewed for the video. A program was printed for the event and crystal party favors were distributed to all the guests. Since Zyan was turning 18 on December 8th, Ezra wanted to include him in the celebration, and we celebrated both the quince and dieciocho. Ezra, being the guest of honor, was escorted into the ballroom by his Abuela Lelis after all the guest were seated, which commenced the formal presentation. One Tia gave the blessing, his Tios imparted words of wisdom, other Tias talked about watching him grow, his papi sang a song, and I recited poetry. Then Ezra introduced 15 men consisting of relatives and friends who came to the stage to participate in Ezra’s lighting of 15 candles. He passed out 15” candles to each participant as they came to the stage, lit each candle to commemorate their support and love for him, and their promise to always be a part of his life. This also symbolized a commitment from them to help him find his way in challenging times. Zyan had 18 family and friends (his posse) stand with him and gave each of them a leather braded bracelet to represent their connectedness and strength. After the ceremony we sang, cut the cake, opened presents, and danced the night away to merengue, salsa, reggae, and hip-hop. 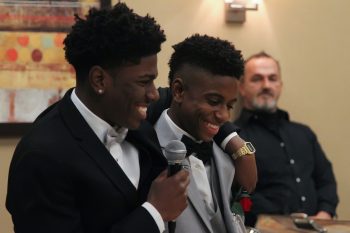 In a time of mass incarceration and senseless murders of our Black and Brown skinned young men, it is mandatory that we celebrate them and constantly remind them that Black Lives Do Matter – that their lives matter.We need to physically, spiritually, and emotionally raise them up in love and show them what community looks like and what it feels like for them to be important to us. The Quince was one way I decided to show both my sons, Zyan and Ezra, that they have community who will always be a part of their lives. It was also a way to create and archive memories for them, symbolizing through ritual and celebration the importance of shaping the men they are becoming.

McCaskill, B., & Phillips, L. (1996). The Child is Mother to the Woman(ist): A Tribute  to Mills College’s The Womanist: A Women of Color Journal. Womanist Theory and Research: A Journal of Womanist & Feminist-of-Color Scholarship & Art. 2(1), 1-3.

Sonia BasSheva Mañjon is the Director of the The Lawrence and Isabel Barnett Center for Integrated Arts and Enterprise at The Ohio State University, where she is also an Associate Professor in the Department of Arts Administration, Education & Policy and an Affiliate Faculty member in the Latina/o Studies Program. Dr. Mañjon works with both undergraduate and graduate students who are interested in arts management, entrepreneurship, community collaborations, institutional partnerships, community arts, and civic engagement activities.

6 thoughts on “A Quince for My Boys: Celebrating 15 Latina Style”