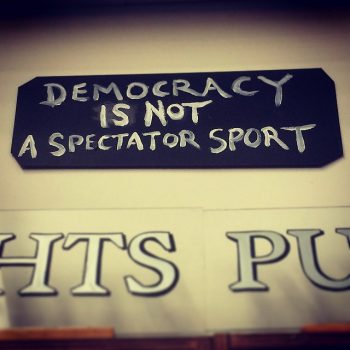 As Latina scholars and activists in the United States, we are alarmed about the recent political and social developments in the country. We can’t help but notice that the new President  has engaged in reprehensible rhetoric against members of different groups in the U.S., and has threatened others. As we witness his selection of future cabinet and administration officials, we note that many of them have also participated in this dangerous rhetoric and often stand opposed to the rights of working people, women, racial and ethnic minorities, religious minorities, as well as the right of all humans to clean air, water, and land. In this climate, we are witnessing an increase of exclusionary language based on race, citizenship status, and religious affiliation, where the everyday realities of racism, xenophobia, and other forms of bigotry, harassment, and violence have been increasingly on full display since the election.

We urge everyone to be proactive and work tirelessly to ensure that this country becomes a place that supports and acknowledges every person in it. We must create a society that actively seeks to be anti-racist, anti-sexist, anti-xenophobic, anti-homophobic, anti-Islamophobic, anti-ableism, and anti-bigotry. We must unite to create mechanisms and structures that combat hate while empowering all constituencies to be active. It is the responsibility of us all to rid our society of bigotry and systemic inequality.

We hereby affirm our commitment to create a society where everyone can thrive. We stand with you, whoever you are, and particularly those individuals of color, LGBTQ, immigrants, people with disabilities, and peoples of all faiths, who are courageously speaking up and fighting for a more just and inclusive U.S. society. We salute the hundreds of thousands of women and men and children who flooded the streets of every town and city in this country this past Saturday, January 21st to declare these commitments openly.

Finally, we urge Americans to document and be vigilant against both individual and state acts of bigotry. We have plenty of historical instances in which entire nations overlooked or failed to recognize these practices as meaningful acts against others, who ended up paying the ultimate price. We should keep history in mind and the fact that over half a century ago we promised to never again allow massive acts of hatred to go unchecked. It is our responsibility to keep that promise.

1 thought on “Mujeres Keeping the Promise of Democracy”