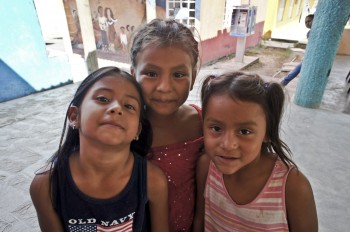 What do we make of a photo of a two-year-old Honduran baby with a bandaged leg stump, the consequence of an accident on the freight train that he and his migrant mother were riding? Or the news stories about the 12-year-old Ecuadorean girl who hung herself in the shower after her attempt to reunite with her family was foiled by the arrest of her guide?

These past few months anyone in the United States who follows the news has seen a torrent of stories and images detailing the suffering of Latin American migrant minors who are brought here by their parents, or who come on their own in an attempt to work, reunite with family, or seek political asylum. As an academic who spent the last year conducting research in Mexican shelters and other facilities that help migrants, I am struck by how few people in the United States make the connection between their own comforts and the pain of others.

Every time I see a Fruit of the Loom ad, for instance, I think of the young woman I spoke to with blisters on her feet from walking for days from the Mexico-Guatemalan border to reach a shelter in Arriaga, Chiapas. In El Salvador she had left her village for a larger city to work in a Fruit of the Loom factory, sewing together my brand of underwear. She earned just enough money to stay alive and keep working, but not enough to feed, clothe, and educate her children. Having uprooted herself once for the sake of work made it easier for her to uproot herself again in hopes of an even better wage in the United States proper – instead of its exploitative outpost abroad. That six-pack of women’s underwear I can buy at Walmart for under $10 depends on the labor of people who are already working for us, even before they physically arrive on U.S. soil. 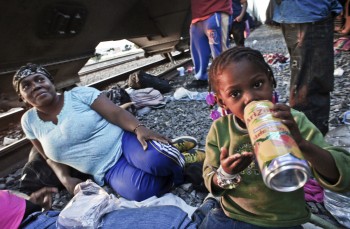 Emotional reactions to this year’s rise in the number of undocumented children apprehended at the U.S.-Mexico border often take one of two forms: sentimental-but-useless compassion or angry rejection. My dentist’s receptionist, like many well-intentioned people, lamented, “It just tears my heart up. I wish I could adopt them all.” Gut-twisting images and horror stories sometimes lead us to drown out the migrant experience in our own tears.

At the other extreme, The New York Times reported that protesters in Murrieta, California, shouted “Go home!” at migrant mothers and children on buses. Protesters opposed to a proposed shelter in Vassar, Michigan, presumably felt so threatened by the migrants that some of them reportedly carried semiautomatic rifles and handguns.

Even President Barack Obama adopted a stern tone: “Do not send your children to the border. If they do make it, they’ll get sent back. More importantly, they may not make it.” It’s difficult to imagine Central American parents hearing this on the news and saying, “OK, since you asked so nicely, I’ll just accept that it’s my lot in life to stay here with my kids, no matter how bad the poverty or the violence gets.” And what about the many minors who don’t ask permission before they hit the road? When we blame the parents, we ignore that most Central American mothers and fathers are doing the best they can to cope with global economic forces and structural violence that leave them on the short end of the neoliberal stick.

Central America is not an isolated, distant region of the world where the United States and its citizens bear little responsibility. Many books have been written on the long, nasty history of U.S. intervention in the region. To recall just a few highlights: in 1954 the CIA sponsored a coup in Guatemala on behalf of the United Fruit Company that destroyed a democratically elected government and plunged the country into decades of genocidal military rule; in the 1980s, the United States funded the Salvadoran military during that country’s civil war, despite the military’s links to right-wing death squads in the service of a tiny upper-class elite; in the wake of the 2009 coup that ousted President Manuel Zelaya from Honduras, the United States provided funding for the police force of Zelaya’s successor, Porfirio Lobo Sosa, despite his ties to the coup leaders and his shaky human rights record.

Not to mention that our consumer demand for illegal drugs fuels violent organized crime networks throughout the hemisphere, some of which also specialize in the human trafficking of Central American minors.

The United States can pressure Mexico to attempt to seal its southern border with Guatemala, but as Father Alejandro Solalinde, the director of a shelter for migrants in Ixtepec, Oaxaca reminded me, “People will migrate when they have to regardless of what governments try to decide for them, whether they pass immigration reform or build more walls.”

What if we were to think of undocumented migrant children neither as the heart-string tugging heroes of (let’s face it) entertaining melodramas featuring poor innocent, vulnerable children on dangerous adventures nor as the germ-ridden children of villainous criminals invading our country (depending on your point of view). What if we expend more of our energy on figuring out how to respect their rights? The Obama administration’s recent decision to interview some Honduran minors in their home country to determine whether they qualify for refugee status will not provide a perfect solution, since few children are likely to meet the stringent qualifications for a very limited number of visas. But at least it conceives of children less as objects of our own love or hate and more as persons with human rights under international law, persons for whom we bear an undeniable responsibility.

Ana Elena Puga is an Associate Professor in the Departments of Theatre and Spanish & Portuguese at The Ohio State University. She is working on a book, Staging Migrant Suffering: Melodrama in Latin American and Latino Activism, with sociologist Víctor M. Espinosa. Their 2013-14 research in Mexico was supported by a Fulbright fellowship.