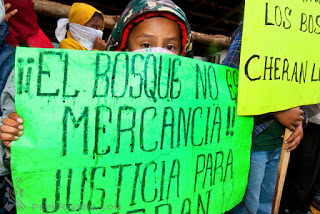 Yesterday, as I continued my work on translating an oral history interview from Spanish into English, I was struck by something that this particular participant in the project said – as I often am in this work. I’ve had the honor of interviewing some very wise and determined Latinas in the project that I began in 2008 to collect the oral histories of Latina leaders in Milwaukee, Wisconsin. These are some very interesting women! Fortunately, I am near the end of the editing and looking forward to sending it off the publisher soon. To get back to my point: my interviewee, commenting on the social customs of Mexico and the U.S., says at one point, “There it is the same as here, exactly the same as here. The only difference is that there is still a fiction that in Mexico it’s different.” She was talking about the acceptability of divorce, but it resonated with me on other levels, such as the changes in daily life, work and environment, partially because there was some interesting news from Mexico recently in the The New York Times about a group of indigenous women in Cherán, Michoacoán, who mobilized against armed illegal loggers and are now defending their town from violence and their forest from deforestation. To readers of Latina/o literatures, or literature about migration, the name Cherán might be familiar, since it was one of the sites of migration to the U.S. portrayed in Ruben Martinez’s Crossing Over: A Mexican Family on the Migrant Trail(2001). The August 2, 2012 article by Karla Zabludovsky titled “Reclaiming the Forests and the Right to Feel Safe,” describes the events in Cherán and the women’s actions as “extraordinary” as it details their effectiveness. Motivated in part by the loss of the beautiful forest that was once their patrimony, a loss that must be visible to them on a daily basis, the women see themselves acting not only for themselves but for future generations. When I read it, I wondered, and not for the first time, if Luis Urrea’s novelInto the Beautiful North (2009) hadn’t come to life – because this is not the first instance in recent years of Mexican women taking the lead to end violence and environmental destruction. Meanwhile, New York State is set to join the ranks of states allowing fracking. In an August 19, 2012 CBS News Report, “New York State to Allow Fracking,” Jeff Glor’s article notes that the process of fracking releases dangerous contaminants that have high potential to endanger air and water supplies, yet quotes local farmers who need the money. The women of Cherán, Michoacán, also need money to live and they are supported in part, according to the article, by remittances from residents who have migrated to the U.S., yet it seems they are living in the aftermath of a disastrous environmental decision and working to make it right. Like the people of Cherán, Michoacán, Mexico, we face some very difficult decisions in these energy-gobbling times, and we might consider what we can productively learn through a comparative perspective that doesn’t consign indigenous women to a lost past, but instead examines the experience of both residents and migrants from particular regions about what doesn’t work – because as my interviewee says: “There it is the same as here, exactly the same as here. The only difference is that there is still a fiction that in Mexico it’s different.”

Theresa Delgadillo is on the faculty at Ohio State University.