By Andrea Romero and Michelle Téllez

On May 5 2011, a small group of faculty from the Arizona Ethnic Studies Network gathered in Tucson following a devastating Tucson Unified School board meeting where the Mexican American Studies program in the district was ended. It was a blow that was felt deeply by us all. We came together as scholars from universities and colleges across the state to publicly voice our support for Ethnic Studies. This was in the aftermath of HB 2281 that banned courses that “(1) promote the overthrow of the U.S. government (2) promote resentment toward a race or class of people or are (3) designed primarily for pupils of a particular ethnic group (4) advocate ethnic solidarity instead of the treatment of pupils as individuals” (AZ House Bill 2281, 49th Legislature, 2010). This bill was used to target, monitor, and dismantle a successful Mexican American Studies curriculum, despite the fact that external auditors determined that the courses were academically successful and promoted positive group interactions (Cabrera, Millem, Jaquette & Marx, 2014; Cambrium Audit, May 2, 2011). In response, we worked as a network to ensure our critiques were made public and to support those teachers and students who were being directly attacked. It was from this source of collective action that we drew strength, and from these activities was born new research, new relationships, stronger students, and a highly aware and involved community. 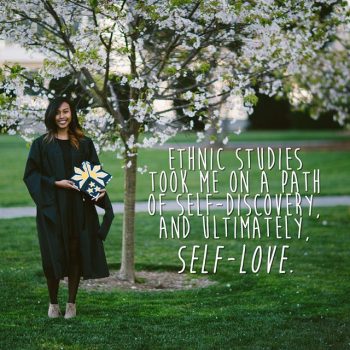 We find ourselves again at a point in U.S. history where higher education is under conservative scrutiny and new “watchlists” for “dangerous” professors are being created and used to threaten and intimidate scholars in the academy. We live in a country that has been shaped by a particular history of exploitation, genocide, and exclusion. In this, Arizona is not an anomaly, but the norm. However, given the legislative battles we have had in in this state over the last six years, it seems important to comment both on our experiences and on what we imagine our role as Ethnic Studies scholars to be in the coming years given the emergence of what mainstream media END_OF_DOCUMENT_TOKEN_TO_BE_REPLACED

The February 7, 2012, episode of Glee, titled “The Spanish Teacher” features Ricky Martin in a guest appearance as David Martinez, who, as a Latino teacher of Spanish, becomes a rival to Will Schuester (Matthew Morrison) for both the affections of the Glee students and a tenured spot on the teaching staff. The episode opens with Mr. Schuester recognizing that his annual rendition of “La Cucaracha” on “Taco Tuesday” has been an embarrassingly tired class lesson. Alerted by the principal that a tenured teaching spot is opening up yet facing complaints over his glaring inabilities in teaching Spanish, Mr. Schuester tries to quickly improve his chances by taking Martinez’s Spanish class in night school, and recruiting Mr. Martinez to assist him in teaching the kids Spanish through Glee Club.

The students quickly become enamored of Mr. Martinez’s language teaching skills and knowledge of Latina/o popular culture, and they demonstrate this learning in bilingual performances of Gloria Estefan’s “Si Voy A Perderte (Don’t Wanna Lose You)” and a mash-up of the Gipsy Kings “Bamboleo” and Enrique Iglesias’s “Hero.” Student Santana Lopez (Naya Rivera) calls attention to the contrast between, on the one hand, Martinez’s sophistication and savvy about Latina/o culture and language and, on the other hand, Will Schuester’s hackneyed, stereotypical representations of Latinas/os and Latina/o culture in his Spanish classroom. Santana engineers a showdown by challenging Mr. Schuester to defend his Spanish teacher honor in performance, and he accepts Santana’s challenge to produce a Glee Club number that demonstrates his competence, “coolness” and masculinity. In the Spanish teacher showdown, Santana joins Ricky Martin as Mr. Martinez in Madonna’s “La Isla Bonita,” a performance that seems to call into question the heteronormativity of the song given the sexuality of both fictional character and actual performer. Schuester does a Mariachi inflected performance of Elvis Presley’s “A Little Less Conversation” in Spanish, wearing a full matador costume. Santana’s role in this episode is interesting. Her anonymous complaint, though it eventually leads to the right spot for everyone involved, is taken by Schuester as a betrayal, and in a concurrent storyline in the episode Coach Sue Sylvester (Jane Lynch) also accuses Santana of betrayal on the false assumption that it was Santana who complained about Sue’s teaching. The notion of Santana as Malinche is upended, however, when both Will and Sue are shown to have been wrong about Santana. The episode thereby heightens its focus on a Latina/o student making an apt critique that hints at unspoken levels of discrimination, as it plays with notions of masculinity and norms governing gender and sexuality.

Jeremy Wetzel, who writes regularly on Glee, addressed the characterization of Schuester as incompetent, taking seriously the fictional show’s setting in Ohio: “However, such hiring practices have not been realistic in Ohio, or almost any other state, in quite some time. There is no way that Will would be hired to teach a foreign language without majoring in it in college and passing tests. The educational process in Ohio is pretty strict and he could not teach a subject he knows nothing about. As such, the entire episode is completely ridiculous.” (Jeremy Wetzel’s TV Review of Glee episode “The Spanish Teacher” on Gleekonomics web site, February 8, 2012). Wetzel overlooks the real issue in the episode, which Santana highlights when she tells Schuester: “you don’t even know enough to be embarrassed about these stereotypes that you’re perpetuating.” The issue is language but it’s also cultural competence when Latina/o students are in the classroom (or in our increasingly Latina/o future, as Mr. Martinez notes in his first lesson). Santana objects to what scholar Ana Celia Zentella calls the chiquita-fication of language. In this way “The Spanish Teacher” seems relevant to the recent ban on Ethnic Studies courses in Arizona K-12 education and the Tucson Unified School District’s banning of books by renowned Chicana/o, Latina/o and Native American authors. Could this be a pro-ethnic studies twist? Or is it about evaluations of teaching? What work is popular culture doing here?

Santana’s critique of Will Schuester is one that students in Arizona are now leveling: you don’t know our history here, our cultures, our languages, our literatures. Santana asks to be taken seriously as a Latina/o student in her school and asks that Latina/o studies be taken seriously. In the end, Schuester gets it, ceding his post to Mr. Martinez who he recognizes as the real expert (this is fictional, folks) and taking up teaching in his true passion – history (hmmm, what’s the subtext there?), while fiancée Emma Pillsbury (Jayma Mays) is awarded the tenured spot for her steady and dedicated work in health education (which Schuester previously derided as silly and gimmicky). A happy ending even for Latinas/os in this fictional Ohio school.

Theresa Delgadillo is Mujeres Talk Moderator. She is on the faculty of Ohio State University.