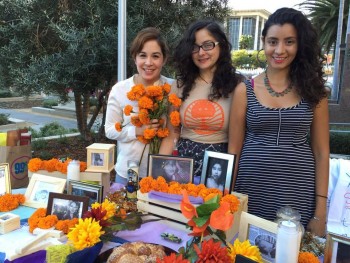 My Testimonio of Coming Full Circle

Coming full circle is when your activism leads to your scholarly work, and that leads to your community work and career. And you continue cycling through this rotation in different ways during your journey. For me, at the center for each of these intersecting worlds and coming full circle is healing through community–recognizing myself and my own struggles in the testimonios of my sisters, brothers, and all my relations who connect and build together to produce critical work and uplift our struggles to heal our mundo. The connections among us are numerous. Recently, I’ve considered a few examples of this “full circle” in my experience. One is when my friend from UC Santa Cruz Edith Gurrola invited me to speak about my documentary Justice for My Sister and its violence prevention campaign at Comisión Femenil in the San Fernando Valley.  After the talk, I spoke with Rosemary Muñiz, College Admissions Adviser at CSUN, and realized that we had met at the Comisión back in 2007 when they hosted my student group Speak Out For Them (SOFT) at their event to denounce the unsolved cases of las muertas de Juárez. Another was hearing

Lourdes Portillo, the filmmaker who created Señorita Extraviada, in an academic context and getting inspired to co-found the club Speak Out For Them (SOFT) with my friend Joanna Kibler. Yet another example of “full circle” in my life was running into my mentor Maria Soldatenko at a march in Guatemala. Many years before that Soldatenko had introduced me to Lucia Muñoz from MIA, Mujeres Iniciando en Las Americas, who holds trainings for Men Against Feminicide in Guatemala. One final example is when MIA advocate Marina Woods introduced me to JFMS Collective members in Guatemala in 2011 and later joined our retreat in Los Angeles to train us on Gender 101 in 2012. Full circle. Every time. 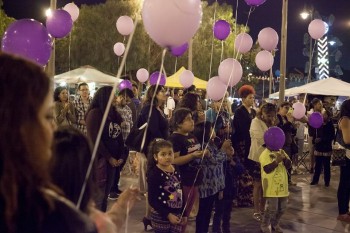 These “full circle” moments are about the importance of creating community. With my film, I commit to continuing that work by screening the film annually with our SiStars from Mujeres de Maiz at the Boyle Heights Farmers Market and hosting a series of Healthy Relationships Panels with the Justice for My Sister Collective and our partners in Los Angeles. These events gave us advocates and activists a chance to have meaningful conversations about our own relationship histories. These talks led to other conversations about community accountability. Community accountability, through transformative justice can lead to healing, and more creative and love-centered approaches to breaking cycles of violence. It provides an alternative to the prison industrial complex, which has historically criminalized men, women, and gender non-conforming individuals of color and torn our communities apart.

Let me take a step back to explain why healing through community is so important to my journey.  Justice for My Sister is my award-winning documentary about violence against women in Guatemala. It follows the story of Rebeca during her journey to hold her sister’s killer accountable in spite of victim-blaming and impunity.

When I was in the field during production, I was targeted in a home invasion where my equipment was stolen and I was raped at gunpoint. The ringleader of the operation threatened to kill me. I realized then that the film had to be much more than an advocacy piece. It needed to be part of a larger solution to actively prevent gender-based violence through leadership development where participants (both women and men) are trained to become resources to their peers. It’s for this reason that our educational materials are tailored to a variety of audiences: mothers of young children, youth (young women and men), police, judges, lawyers, religious communities, Indigenous communities, survivors of violence, and men who work in male-dominated industries.

At the core, this documentary and the curriculum created inspires entire communities to empower themselves by understanding how to identify the different forms of violence, as well as how to offer solutions. As part of the film screening, we develop local resource guides (many audiences otherwise don’t know where to go for help) and we emphasize the importance of healthy relationships. We emphasize that “healthy relationships” within community extends past intimate partner situations: it encompasses relationships in family, friendships, work, and lucha. It means we listen attentively, ask questions, speak from the heart, give space to others, and stand our ground (read: set and maintain boundaries). Self-care is also fundamental to achieve healthy relationships in community. We must sometimes retreat, sleep, replenish, and reflect in order to be fully present for others and continue in our (beautiful) struggle for equitable exchanges in our everyday interactions and in our overarching narrative in our fight for a more equitable society, free of victim-blaming, where we can individually and collectively reach our full potential.

In the making of the documentary, I was concerned with creating an ethical representation of Rebeca and her family, whose story we follow. It was very important for me to develop a good relationship with them in a humble way, keeping in mind that I was entering a very sensitive moment in their lives where they were recently exposed to live-changing trauma.  The unity that we developed with each other surface in the film, and this is why the story resonates with audiences. Rebeca became a support for me when I was subject to abuse, and she helped me frame the narrative in my mind so that I could see myself as an empowered individual. She helped me keep my vision in mind during my healing process, which continues to this day. That has been an enormous source of strength.

Also, Rebeca is very relatable: many people understand the nature of fighting for someone you love and the struggle for justice in the face of all the odds. Rebeca’s heroic determination is very empowering and the truth is, many people are hungry for these stories to be on screen, because sadly Rebeca’s fight is one of many–we just simply don’t see it often on the screen because the mainstream media places more value on the lives of the affluent. 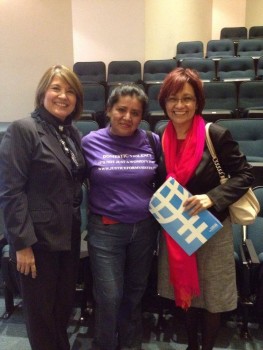 Shero Rebeca Eunice Perez (donning a shirt from our Collective in Los Angeles) meets
representatives from UN Women in Guatemala after an inspiring talk at a university
in Guatemala City. CC BY-NC-ND 2.0

It was important for me to follow Rebeca in particular because she’s a single mother of five from Escuintla, a community rarely represented in popular media. She’s a woman who descends from Indigenous folks, who identifies as costeña, who obtained a sixth grade education. She makes tortillas for a living, and essentially became an advocate and investigator for her sister’s case. She was determined to hold her sister’s killer accountable, an almost unimaginable task in a country where 99% of men who kill women are never punished, and often times, not even investigated. Rebeca’s determination and courage in the face of threats and intimidation on behalf of the suspect, and discrimination and objectification on behalf of the state, is inspiring. Audiences who have had the privilege to meet Rebeca at a screening approach her as a role model, and can’t help but hug her.

The feature-length documentary has been on tour in Guatemala with advocates from the Justice for My Sister Collective since we had a rough cut in late 2011. Every time we screen it, audiences come forward to break the silence and share their own stories. In 2013, I decided I wanted to document some of the other stories to highlight the far-reaching impact of gender-based violence and bring more visibility to other cases as well. Many of the stories in our web series are of survivors that had seen Rebeca’s story in the feature documentary and decided they also wanted to share their stories. Again, coming full circle. We want to offer survivors a platform to share their stories, casting aside blame and shame (as the historically typical narrative would have it), and in turn break the silence and disrupting the hegemonic, heteronormative, white supremacist, imperialist, victim-blaming narrative.

We should all feel passionately about eradicating gender-based violence, because gender-based violence affects many communities in distinct ways. And if you’re doing nothing, here’s your gentle cue to get centered so you can work on empathy a bit more. I know mainstream occidental culture has worked hard to program empathy out of us, but we just have to focus on our humanity a few moments a day to reclaim it.

In Ecuador there’s a chant: “Si tocan a una, nos tocan a todas.” “If they touch one woman, they touch us all.” This is true anywhere that men get away with these crimes; impunity gives aggressors a sense of entitlement or a license to abuse or even kill in some cases. Sometimes it feels daunting because there’s a lot of work to be done. That’s when seeing the human impact of the campaign is most heartening. Through the production of Justice for My Sister, the film’s campaign materials, and the support of Community Partners, we have provided a platform for women to lift up their voices and be heard, which is very healing when you’ve been silenced and your story has been challenged or questioned. The feedback we’ve received from survivors of abuse, their children and their families assures us that we’re on the right path.

Kimberly Bautista is a Colombian-Irish-American feminist, filmmaker, and community organizer based in Southern California. Her feature-length documentary film, Justice for My Sister, has screened in over 20 countries as part of a transnational campaign to prevent gender-based violence. The film has won several accolades, including the HBO-NALIP 2012 Documentary Filmmaker Award, and Best Documentary at film festivals in Holland, Bolivia, Guatemala, France, and Los Angeles. She has spoken as an expert on the topics of gender-based violence and representation of women and girls in the media at the United Nations Office at Geneva, and at the INternational PUblic Television Screening Conference (INPUT) in El Salvador. She acted as jury member for the Connect the Docs Transmedia Pitch Competition at the 2013 Hot Docs Conference & Forum in Toronto, Canada. She is the Project Lead for the Justice for My Sister Collective, a project of Community Partners that uses an arts-based approach to create safe spaces within marginalized communities to initiate collective healing and develop local leaders to combat gender-based violence.

To bring the film Justice for My Sister to your campus, organization, or film festival, email justiceformysister@gmail.com. To purchase a copy of the film and study/discussion guide, please see: http://newdayfilms.com/film/justice-my-sister END_OF_DOCUMENT_TOKEN_TO_BE_REPLACED