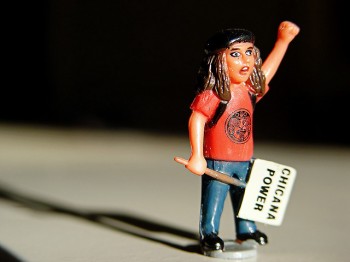 A few months ago, while I screened Sylvia Morales’s La Chicana (1979), a film about the historical and contemporary roles of Mexican and Mexican American women in the United States, it hit me that before this film no one had pieced together a comprehensive look at the continuities between Chicanas and Mexicanas on both sides of the U.S.-Mexico border. Sitting in my class, along with ninety of my students, I realized that Morales was among the first to create a documentary on the lives of women of Mexican- and indigenous-descent as they shaped and influenced the histories of their families, communities and societies through the eighteenth, nineteenth and twentieth centuries. It also struck me that no one had done anything similar since then. Morales’s follow up thirty years later, A Crushing Love (2009), for instance, focused primarily on a smaller group of Chicanas. Today, we have yet to see a comprehensive film tracing women’s roles and relations in areas of the economy and polity as well as in the cultural and social life of Spanish-speaking peoples. In my view, this is a sad commentary on the state of Chicana and Mexicana history in film.

Unfortunately, the PBS Latino Americans (2013) series does little to rectify the gaping hole in the filmic representation of Chicanas, Mexicanas and Mexican American women, particularly in the first two episodes. It is true that women are mentioned and do appear in the Latino Americans series, but it is as members of the elite or as “women worthies.”  Seldom are the ordinary women’s lives rendered in a way that gives us a sense of what their lives were like in the nineteenth or early twentieth century. Moreover, in no instance do the early episodes in the series focus on the role of gender and sexuality in shaping conquest and colonization – a theme explored by many historians of Spanish-speaking women in the eighteenth and nineteenth century. Antonia Castañeda for instance, has described vividly the ways in which Spanish soldiers’ rape of California Indian women was part and parcel of the Spanish Crown’s attempt to retake control of its northern territory. Those same acts of war, however, nearly threatened the entire enterprise when California Indians launched repeated reprisals against the indignities suffered by their communities. Gender, as many scholars now agree, was pivotal to many other areas of life, including family and community formation, inheritance, and family networks as well migration and immigration. However, the film granted little attention to the ways in which ideas about men and women’s roles in their families, communities and societies influenced Spanish-speaking communities.

As a historian, I recognize that Latino Americans addresses many of the themes I cover in my Chicana and Chicano Studies introductory courses, and does so in a way appealing to a general audience. I enjoyed, for instance, learning about the personal experiences of repatriation as told through the eyes of the woman whose family was returned in 1935 when she was a young girl. I found her story heart breaking and not just because she — along with up to 500,000 peoples of Mexican-descent – were forced to go to a country many of them had never known before, but also because of her mother’s earlier death to tuberculosis, a disease that ravaged Mexicanos living in Los Angeles at the time. Motherless and now landless, she and her family were forced to come to terms with survival. I was left wondering as to how the loss of her mother had re-arranged their family dynamics and how it impacted her in the long term. While we learned that she left school to help her father, we know less about how that experience shaped her future as a young woman coming of age in Mexico and later, the United States.

I note these gaps not to blast the “failures” of the Latino Americans series, but rather to remind us and everybody else that we – as members of the public — still have little understanding of the ways in which gender and sexuality shaped Spanish-speaking communities in the U.S. Southwest. What we need is a richly textured, nuanced and in-depth filmic representation of Chicanas, Mexicanas and Mexican American women in the past and present. We currently lack representations of Latinas in all their diversity, including regional, racial/ethnic and class status. Such representations are long overdue. It is my hope that the Latino Americans series has inspired others to take a long look at the role and relations of mujeres shaping their families and communities as well as the larger society. These are stories that still need to be told.