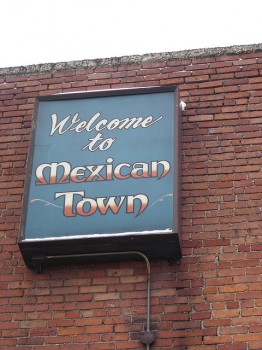 I am an elected member of the Detroit School Board under an emergency manager. I am also a candidate for Detroit’s 6th Representative District. Entering the race is a victory in itself. I am running without the giant funding the other candidates have, but I am running as an act of public service, to speak truth, to stand up for our elders who were intimidated out of public participation and remained private. It was during the late 1970s in the Chicano Boricua Studies classes at Wayne State University (CBS-WSU) in Detroit that classmates and I began to put together the story of this intimidation. We began to understand what happened to our families and why they acted as they did. This became essential to understanding where we are now and how it came to be that we have so little political power in Detroit and Michigan.

Mexicans began arriving in Detroit en masse around 1920 to respond to a call by Henry Ford’s auto plants. The promise of $5.00 per day and the chaos of the Mexican Revolution converged to send Mexicans north.  Approximately 15,000 Mexicans came to Detroit, including my grandparents. My grandfather married my grandmother, Elisa Hernandez Carranza in San Antonio Texas where she had been working as a governess for an American family who had brought her from Mexico to care for their children.  He worked on the railroad in New York and in Kansas and was drafted into World War I.

Here in Detroit, they started their family. My grandfather was fortunate to get hired by Ford, but with uncertain times, he was laid off in 1922. He worked odd jobs to support the growing family. When the Depression hit, as we have now learned, the welfare department came knocking on Mexican’s doors. Their four children were born in Detroit already when the deportations came.

Between 1929 and 1939, one million Mexicans – 60% of who were born in the US – were “repatriated.”  This is not the word for all; many who were born here and kicked out were depatriated, a word now used in our research of this sad period. This was done through a program cooked up  and never codified into law – to scapegoat a people and blame them – the most vulnerable and conspicuous (race, culture, language), rather than an economy built on a house of cards in a system riddled with contradiction and greed. A discussion for another time, but noteworthy here, is a comparison to today’s Detroit pensioners and the privatization of our city. Nearly identical play books were used for the hate mongering justification of removal of a people through state power and theft of pensions.  Racism is an essential for carrying off such a feat.

My family, like thousands of others, went back to Mexico. I have spent my life getting this story. Mexican Detroit was hardest hit between 1930 and 1932 because of industry recruitment in the better days of the early 1920s; so there were many to seek and many to deport.  It was when I was in the CBS-WSU program in the late 1970s that I learned about the repatriation from reading  Abraham Hoffman’s “Unwanted Mexican Americans.” When our little local Detroit Oral History Committee, made up of repatriados and descendants reached out to scholars Francisco Balderrama and Raymond Rodriguez, they came to Detroit for a book signing and then wrote a second edition with much of their research on Detroit included.

We do not know how many of those repatriated returned.  We do know that many died along the way back and that many did not come back to Detroit; they went to other cities. Others returned during the Bracero Programs and found out then that they were US born repatriados. We lost track of thousands of our people in that decade and beyond. Children born here were not always told they were US citizens and lived their entire lives without ever claiming their birthright.

It was in the 1970s that the Chicano Movement gave rise to our pride. It was a time when we realized that our elders had been treated badly for things they did nothing to deserve and that our culture and language were to be embraced, not rejected. And it was a time for a new influx of Latina/os. In 1974, there were demands for bilingual education in the schools and Michigan passed the law for bilingual education.

Because we were based in an auto industry where no formal education was needed to make a good living, we had few Chicano or Latino people to fill the jobs of bilingual teachers and administrators. Detroit was considered the Promised Land because one could come here and change one’s life without changing one’s class. Thus, we had few college grads that could be teachers. Chicanos/as arrived in Detroit from Texas, California and New Mexico to fill the need. The 60s and 70s in Detroit, like the rest of the world, ushered in a new day for many oppressed peoples. Latinos here saw the passage of the Bilingual Education Act, the creation of new community based organizations run for and by Latinos and the creation of Latino en Marcha, later to become CBS-WSU. Many of today’s agency directors came through this important leadership/ academic program.

Among the organizations that came into existence in a heavily Mexican and Latino populated southwest Detroit were:  LASED (Latin Americans for Social and Economic Development), SER, (Service, Employment, Rehabilitation), CHASS Clinic (Community Health and Social Services) and Latino Family Services.

LASED was created as an incubator to start other projects. Its mission was to get Latinos included in positions where we had previously been excluded: government, civil service and education. It was the primary advocacy agency that sued the State Department of Education for failure to provide language instruction to Spanish speaking students, thus ushering in bilingual education. There was an active Brown Beret chapter here as well as a thriving UFW boycott office. The UAW was a strong supporter of the farm workers, so our autoworker parents were part of the growing UFW movement for justice in the fields. We were part of a movement that uplifted us; no more hiding who we were.

At the same time these organizations were forming, another community organization formed called Southwest Mental Health (SMH), now known as Southwest Solutions (SS). Its director, unlike the Latino agencies, was and is non-Latino. It is important, also to note that most of the people who started these organizations in the 70s are still there, either as board members or as directors. In 1979 SMH began to expand its mission into housing. It has since acquired hundreds of properties located in the Latino community and again expanded its mission far beyond mental health. It includes its own housing office, real estate corporation, construction company, its own mortgage lender and educational contracts and has also expanded into health care, having opened its own clinic in SW Detroit.

An elder activist in our community, Sister Consuelo Alcala asked me to look into why the Latino agencies were losing so much ground to SS. She had been part of the creation of the agencies and was concerned that the existing Latino agencies were receiving very little funding now from their traditional sources: the United Way of Southeastern Michigan, the Neighborhood Opportunity Fund, etc. While the buildings and the organizations still exist, they are shadows of their former selves. The services once offered by LaSED, CHASS, SER, Latino Family Services all are now offered by the mega non-profit Southwest Solutions, who are also the largest landlord in the community.

I set out to interview the directors of the agencies, not sure how to approach an issue which many in our community had quietly complained about for years. We decided the best way to present our findings was to hold a hearing on the issue of hegemony in SW Detroit. This is where we learned how much influence the philanthropic world truly wields in Detroit and its negative impact on the Latino community as well as its impact on our ability to get our own people elected to office.

Our first Detroit Latin/o elected to office was Representative Belda Garza D-8th District in 1998. She was a determined political outsider who won, making history for Detroit. Her second term she ran unopposed, but the third term she was beat by a non-Latino, followed by his staff person who were both term-limited. The now heir apparent in the race is also non-Latina/o. Lots more money than our community has ever seen is in the mix now. Very little is left of public life in Detroit. As we speak, our trash pick up has been privatized, our water is about to be seized and pensions are up for grabs. The Detroit News reported that the heads of the foundations that rule Detroit met with the bankruptcy judge but because they are private entities, they do not have to report what they talked about. Our lives. Privatized. I mention this because our political races have been privatized; the nonprofits  (banks in drag) control all public life.

My first action as an elected school board member was to stop the efforts of the non-profits that went to city council and asked them to abolish the school board and put it under mayoral control, the first move before dismantling public education and parceling it out to charter schools. Jones Day, a bankruptcy law firm has replaced the government in Detroit; there is a  possibility of taking away Detroiters’ pensions to pay illegal swap loans to the banks it represents. I am running as an act of public service. To speak truth, to stand up for our elders who were intimidated out of public participation. Entering the race is a victory in itself, a victory of embracing public participation.

[1]  B alderamma, Francisco E, and Raymond Rodriguez.  Decade of Betrayal: Mexican Repatriation in the 1930s. Albuquerque: University of New

Elena Herrada  is a lifelong, second and one half generation Detroiter and daughter of a repatriado family (Detroit-Aguas Calientes-Detroit). Herrada is the daughter, granddaughter and mother of auto workers and an urban activist, critic and feminist. She is a co-founder of Fronteras Norteñas, an organization which chronicles the life of Mexicans in Michigan and a co-founder of Centro Obrero de Detroit, an immigrant rights organization formed in 2006. Herrada teaches at Wayne County Community College, volunteers with LASED ( Latin Americans for Social and Economic Development) teaching ESL and worker rights. She is currently running for State Representative in House District 6 on a platform of defense of public education and freedom from emergency managers for all communities of color and the restoration of their voting rights.