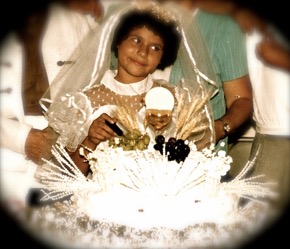 It is Lent and so it is that time of year when my mother pleads, “Hija, go to church this Sunday.”  For years I have tried to make my mother understand that I no longer “go to church” by choice. My repeated efforts to attend Catholic mass as an adult have yielded only unease, a sense of acting out of unfathomable obligation. What I dare not tell her, however, is how much I actually miss it. How much I wish I could believe and truly engage the Holy Spirit that she, following in the steps of my querida abuelita, so wholeheartedly embraced. Like many families from Latin America, it was the women who carried on the lived religion in my family. I remember my abuelita’s wrinkled hands moving her rose petal rosary, her thumbnail rhythmically gliding the beads that after years of use still emitted the smell of roses. Indeed, the aroma of fresh flowers continues to remind me of my own days of “ofreciendo flores” or offering flowers to the Virgin. Growing up, we attended mass every Sunday. My amá had me in catechism, I was an altar girl and took confirmation classes, even though I was confirmed in Mexico at the tender age of two (because as a Mexican Catholic I had no choice).

As a young adult, I could not personally reconcile the directives of a parish priest who barred teen girls from wearing make-up to mass or the passive reception expected of religious women toward their ministerial leader, a male priest. My mother, my abuelita, the women of the faith were the ones solely responsible for maintaining the faith at home, and yet they were hardly ever recognized by the institutional church for their commitment. Moreover, the presence of the Holy Spirit was never felt in the pews listening to yet another lecture from the pulpit. I felt spiritual presence in warm embraces, Sunday carne asadas, and the sounds of familiar alabanzas (hymns) and none of these things were ever talked about during mass. I realized now that what I was feeling was what Mujerista Theology noted as lo cotidiano, or the every day lived religion. Even though I left the organized Church, I still find light and warmth in the way people gain spiritual comfort, healing, and belonging from their faith.

Much to my mother’s surprise, I study religion and its social impact on Latino immigrant communities. Much to my own surprise, I voluntarily chose this path. I can recall the first time I felt called to voluntarily step into a church for research purposes. In 2003, Chicago was the site of national tour of the Tilma de Tepeyac religious relic, a 17th century statue of the Virgin of Guadalupe carrying a glass-encased piece of the tilma. At Our Lady of Tepeyac Parish in the Little Village neighborhood Mexican Catholics knelt down at the pews to pray for hours. As I observed their prayer I could not help but feel moved. Moved not by the presence of the relic, but the power of faith. Watching old and young, male and female pray brought me to tears. I sat there wishing I could be the Catholic my own mother wished I was.

Not long after this moment in Chicago I realized that my being agnostic does not deter from my interests in faith and Latin@ communities. I may not necessarily agree with the tenets of most organized religion, but I can appreciate the value that lived religion has on strengthening people’s lives. For the populations I study, faith provides material and emotional stability in an otherwise unstable world. This might seem crass or reductionists, but for me (a non believer) it helps to situate how religious faith serves a purpose in people’s lives. In this way, I could study faith and its role in religious communities without necessarily getting into the politics of accuracy or ranking religious beliefs.

This finessing of skepticism with appreciation has been more than valuable in my current research project on Latino Mormons. This research began in 2006 when I met Veronica, the wife of a Mormon President in a store-front rama, or Mormon branch. Here close to a dozen families gathered every Sunday to testify to their faith as Latter Day Saints. I had never met a Latino LDS member, and to be frank, did not even know such a community existed. Latino Protestants of all sorts (Baptists, Jehovah’s, and Seventh-day Adventists) were in my periphery, but Latino Mormons were completely out of my realm of possibility. Veronica invited me to her home where we bonded over her delicious pozole.  Veronica recalled the story of her crossing into the United States with her children, “fue una aventura terrible pero para ellos yo se les hice ver divertido – como que todo estaba bien… Gracias a Dios estamos aqui, que si pasamos por todo fue porque El lo quiso asi que valoremos mas las cosas, lo que tenemos, nuestro hogar, la familia” [It was a terrible adventure, but for them [her children] I made it seem entertaining, like everything would be ok. Thank God we are here, what we went through was all because He wanted us to value things, value what we have, our home, and our family].  It was women like Veronica who solidified my own interests in faith and religion as a coping mechanism for Latino immigrants. Veronica courageously faced the crossing with her children. Terrified herself, she referenced the crossing as “una aventura” an adventure to compartmentalize the fear and transform it into excitement for her children. Since then, I have continued to address the role of faith and family in Latino Mormons. Currently I am sifting through archives, conducting oral histories, and attending church events/services to understand more fully how specifically the Church of Latter Day Saints is inclusive of its Latino converts, and how Latinos have, for almost a century now, found their own spiritual belonging as Mormons.

The researcher in me wants to probe the Mormon Church’s problematic vision of a “light-skinned” God speaking to and saving indigenous communities in the Americas. I want to remain aware that the Church can be welcoming to some while extremely inhospitable to queer and gender non-conforming members. I want to point to the juxtaposition of families encouraged to grow and produce the next generation of Mormons while Latina females continuously get labeled as over-reproductive burdens on society.  I want to, and I will, but I also have to be true to the members who do feel satisfaction, who are tremendously strengthened by their faith, who remake an otherwise predominately Anglo Church in their own image. Members like Josefina who noted, “In December I turn 89 years old…and the Relief Society still fortifies me, it gives me strength so that if I have live more months, well it helps me. The Relief Society is always helping you and renews you.” These women are claiming their own way to belong, and draw strength from their Church and the Relief Society. They are moved by el espiritu, and I cannot deny them that. I cannot forget how much I was moved during the a holiday performance when I did feel something, when I almost heard my own abuelita sing “os pido posada…”. I can’t help remember the other women of the Spanish Tabernacle choir whose arms wrapped me in an embrace when they found out I wanted to do a book about their lives. The women who all surrounded me trying to take pictures and encourage my work. The 92 year old elderly woman whose wrinkled hands held onto my own and asked me “estas en el facebook” so she could keep up with my work. Every woman wanted to take a picture, tell me their conversion story, and encourage their daughters to talk to me. I can’t but account for their narratives as well. As a feminist, non-Mormon, Women and Gender Studies professor, I’ve faced questions and skepticism about my research from the Mormon women I am researching. I want to remain open to their voices rather than rush to condemnation. Perhaps what I am actually doing, what drives this work, is the search to connect to my amá and abuelita, to their faith and their willingness to assert their own roles as Mujeristas, or women who lived their faith fully in their every day. So this Easter Lenten season I will go to church, but much to my mother’s chagrin it will be for research and not spiritual reasons.

Sujey Vega is on the faculty at Arizona State University and a member of the Mujeres Talk Editorial Group.