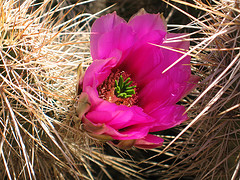 Flower among the Spines by raelb. Flickr/Creative Commons License.

Once upon a time there were no Latinas tenured in the Arizona university system, from Tucson to Tempe to Flagstaff. This lasted until 1973, when it was my good (mis?)fortune to confront the system and see how things worked.

I had prepared diligently, and then some. When I submitted my tenure file in the spring of that year, I had one monograph in print published in Spain, one coedited critical edition by Oxford University Press, eight articles in reputable journals, several conference papers delivered, very good teaching evaluations, and quite a bit of professional service. Since the year before, I had been meeting with a group of faculty women who formed a caucus to look into our status on campus at the University of Arizona; this group would go on to form the first Women’s Studies program in the state. I remember one male colleague in French stopping me in the hall to inquire: “Why Women Studies? Why not Men Studies?”  I laughed then, since I could not have known how my tenure case and the subsequent struggle would be seen first as waged by a woman, and second, by a Latina who was trying to obtain job permanence as a Latin-Americanist in the United States.

My case passed the scrutiny of a departmental committee (admittedly with some grumblings from traditional scholars, all men), and then went on to the Dean’s office for review. There my troubles began: I was called to the College of Arts and Sciences office and literally put on the carpet by the Dean, a Harvard alumnus whom (I would find out later) had been “informed” by some older colleagues at a Harvard alumni party that my work was dubious in nature and provenance. My publications were all right, but nobody knew if I had written them by myself or with help from some ghost writer, perhaps my dissertation director (!). Furthermore, my field (Latin American contemporary literature, mostly poetry) was not that important in the scheme of things.

Thus spoke the Dean: “Consider yourself lucky that we have to award you tenure, because a letter should have been sent to you a year ago indicating trouble with your CV, and it wasn’t. However, you will not be promoted to associate professor. Your title will be lecturer.”

I was speechless. I left the office, went home, got into bed, and pulled the covers over my head. How could that be?  Where was justice?  Two days later, I found out that the colleague who had asked me in the hall about the feasibility of Men Studies was promoted to associate professor with tenure, despite having fewer years in rank, not having a book in print, and having been hired in the position of lecturer as an ABD a year after me. The department head of Romance Languages explained to me that since the promoted colleague was in a less popular field—French Canadian literature—and I was in Spanish, they needed his services more than mine in Arizona (!!).

I consulted with my colleagues in the women’s studies group, received their moral support, hired a lawyer (who had just won a case of gender discrimination in the state), and filed a formal grievance with the Civil Rights Division of the Department of Education in Washington DC.  Everyone on campus was amazed:  “She called in the Feds!”  I heard whispered behind my back.  A team of investigators came to campus, and after many interviews and much examining of files and almost a whole academic year, I was given a letter with what they called the “right to sue”: yes, they had found evidence that I had been discriminated against for reasons of gender and ethnicity. It helped that a young teaching assistant (also a Harvard alumnus) told me, and later testified, that he had overheard the conversation between one of my older colleagues and the Dean in which they trashed my work, and conjectured about the authorship of my publications. That colleague was opposed to granting me tenure because according to him, Latin American literature was not a departmental priority, nor a well-respected field of research (after all, he couldn’t read more than thirty pages in García Márquez´Cien años de soledad without getting utterly bored!). At the time, out of twenty-five faculty in my department, there were only two women besides me: one was semiretired at 78 years of age, and the other was tenured but in the more acceptable field of medieval studies and linguistics. Neither was interested in women’s issues: I heard the older one say at a faculty party that she preferred to speak to men because “ladies only talk about their babies.”

It was in the spring semester of 1974 that the Dean was removed from office and another head of department was named. I received a letter from the President of the University with a new contract as associate professor with tenure, and a substantial salary increase. Both the new dean and the acting department head called me in and offered verbal apologies. But the title of lecturer for the academic year 1973-74 is still on my record, as a testimonial to that annus horribilis in which they tried unsuccessfully to hold a Latina scholar back.

Oddly enough, the only other Latina who received tenure in the Arizona system around that time was another Cuban-born woman in Flagstaff. But it would be at least five more years until the first Chicana PhD would be hired by the English department here in Tucson. She was tenured six years later, and I—already a full professor with a very substantial CV—sat on the Dean’s committee that examined her case.

It all seems incredible now, but so were the early seventies. At present, at least in my field, the tenure process for Latinas is an easier road than the one I had to travel. In 2013, there are eight tenured women scholars in my department (one Chilena, one Chicana, one Puertorriqueña, one Mejicana, one Argentina, two Brasileñas, one Española, one AngloAmericana). Three more Chicanas are untenured lecturers. We still have some way to go!

Eliana Rivero is Professor Emerita of the Spanish and Portuguese Department of The University of Arizona. During her 45 year career at the U of A, she was also affiliate faculty in Latin American Studies, Mexican American Studies, and Women’s Studies. Her current research focuses on Cuban American women writers and her recent poems and short stories appear in the online Spanish literary magazine LABRAPALABRA.

Mari Castaneda    February 25, 2013 at 9:01 AM
querida Eliana, thank you so much for sharing your story! It’s amazing how stories like these still abound though… I know several Latinas that were recently denied tenure and also questioned about the quality/authenticity of their work. Indeed, there’s still more work to do! But you were a trailblazer, and we wouldn’t be where we are today if it wasn’t for mujeres like you – gracias!!