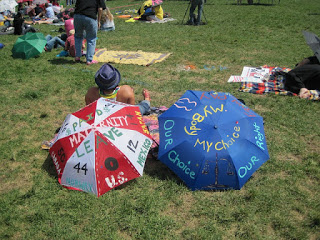 “Our lives begin to end the day we become silent about things that matter.” MLK

In watching the unfolding online celebration of the fortieth anniversary of Roe v Wade  (January 22, 2013), it is undeniable that the voices of women of color have been present and impactful in changing the landscape of abortion organizing over the past four decades. While Planned Parenthood’s decision to step away from the pro-choice framework may be the most recent indicator that the mainstream reproductive rights movement has finally understood that for most women terminating a pregnancy is anything but a “choice,” I have been struck by several articles and blogs, more than ever before written by Latinas, commenting upon what this landmark legislation currently means for our communities.[1]

It is not that this is a new occurrence—Latinas have advocated for issues of reproductive health, including pregnancy termination, for longer than Roe v. Wade has been in existence. However, it has been refreshing to read a number of public opinions and perspectives that directly engage how and why abortion is significant in Latina lives; although all authors inevitably point out that what is popularly perceived as open access to abortion in the United States is hardly the reality for most Latinas. As one “Anonymous- Reproductive Justice Advocate” notes: “The legality of Roe v. Wade does not reflect our country’s culture where sex education is often times limited to abstinence-only, access to birth control and abortions services is disproportionate, and interactions perpetuate slut-bashing where sexually-active youth are labeled as ‘too sexual.'”[2]

While the anonymity of the author may signal how much further we have to go in creating social safety for the one in three women who have abortions, especially those who are young, her insights indicate how the politics of abortion go beyond legal access to the actual medical procedure and speak to the broader cultural context and economic circumstances within which women live. As reproductive justice advocates have argued for decades, it is only within this broader framework that we can speak about the significance of Roe v. Wade for Latinas.

The importance of financial access to abortion has in fact become memorialized internationally in the life of Rosie Jimenez, who is commonly believed to be the first known death by illegal abortion after the passage of the Hyde Amendment in 1977.  Hyde cut off Medicaid funding for abortion to women on public assistance — women who by the government’s own definition cannot afford health care. Rosaura (Rosie) Jimenez, was a mother and college student living in McAllen, Texas, in the late 1970s.  The daughter of Mexican migrant farm-workers, Rosie was a single mother raising her 5-year-old daughter and also a student six months away from her teaching credential.

In her final semester of school, Rosie realized that she was once again pregnant. However, too financially strapped to pay for a safe and legal procedure at a clinic, she found a cheaper alternative. She ended up going to an illegal abortionist who used unsterilized instruments to complete her surgery. Within a week, Rosie suffered a painful death from an infection that ravaged her body. A $700 scholarship check was found in her purse when she died on October 3, 1977, at the age of 27. She could have used her college money for safe abortion care at a clinic, but she was saving it for her education.

Although it is almost thirty-five years after the death of Rosie Jimenez, the recently published commentary on Roe’s anniversary echo a reality that is still very common for Latinas in the US. In fact, more women than ever since the legalization of abortion will find themselves in the circumstances faced by Rosie Jimenez should they face an unintended pregnancy.[3] More Latinas (37 percent) are uninsured than women of any other racial or ethnic group, and more than a quarter of Latinas live in poverty.[4]  Despite the fact that they are also more likely to live in areas with poor access to family planning services, Latinas have abortions at disproportionate rates; with estimates of between 17-20% of women in the U.S. having abortions being Latina.[5] When we take into account the circumstances of newly immigrant Latinas, who have little financial and social assistance and may fear deportation, or dealing with providers who do not speak Spanish, the circumstances are even more challenging.

These numbers show that Catholic or not, Latinas do have abortions, not because they are making that “choice,” but for many, because the circumstances of their lives may offer no other choice. Moreover, current research suggests than rather than being staunchly against it, Latinos hold compassionate views about abortion.[6] But perhaps what is most notable at this particular moment is that Latinas continue to be at the forefront of reproductive health and justice organizing. From working for legal and policy change to providing health care and participating in grassroots mobilization, for over forty years these advocates have insisted that true reproductive “choice” necessitates an understanding of the many factors that impact women’s reproductive options.

While access to the termination of a pregnancy through legal abortion is critical, it is insufficient. True reproductive justice efforts must also strive to create a society in which any person has the freedom and resources to not have a child, or to have as many as they want. All people have the right to parent the children they have with full access to the social resources necessary to raise them in safe and healthy environments, without fear of violence from individuals or intervention by the government. This includes making assistive reproductive technologies available, funding education, investing in health care reform for all, ensuring food safety and security and prioritizing the unification of our families. That we guarantee all of these options for all people regardless of race, class, gender, sexuality, or physical ability, is fundamental to creating true reproductive justice.

If you would like to learn more about Latinas and abortion, reproductive justice or efforts to end the Hyde Amendment:

1. Join the Strong Families tweet: What has Roe v. Wade meant for communities of color? Jan 22nd, 9am #Roeat40 #Roeat40chat

2. Participate in a “Talking About Abortion” e-LOLA (Latinas Organizing for Leadership and Advocacy) hosted by the National Latina Institute for Reproductive Health (Jan. 22-23; offered in English and Spanish)

3.  If you can’t make the training above, you can refer to many bi-lingual fact sheets and policy analyses offered by the NLIRH at: www.latinainstitute.org/issues/abortion-access.

4. Find out about the abortion laws in your state, and the existence of an abortion fund (check out http://www.fundabortionnow.org/). These are the folks who will be able to assist someone in your area if needed and are a great resource.

5.  Find out if there is a reproductive justice organization in your state.  Volunteer, recommend, donate and keep connected to the issues.

Elena R. Gutiérrez is Associate Professor of Gender and Women’s Studies and Latin American and Latino Studies at the University of Illinois, Chicago. She is the author of Fertile Matters: The Politics of Mexican-origin Women’s Reproduction, co-author of Undivided Rights: Women of Color Organize for Reproductive Justice, and is a member of the Mujeres Talk Editorial Colectiva.

[2]  Anonymous, “A Young Latina’s Reflection on Choice,” California Latinas for Reproductive Justice http://www.californialatinas.org/a-young-latinas-reflection-on-choice)
[3] The Guttmacher Institute recently reported that during 2011 and 2012 more abortion restrictions were enacted in U.S. states than in at any other previous years. 2011 marked a record high, with 92 pieces of legislation being passed throughout the country. Guttmacher Institute, “2012 Saw Second-Highest Number of Abortion Restrictions Ever,” guttmacher.org.media/inthenews/2013/01/02/index.html. 1/2/13.
[4] Hope Gillette, “Cervical Cancer Awareness: Latinas At Greater Risk, ‘Third Most Likely Group To Die Of The Disease.” Huffington Post Online 1/14/2013.
[5] National Latina Institute for Reproductive Health. (2004) “Latinas and Abortion Access: Issue Brief,” latinainstitute.org/sites/default/files/publications/AbortionIssueBrief.pdf.

Thank you Elena for such a timely and powerful post. You remind us of the limits of liberal “rights” frameworks in erasing the barriers faced by poor women of color. People like to blame women’s “cultural” silence about sex in the family as the ultimate barrier to them seeking legal abortions, erasing the entire structure of poverty and lack of healthcare access. Another aspect of reproductive justice we need to fight against is the insidious way undocumented migrant parents are increasingly losing their children to child services and foster care. They are increasingly constructed as irresponsible parents – simply due to the fact that they do not speak English and because of the “risks” posed by being undocumented, which of course means today that they are likely to face prison time, detention, and deportation. Thank you for your post!