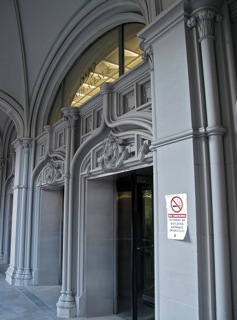 Recently, I attended John Jay College of Criminal Justice’s 1st Biennial Latina/o Literary Theory & Criticism Conference entitled, “Haciendo Caminos: Mapping the Futures of U.S. Latina/o Literatures.” The conference organizers Richard Perez and Belinda Linn Rincón did a phenomenal job of arranging provocative keynote addresses by Ramón Saldívar, José Esteban Muñoz, Mary Pat Brady, and Silvio Torres-Saillant. They also assembled two days of panels on Latina/o literatures. For a conference-goer such as myself, who always has a hard time finding the one-to perhaps-three panels that actually pertain to what she researches and/or teaches at every literature conference she attends, this event was a veritable cornucopia of literary insights. As a former co-chair conference organizer for MELUS 2010, I could especially appreciate all the hard work and dedication that it took, on the parts of Perez and Rincón and their support staff, to pull off such an endeavor.

Now to turn to the ideas presented at the conference; first, let me state a disclaimer that these summaries derive from my personal and admittedly incomplete notes as a single conference participant. Please forgive any unintentional inaccuracies. Ramón Saldívar set the tone of the conference with his key note address which examined the role of speculative realism in the future of Latina/o literatures. He offered a framework for understanding how the past and the future are more intimately connected than we may think. Saldívar asserted that for Latinas/os, our relationship to the future should be to realize the history not made. Speculative realist texts can act as a set of alternative thought experiments in order to create a new imaginary for the Latina/o community.

The next day, José Esteban Muñoz and Mary Pat Brady delivered powerful meditations linking politics and art. In their presentations, there was an uneasiness stated about hyphenated identities and other identity labels such as “Hispanic” and “Latina/o”; subsequently, Muñoz suggested returning to the label “Brown.” According to my notes, Muñoz explains that in “Brownness,” there is no ranking of “Brown” individuals or conditions; there is just the grounded experience of being “Brown” based on a shared sense of harm and yet flourishing as well. I particularly liked this idea about identity because it seemed to fit so well with feminist organizations like MALCS, where we have always stressed an non-hierarchical, heterogeneous inclusion of all women who share in the grounded experience of being from or connected to the Latina/o or Latin American community or world regions, and this experience is often rooted in a history of political and social oppression but is also marked by cultural flourishing and expression as women. Aesthetic practices and places can serve in the rehearsal of this identity, allowing Latinas/os to be who we want to be in the world. For Brady and Muñoz, this led to a consideration of recent reflections on “failure” by Halberstam and others, as well as recent discussions of “negative aesthetics in art” for understanding queer Latina/o literature and performance.

Lastly, there was the closing keynote address and conversation where Silvio Torres-Saillant posed the following questions to authors Helena María Viramontes and Ernesto Quiñonez: How does one study Latina/o literature without relying on literalization? Do critics do enough to emphasize the art of literature? How do we get students to do the artistic work? These questions caused quite a stir for the panelists and the audience. Several scholars contested the implied sentiment that current scholar-teachers are not getting their students to appreciate Latina/o literature as art. The writers, including author Angie Cruz from the audience, expressed interest in the feminist and other readings of their work by literary scholars. Sadly, I missed how the chaotic stir of discussion at this last session concluded; I had my own stirring chaos to contend with in visiting my dad and brother that last night in New York before I had to return home early the next day.

Putting the rich ideas of this conference aside for a moment, this last session emphasized the types of heated yet productive discussions that happened throughout the conference. These moments seemed to happen for two reasons: generational and gender gaps. In one roundtable conversation, a senior Latina/o literature scholar took offense with the assertion that critical studies of Latina/o literature did not flourish until the late 1980s, a perspective that overlooks earlier critical work. In another instance, following a reading of Pedro Monge’s “Lagrimas del alma” (a short play about the aftermath of the flight of Pedro Pan for one Cuban-American family), another debate occurred over what language the play should be performed in: English, Spanish, or a mix of both. Many audience members expressed the view that use of both languages seemed to be realistic and audience-friendly. However, one participant, an older gentleman, favored a seemingly purist view of language: a play by a Cuban man about Cuban history should be in Spanish. At still another panel, a scholar took issue with the frequent teaching of Junot Díaz’s The Brief Wondrous Life of Oscar Wao (2007) as a feminist text. The rich discussion on all sides of this issue among the audience included more than one participant explaining how Oscar Wao is about much more than Yunior trying to score “pussy.” It escaped these audience members’ attention that by using words such as “pussy” in their discussion, they were not doing much to advance their assertion of feminism in this text. In this way, my feminist training, which is reinforced daily through my work with MALCS, reminds me of the importance of not only what I am talking about but also of how I am talking about the subject-matter at hand. “Pussy” only invokes a colonial and patriarchal legacy of violence that reduces targeted women and their communities to be mere objects and not the true subjects that they are. “Pussy” does little to flesh out a study of feminist agency, collaboration, and societal transformation in almost any work.

The take-away from all these passionate discussions is the need to keep having these important conversations about the history of Latina/o Literary Studies, language, and gender. We need to have these arguments, to be reminded of the importance of this history and these concepts, amongst our own community members engaged in Latina/o Literary and cultural production. Asking these questions of each other in our continued work and study should be a first and foremost concern for everyone involved. We need to keep each other honest and knowledgeable about our work always and most significantly before we present our work in more general venues and conferences. In this way, the new ideas, arguments, and theories presented at conferences such as this one are not the only benefit to be had; these other meaningful discussions maintain the field in a healthy state of self-awareness. Hence, conferences devoted to any facet of Latina/o Studies are crucial, should be strongly supported, and the organizers of such events deserve to be recognized for their substantial service to the professional community.

Susan C. Méndez is an Assistant Professor in the Department of English & Theatre and the Department of Latin American & Women’s Studies at the University of Scranton. She teaches courses on Multi-Ethnic American Literature and Women’s Studies. Primarily, she conducts research on novels written by Latino/a authors. Méndez is a 2011-2013 At Large Representative of MALCS.