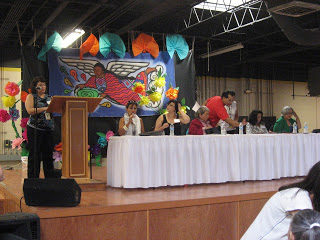 Over the last three years there have been a spate of “reunion” and “commemoration” gatherings around major moments in the Chicano movement of the late 1960s and early 1970s. This past summer I attended two such gatherings in Texas, one in Austin and one in El Paso organized by raza in each place to reflect upon the historic third party effort to organize as La Raza Unida Party. RUP was founded in Texas to increase the political representation of Chicanas and Chicanos in elected offices and to assert the political voice of the raza community. For me, attending these events was part of my continuing research on women in the Chicano movement and a chance to listen to the veteranas and veteranos about their experiences. I am fortunate to do research that reflects my passion and personal commitment to know this history and to continue to learn about it and from it.

I have to admit that I do sometimes idealize el movimiento to some extent even as my studies have provided me with a strong sense of its limitations, particular with respect to mujeres. While the movement demonstrated limitations, it still stands as a powerful example of a Chicana/o progressive political culture that was forged through grassroots and community based organizing. (Certainly to be credited for the existence of, among other things, Departments of Chicano Studies, like the one where I make my academic home).  My interviews with RUP women and studies of the archive have given me a stronger appreciation of the possibilities of working through the electoral process. Listening to the activists at these conferences was inspiring especially for someone like me who had been rather cynical about electoral politics due to my experience living through the long conservative era (Reagan, Bush, and Bush)—so much so that, while I voted in the 2008 Presidential election, I felt rather distanced from the process.

Of course, we must be specific about the political culture of Texas at the time of Raza Unida’s founding, a state where Governors had been mostly Democratic party candidates since 1874. During the 1970s, the work of RUP was not only to assert a third party option as a challenge to the two party system (famously described by Rodolfo “Corky” Gonzales as “like a monster with two heads feeding out of the same trough”), but also to send a message to the Democratic party of Texas which still reflected pretty deep traces of the race politics of the post Reconstruction-era Southern political culture of exclusion and disenfranchisement including the existence of poll taxes. Poll taxes were in place until the Black Civil Rights Movement called attention to the various forms of disenfranchisement enacted at the polls and subsequent legislation made poll taxes unconstitutional. (For a current debate on a “poll tax by any other name” see http://www.latimes.com/news/opinion/commentary/la-oe-ackerman-texas-poll-tax-20120715,0,6684651.story)  Additionally, in a city like San Antonio, the existence of “at large” elections served to reproduce practices of exclusionary representation on the city council until district based elections were instituted in 1977 (an issue that the Committee for Barrio Betterment–an early form of Raza Unida–raised when it ran candidates, including Rosie Castro and Mario Compean, in the early 1970s).

At the Austin event, there was a sense of the past in the present when it came to gender politics—as was the case in the 1960s & 1970s, it appeared to be mostly mujeres who set up the logistics and worked behind the scenes to help pull the event together. These included many who had been among the most committed RUP activists of the time running for elected office, serving as Precinct Chairs, and, even as the Chair of the Party such as Martha Cotera, Maria Elena Martinez, Lindo Del Toro and Alma Valdez. Then and now, these women can always be counted on to follow through, a sign of a true activista. While women were working the tables (many comadres of the above named women), they were also on stage: Luz Bazan Gutiérrez, the first Chair of RUP in Zavala County, served as an MC and there was at least one woman on each panel (where before there were usually none unless Chicanas called out the lack of representation). I was especially struck by the words of Maria Jiménez, who had been involved in RUP in Houston and had run for State Representative against Ben Reyes (who ran on the Democratic ticket). She reflected upon the legacy of RUP (and I paraphrase from my notes), “electoral politics is seen as reformist but the process was radical.” Her words underscored the massive grassroots character of the RUP effort in Texas, a process that required the construction of a state-wide  infrastructure to gain party recognition, not to mention voter education and identification of candidates willing to undertake the hard work of campaigning.

The Raza Unida concept, which had been circulating in the national movimiento by the late 1960s, brought hope to the movement and in short order RUP’s crystallized in California, Arizona, Colorado, and included Midwest states such as Michigan. It was this national conversation that brought activists to El Paso, Texas during Labor Day weekend in 1972 to create a national party. Forty years later in 2012 a panel at this conference entitled, “Prospects for Reviving RUP or Creating a New Partido” moderated by Armando Navarro and featuring Herman Baca, Ernesto Vigil, Maria Jiménez, José Angel Gutiérrez and Juan Jose Peña, sought to evaluate our present moment and possible next steps. I found the panel riveting as the speakers, each of whom commands a wealth of knowledge from activist work and movement history as key actors in those times, presented their thoughts in elegant, concise and powerful words. While there were some differences among the speakers, what they held in common was a call to “educate, politicize, and organize our people” (Baca) and for the “creation of critical consciousness” (Vigil). Other speakers underscored the importance of the grassroots and “social movement strategies” and cited the work of the Dreamers and the immigrant rights movement as offering recent examples of the ongoing viability of mass movements (Jiménez), the need for more use of social media such as the internet (Gutiérrez) and a communication network (Peña). While there was some optimism voiced by the panelists, it was slightly muted as the enormity of reviving a movement became quite clear–there was not a large attendance although the panel was on a Friday afternoon in a community space and, as one panelist pointed out, he was very tired and quite ready to hand the torch over.

Despite the historiographic creation of “four horseman” and the actual history of male dominance in the leadership of RUP at its higher levels, the organizers of this conference worked hard to make space for Chicana voices. A panel beautifully titled, “Raza Unida Party Legacy” by its organizer, Martha Cotera, featured an intergenerational range of women’s voices –Cotera herself, who stated that Raza Unida provides a “political framework;” Linda Garcia Merchant, a filmmaker whose work has begun to share previously unheard stories of Chicana involvement in the movement; Lydia Hernandez, a school board member in Phoenix now running for State Representative in Arizona; Maria Cotera, a university professor who is not only doing the academic work of documenting Chicana lives but involving her students in the work; Avina Gutiérrez, whose mother and father founded the party and is now involved in grassroots politics in Austin; and, Mary Gonzalez, recently elected as a State Representative for El Paso and also proudly identifying as “pansexual,” pointing to a new context in which LGBT perspectives are included in notions of Chicano electoral politics. Across these voices, it is clear that the RUP legacy continues for Chicanas, who played an equal role in building the party in Texas in the past, and are making their presence known not only in current electoral activism but also in a number of projects that carry out the legacy.

It is important to honor and to remember significant projects and events of the movimiento—perhaps more than anything else to share these projects with new generations that are facing trying times politically and economically in the US. There is a need to convey the continuity of struggles by Chicanos and by Latinos in the US that provide models, lessons, and reservoirs of hope that link into current day issues (and are in the process of being updated and revised, especially around gender and sexuality). The immigrant rights marches of 2006 recalled both Chicano movement marchas and Latin American traditions of social protest manifesting this kind of continuity while also intersecting with the changes in demographics including the pan-Latino constructs that have emerged. Ultimately what I walked away with left me with a sense that the consensus, at least among those who attended both El Paso and in Austin, lies firmly with a commitment to the grassroots—and this to me, is the strength of the Chicana/o political culture manifested in Raza Unida Party, the Chicano movement, and ideally, Chicana/o Studies. This is the emphasis that will keep us relevant beyond 2012.

Maybe we can see hope in new generations of elected officials such as the Castro brothers, Lydia Hernandez, and Mary González (all in Texas, interestingly enough) who are asserting the legacy of a Chicana/o progressive political culture. During the Austin gathering Rosie Castro arrived with her two sons, Julian and Joaquin, named as “rising stars” in the Texas and national Democratic party, a symbol, in my view, of the party’s longer term legacy (even if, ultimately, most of the electoral successes of that time were at the local rather than statewide level.)  (See historian Cynthia Orozco’s brilliant commentary on the Castro’s: http://historynewsservice.org/2012/09/no-julian-castro-without-mother-rosie-castro/). Maybe I have to put aside my cynicism about electoral politics but, as was affirmed at the events, elected officials can only be the voice of the people when there are grassroots efforts and social movements that not only support them but also assert and reflect the needs of the people.

Dionne Espinoza, Ph.D. is on the faculty of California State University, where she teaches Chicano Studies and Women’s and Gender Studies.

Dionne, thank you for this wonderful reflection on the Raza Unida commemorations and the legacy of Chicana participation and activism. I so enjoyed reading it and will most definitely share it with my students. Mil gracias for your work!