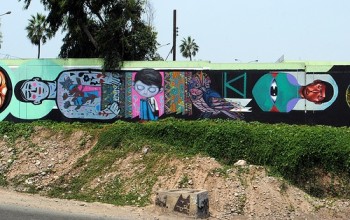 Driving down Main Street in Half Moon Bay several weeks ago, a short detour from the wealthy tourist zone into a residential apartment complex two blocks away brought me into the borderland between the middle to upper class white community and a mixed class of Latinos in this small Northern California town. We slowed the car to get a closer look at the hundreds of Latinos/as dressed in black outside a church. It was as if they were floating to the rhythmic flow of Aztec dancers, their bodies gracefully leaning back to release hundreds of white balloons into the sky, pleas for peace in a community united by rage over the recent death of an 18-year-old Latina by a white police officer. A Latino tasked with facilitating the flow of traffic walked up to us and I quickly rolled down the car window. He responded to my concerned look by explaining the events that led up to this funeral.

“The police are out of control in this country,” he said with anger rising in his voice. “They shot and killed a young Latina with mental health problems, shot her in her own home.” I found out later that the family called 911 when their daughter, Yanira Serano, would not take her medication, hoping the paramedics would arrive as they usually did. The police arrived instead. When faced with this woman running towards them with what her family say was a butter knife, a police officer shot her dead “in self defense.” The family and others wanted to know: Why didn’t the police use a Taser gun, or try to disarm this young woman? And I think to myself, this would not have happened in a white, middle class home. Is the racialized criminality of migrants so high that police are increasingly turning to guns to solve “problems” in Latino communities? The hostility of police toward migrants, like African-Americans, speaks to the disposability of certain lives, those who are criminalized, dehumanized, and stripped of the most basic protections and rights in U.S. society. At least these incidents are spawning widespread demands for rights and humanity by Latino communities. Young women and residents protested Yanira’s death, as they occupied the tourist zone where the sheriff’s office is located shouting for “Justicia!” through the bustling streets of the downtown area of Half Moon Bay.

This police shooting of a Latina is hardly an isolated event. The recent killing of a Latino migrant by police officers in Salinas and others in Anaheim similarly spawned protests, especially in cities in California where racialized tensions between Latinos and whites have a long history.[i] The Salinas murder, which happened only months before and was the third police homicide that year, ignited street protests where over a thousand people met in the streets of Salinas to demand justice, and an investigation of racially motivated police violence in the area. Unfortunately, media attention to this murder was drowned out by the shooting spree of a  Santa Barbara City college student, a wealthy young man, whose psychological profile captured attention after he tragically killed six innocent people, supposedly in response to a lack of attention from young women. It is the (racialized) innocence of the Santa Barbara victims that the media contrasts to the reporting of migrants deaths, who are criminalized as always potentially out to commit a crime. No one talks about the laws themselves that criminalize every aspect of migrant life.

Many of us are well aware of the rising deaths of migrants along the U.S.-Mexico border. Not only are migrants dying as they cross the most militarized borders, as well as deathly desert zones in Arizona, Texas, and California, but the pumping of funds into border patrol personnel and surveillance technologies are spreading this terror to cities across the United States. Secure Communities, a government sponsored program to educate and empower local police to take on the role of Immigration and Customs Enforcement (ICE), stretches how we conceptualize borders, transferring border zones from the imagined space between nations to a much more deterritorialized terrain that stretches beyond the nation and into the most intimate sphere of immigrants’ everyday life. For example, the United States contributes funding, border control strategies, and technologies to Mexico and Central American countries to slow the numbers of migrant crossings into Mexico and ultimately the United States. In exchange for negotiating a better deal for its own migrants in the United States, Mexico detains and deports Central American and other migrants crossing its Southern Border, the majority from Ecuador.[ii] In addition, drones manufactured by U.S. and Israeli companies patrol both sides of the border in the name of narcoterrorism, shifting war technologies to the U.S.-Mexico border as well as other borders around the world.[iii] We might want to think of this as another stage of global imperialism where technologies spread the power of the United State’s control over land and bodies, a form of governance I call “techno-empire.” The United States can control countries like Mexico from afar without having to literally take over another country. For example, by launching drones over Mexican territory, or selling surveillance technologies whose optics can be viewed from any Internet location, the United States keeps watch of not only migrants and drug cargo, but also the police and border patrol on the other side of the border. Given the use of militarized technologies to fight the “war on terror,” U.S. technological dominance compromises Mexico’s sovereignty to determine it’s own border policies and practices.

This militarization of the border financially supports high-tech companies as well as the prison industrial complex (as detention centers continue to expand), leading to gross profits made on policing bodies whose value relies on their de-humanization. Migrant deaths and deportations are calculated as simply the collateral damage of the war at the border. Hundreds of migrants have been killed by heat exhaustion, drones, and helicopters (especially in Texas), while surveillance cameras positioned in border patrol cars, fences, and across the border region track people like hunted animals to be detained, imprisoned, or exported from the United States. It seems as though the power to identify and police each other has spread through a state of exception that normalizes war onto racialized bodies charged with the potential to threaten, rather than enhance, American life. All are empowered – the police, hospital personnel, schools, vigilantes or “citizen border patrols,”[iv] and everyday individuals (“If you see something, say something”) – to call in (and sometimes kill) potentially undocumented individuals. In fact, Texas border patrol can legally shoot moving vehicles suspected of carrying undocumented migrants. Officers and helicopters are indeed mobilizing this right, leading to a spate of deaths, including the killing of a migrant mother who was shot through her car windshield, leaving behind her crying 18 month-year old in the front seat.

Ironically, securing the border is often justified through the protection of innocent women and children trafficked across the border, even as migrant women are demonized as irresponsible mothers due to a lack of English language skills and for breaking the law by crossing the border, among other reasons. Further aggravating the situation is the conflation of migrants with gang members, smugglers, and terrorists in the media, which has police responding to a racialized rage (and fear) that results in the death of migrants. It’s not only rage that drives these deaths, but the widespread disrespect for the rights and humanity of migrants whose very bodies have recently been found dumped in mass graves in Texas. While the law stipulates that all dead bodies must be identified in Texas, as in most states, it appears as though migrant bodies found in the border regions of Texas and other states are being dumped into mass graves without identification.[v] Similar to the lack of justice for the disappeared women in Juarez, many in Mexico and Central America search for loved ones with few resources to pay the thousands of dollars required to exhume and identify bodies discarded most efficiently in a burial site in Texas. And the rapid rise in numbers of children migrating without an adult across multiple countries en route to the United States, or left behind by a parent in detention who has been deported back to Latin America, or killed, should be evidence enough that the “war at the border” is creating many more problems than it solves. The walls erected at the border mirror the halted flow of knowledge about how migrants are being brutally stripped of humanity in the media. I am hopeful that migrants from around the world will continue to see themselves in alliance against the techno-virtual imperial state, and its militarized apparatus. And continue to rise up in defiance.

[i] A video of the Salinas killing went viral when caught on someone’s cell phone. A Latino man had entered a woman’s house in what they think was an attempted theft and rape (although nothing was taken and no one was hurt) and was caught stumbling down the street of Salinas. After the police followed him for two blocks, they shot, and killed him on the corner of a busy street in the middle of the day.

[ii] Many of these migrants come from Ecuador. See David Kyle and Christina A. Siracusa, “Seeing the State Like a Migrant” in Illicit Flows and Criminal Things: States, Borders, and the Other Side of Globalization (eds., Willem van Schendel and Itty Abraham, Bloomington: Indiana University Press, 2005), 153-176.

[iii] See Tom Barry, International Policy Report, “Drones Over the Homeland: How Politics, Money and Lack of Oversight have Sparked Drone Proliferation, and What we can do.” April 23, 2013. http://www.ciponline.org/research/html/drones-over-the-homeland.

[iv] These are citizens who take over the name Minutemen in order to patrol the border and prevent migrants from crossing, oftentimes by seriously injuring and killing those who cross their path. See the Southern Poverty Law Center article, “InvestigatingDeaths of Undocumented Immigrants on the Border,”Intelligence Report, Fall 2012, Issue Number:  147. http://www.splcenter.org/get-informed/intelligence-report/browse-all-issues/2012/fall/death-in-the-desert. Accessed June 21, 2014.