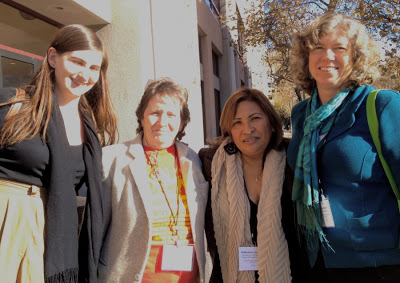 I am an anthropologist who studies the labor of Mexicana elder care providers. Every year I spend time in the field, in my long-standing research site of Santa Barbara, and I record women’s stories and experiences about work. I am always affected by the many types of violence that are inherent to the lives of Mexicanas on either side of the border. How many times have I put down my pen and held a woman’s hand, stroked her forearm, while she cries and tells me how much it hurts? Almost every interview reveals pain and anger, the ambushes to her humanity, the metaphorical blows that stack upon each other. “Me despidieron como si fuera un perro, ni siquiera en la casa, pero allí afuera de la puerta.” I asked, “Why, Reyna, I don’t understand, why did they do that?” She answered, “¿Porque no te ven, no les importas – despues de tantos años con la señora que me hicieran eso? No es justo, Maria.” She imploringly looks at me and wants me to help her put it right, to help her understand such a profound betrayal to her humanity. “Di todo por ella – sacrifique tantos momentos que le pude dar a mi hija, ¿y para que?” For what? Such a moral question in a structural economic, political and social context that does not operate by the rationality of what is good for the women who care for the aging, infirm, and dying in our society. “¿Que puedo escribir, Reyna? ¿Que quieres que sepa la gente?” I asked. Without pause she answered, “Que valoren, que sepan que este trabajo tiene valor…que uno da su vida.”

Maria Ibarra is an associate professor in the Department of Chicana and Chicano Studies at San Diego State University.  She is currently working on a book manuscript tentatively entitled “Transnational Care: Mexican Women and Aging North Americans in the 21st Century.”