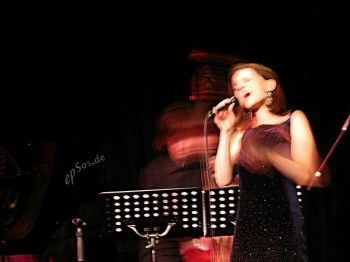 [O]ne can never assume that anything one does, and especially the moral and political position one takes, is innocent and does not need to be interrogated for complicity.   —Barbara Applebaum

I think love is an imperative. It obligates you. —Marisa de los Santos

Once, confessing to a colleague that I was going to attend a J.Lo. concert, she looked at me and without missing a beat simply said: “We all have our weaknesses. And that’s fine.” I can’t even begin to explain how grateful to her I was for saying that. Although I understand that it is practically impossible to lead a purely and unadulterated politically-sound existence, sometimes I struggle with the simple things. Like popular culture. I wish I were that person who could never be enticed by cool performers with a connection to Puerto Rico, or by overly processed and packaged images of gorgeous Latinas in the media, or by the incessant spectacle of reality television. Or scripted TV. Or B movies. Definitely B movies. I also wish I were too together to be seduced by songs with problematic lyrics and weird videos. But alas, those are only wishes, and I am not that person. The truth is that more frequently than I would care to admit, I find myself immersed in all of it, even as I dutifully try to resist its lure. I have had certain levels of success in my attempts at resistance, but at the end of the day, and to reiterate, I am not the person that I wish I were. I tend to get enthralled by all sorts of images, lyrics, and performers that taunt my politics and academic training, which is to say, I become enthralled by all sorts of things that shouldn’t appeal to me. And as a professor of ethnic studies and gender, this can lead to a distressing struggle, because I do know better. Of course, given what I do for a living, I have been able to work through some of my “weaknesses” by studying and analyzing them and by writing academic pieces about them: the ultimate means of intellectual penance we academics have at our disposal. But the fact remains, I still fall for problematic performers, shows, marketing campaigns, and songs.

In 2005, Mexican American actor Michael Peña formed a rock band that he named Nico Vega (after his mom, Nicolasa). Last year, the band did a cover of the song “Bang Bang,” originally sung by Nancy Sinatra. The song should trouble anyone with a basic understanding of gender relations and violence against women. It should also alarm anyone with a pulse, as its literal meaning walks a very fine line between being politically objectionable and being downright wrong. Just to give you an idea, here are the first 8 lines of the song: “I was five and he was six/We rode on horses made of sticks/He wore black and I wore white/He would always win the fight/ Bang bang, he shot me down/Bang bang, I hit the ground/Bang bang, that awful sound/Bang bang, my baby shot me down.” The last four lines, the ones with the bangs become the chorus for the song, so before you begin to wonder whether the song gets any better after those lines, I will earnestly and promptly answer, no it does not. Not only that, but here I am about to tell you why I find the song metaphorically compelling. See, weakness through and through.

I have been haunted by this song since I first heard Nico Vega’s lead singer Aja Volkman sing it a few months back. It was as if I could actually hear the sound of each bang as she sang it.  Almost as if I could feel each bang against my skin and my heart even though I have never been shot in my life. The song affected me, there is no other way to explain it. So in trying to answer Applebaum’s call to interrogate complicity, I asked myself why. After pondering that for a while, this is my answer.

I am a Latina lesbian. Hardly much of an answer, right?  But as I thought about it, being shot down (metaphorically, of course) by men who should have loved me and had my back is a fairly familiar feeling. Friends and family members alike. Of course, women have done their part too, especially women protecting those men, and I suppose I will eventually find a song for them as well. But for now, there is this: each bang in the song feels real because it symbolizes rejection, abandonment, and contempt. That is to say, each bang represents the violence of neglect (bang bang, he shot me down), of the spoken word (bang bang, I hit the ground), and of silence (bang bang, that awful sound). Each bang is a reminder of a person who has chosen not to acknowledge me and my life, leaving me on the ground to pick up the pieces (bang bang, my baby shot me down).

I am not trying to justify being affected by the song. I am, however, trying to exact my penance and work through why I am affected by it. I know I am taking a risk by writing this piece, for I may be seen as romanticizing a decidedly violent narrative. But I am only trying to explain (perhaps to myself) why I have developed a soft spot for a song so distastefully against my politics. I am writing this because as Isabel Allende tells us, writing is a “journey into memory and the soul.” And also, because as Audre Lorde warned, “only one thing is more frightening than speaking your truth, and that is not speaking.”  I am writing this because I loved those men, friends and family, who have, for all intents and purposes, disowned me. I still love them, and to paraphrase Marisa de los Santos, as an imperative, love obligates me. It obligates me to think and to write. But it also obligates me to maintain my integrity and remain true to my compass, even if as Applebaum suggests, my compass may be complicit in my weakness for popular culture. I will finish this short writing by sharing the song’s last two verses, the least violent ones, yet, the ones that hurt the most: “He didn’t even say goodbye. He didn’t take the time to lie.” And suddenly, my weakness for popular culture doesn’t seem so daunting, because as problematic as it may be, it can also help me articulate my pain.

Carmen R. Lugo-Lugo is an Associate Professor in the Department of Critical Culture, Gender, and Race Studies at Washington State University. She engages in research involving Latinos in the US, “the War on Terror,” US/Puerto Rico relations, and popular culture. She is a co-editor of A New Kind of Containment: “The War on Terror,” Race, and Sexuality, and a co-author of Containing (Un)American Bodies: Race, Sexuality and Post 9/11 Constructions of Citizenship, both published by Rodopi Press in 2009 and 2010 respectively. With C. Richard King and Mary K. Bloodsworth-Lugo, she  is co-author of Animating Difference: Race, Gender, and Sexuality in Contemporary Films for Children, published in 2010 by Rowman and Littlefield.