August 13, 2012 By LeighAnna Hidalgo During my undergraduate years at Arizona State University I worked on a diverse range of research projects for the South Phoenix Collaborative, studying current and historic risk factors such as migrant status, poor quality of neighborhood amenities, lack of access to affordable healthcare and healthy food, and erratic income. My commitment to South Mountain families led me to become a politically active researcher in solidarity with the segments of the community most affected by anti-immigrant legislation. I became painfully aware of the differential socio-spatial distribution of banks and predatory lenders in Phoenix area urban spaces. Under the tutelage of Dr. Seline Szkupinski Quiroga, I undertook a historical and spatial analysis on the access to credit and finance in South Phoenix for an undergraduate seminar class. This work demonstrated how space in the city is constructed and functions to produce economic and social inequality. After graduating from ASU, I entered the Applied Anthropology Masters of Arts program at California State University Long Beach (CSULB). While there, I expanded on my undergraduate thesis research on fringe financial services and followed my principle of democratizing anthropology by designing a multimedia interactive fotonovela using maps generated from GIS, archival and contemporary photographs, and video taped interviews in order to make my research knowledge accessible to the public and provoke dialogue on salient economic and immigration issues. My fotonovela comes from the tradition of rasquachismo,relying on resourcefulness to learn ‘just enough, but not too much’ GIS & Final Cut Pro and repurposing and reinventing western technologies like YouTube and Calameo from their original intent or function into a creative improvisation. My next goal is to recreate this fotonovela in Spanish and make it available for illiterate Spanish speaking populations. Currently I am experimenting with a printed version of the fotonovela with embedded videos procurable for those with smart phones. This fotonovela has been requested by ASU’s Morrison Institute for Public Policy, it has been presented in undergraduate level courses at ASU and CSULB, and in the future I hope to share it with the civil rights and advocacy organization Arizona Hispanic Community Forum. [calameo code=000553314fbaac851f9af width=420 height=272] LeighAnna Hidalgo is a first year Ph.D. student at UCLA Cesar E. Chavez Department of Chicana/o Studies. This is her fourth year as a MALCSista. Comment(s): 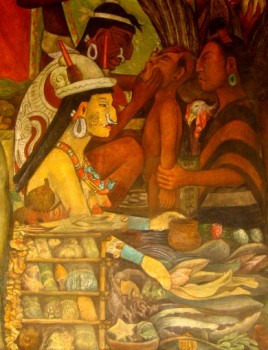