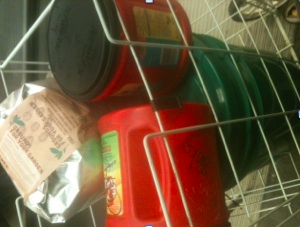 On one of those rare sunny mornings in Portland, my roommate and I take advantage of the sun, sitting out on the deck and talking about the food we can grow. Growing locally requires a lot of work, preparing the soil, finding the seeds, gauging what seeds and what resources to use because of what it means for our food and the insects that help produce it. The food she and I eat varies and as we replant vegetables and cuttings that can regrow we review where our scraps go and what we can do. At my local food pantry, we have a similar conversation, but we focus on the foods they, Latina immigrant women, bring from their homes, the ways they try to grow it and how to feed the poor. We’re all making ends meet, but making ends meet is also about eating and breathing better. Where we get our seeds and where we get the nutrients we need to grow them is critical in that conversation. At both the Hispanic community’s fundraisers and at home, we’ve established compost systems to improve how we feed our food and how we express gratitude for what the earth provides. It’s about reflecting on what we do with excess, whether that be the plant stuff that can be replanted to produce more food, or the food scraps that we allow to decompose in our yards to revive the soil. I learned about these issues in my grandmother’s kitchen, in the kitchen of many working class women and women of color who had to answer this question: how do we feed ourselves with minimal resources and who can/will share their abundance so that we could make our own?

Living and working in a city like Portland, that collects compost more frequently than trash, I thought composting would open up the conversation about how we each gardened or could begin to garden at home. I began composting at work, initially because I wanted a guaranteed source of used coffee grounds. Coffee grounds are useful for a number of reasons, but I wanted to see what it would take to compost in a work place not otherwise expected to compost. Below, I explain the steps I took and what I used to establish a relatively effective compost system at work.

First, I started by asking the manager if I could set up a small compost station in our break room. On getting permission, I reviewed the places in the break room I could place the canister. While I place my compost bin in the garage which lies off the kitchen, there was minimal room under the sink in the office’s break room.  Given where the coffee was located and what minimal shelf space there was, I placed the canister in the corner behind the coffee pot as that corner was also next to the recycling area.  Putting the canister near the recycling kept all ‘green’ trash in the same place; placing it near the coffee pot would assure minimal mess in transferring used coffee grounds from the pot to the canister.

Once I had a system, I sent a mass email to coworkers. In the email, I explained that the office allowed me to start composting to minimize trash and I answered the following questions: what was the philosophy behind composting? why was it beneficial for our office community? The exercise, for me, was not just about getting free materials for my garden’s compost; it was also about learning how to talk about socially relevant issues in a way that was accessible. In the email, I also explained I would take full responsibility for it. I chose to take full responsibility because I was controlling where the compost was going and, in the first year, I privileged just being able to collect whatever food scraps, used coffee grounds and used napkins I could. Politically, I knew I was asking a lot from my coworkers given each individual’s personal boundaries with ‘dirt,’ mess, and the possibilities of a lingering smell. In asking them to consider adding another practice to their disposal of waste, I wanted to minimize their role in an effort to focus on beginning a cultural shift around what needed disposal and what could be recycled.

The shift required more than an email. A supervisor suggested I post a sign above the trash can as well as next to the compost container/recycling station so to encourage as well as remind other coworkers that we had a compost station. Within a few months, the old coffee canisters I used to collect materials were getting filled every other day. Signage and conversations with coworkers improved and increased participation. Even though we had multiple canisters filling up, it was difficult to navigate given the increased participation. With growing participation, there grew a need to invest in or find larger containers.

As composting was becoming commonplace at work, I had to ask myself what culture of composting I wanted to promote. I was reluctant to buy anything because, from what I had learned, central to the composting philosophy was making trash into treasure. In other words, redefining the possibilities of what could be re-used. While I was still perusing Craigslist and Freecycle for a container a coworker volunteered to buy me one. I appreciated the gesture, as it indirectly distributed the responsibility of composting but, funny enough, as I was walking to the bus the following day with the new one in my hand, I found a three-foot stack of empty five-gallon buckets down the street. I took three buckets and three lids. More buckets lent themselves to easier transport and transfer. Since then, I switch the buckets every few weeks. As we collected more compost, I made a point to integrate used paper towels and brown paper bags to absorb whatever smell would have been produced. The carbon contribution paper provided also contributed to balancing the carbon-nitrogen ratio. While the buckets secured shut, I was wary of what opening them would inspire in well-intended volunteer composters.

Remember, composting is a volunteer effort. We each have our learning curves as well as diverse understandings of what can decompose at the rate we want, based on how we intend to use the compost. If you notice more meat and cheese and oil than your home system can tolerate, send coworkers a reminder email of what the compost’s boundaries are. Be considerate of workplace boundaries and maintain a break room’s culture as a space of comfort/leisure. As can be expected, compost can be messy. We all expect clean break spaces in our office and it was important that I respect that considering I was asking a lot of people by introducing a new practice. The transition to greater support required I pay closer attention to the mess created. I wiped down the bin as well as the surrounding area whenever I saw it getting messy. I equally had to address the initial use of old coffee ground containers so as to minimize the clutter the collection was producing. In other words, as much as the environmental ethos that drove composting was about improving the quality of life, it was important that I equally support a clean and tidy break room. I did my best to keep the station clean, recognizing that the transition could be difficult to accept if the change did not accommodate the initial norm of a compost free workspace. The daily attention cleaning requires is well worth it not only because of what the scraps will contribute to a garden over time.

Food scraps take months to a year to decompose; growing food with minimal additives in an environment full of birds, slugs and insects does not guarantee a strong yield. For that reason, as much as I would have liked to, I did not commit to bartering for coworkers’  contributions with food. In an effort to continue building community and finding ways to share what I was growing, I found other ways of saying thank you. I would set out extra greens like kale, mustard, arugula for others to take. I also shared tomato surpluses as they come into my possession. At other times, I would make salsa with the ingredients I grew, buy a bag of chips and leave it in the break room for others to enjoy. Coworker smoothies benefited from the additional greens.

The culture of sharing wasn’t new to the office. Given our economic position, we made the most of what we had and shared when we could. Being able to share good food that was good for us, complemented the community empowerment I had born witness to in the networks of urban gardening in which I had learned so much. In the three years I have been growing food with friends in their yards, with organizations converting lawns and unused lots into food gardens, I learned how accessible each step of the growing food process could be. I did read a little, but friends and co-volunteers were my best teachers, closely followed by what I learned by practice and imitation. As much as composting at work is about decreasing waste, contributing to food’s food, for me, it continues to be about finding a more intimate relationship with understanding what we eat and sharing the fruits of that close relationship with others. While expanding the possibilities of surplus food requires changing a lot of habits, the community built and sustained through the process has been well worth it.

“Materials for Composting: What to Compost.” Composting for the Home Owner. University of Illinois Extension. n.d. Web. 4 April 2014

“What to Compost.”  Composting in the Home Garden. University of Illinois Extension. n.d. Web. 4 April  2014

Erika Gisela Abad, PhD, is grateful for the coworkers who compost at work with her and who helped her review this essay. Her essays and poetry have been published in Diálogo, Mujeres de Maiz, and The Feminist Wire. She learned to garden with the Urban Farm Collective as well as with friends she made while living in North Portland. Since finishing graduate school, she has been supporting the Latino community of her North Portland open and affirming Catholic parish, running between the kitchen and the food pantry, going to where she is needed. She can be found on twitter @lionwanderer531.