On May 2nd, indigenous communities, scholars, and activists were invited to the California Institute of Integral Studies (CIIS) in San Francisco to build understanding around culturally competent integration of indigenous knowledge in the academy. A student-initiated event aimed to raise awareness and attention to the value of culturally competent curriculum and programming at CIIS and other universities. The Indigenous Knowledge Gathering was an experience that inspired dialogue, tough questions, and movement to honor the history and sources of indigenous knowledge. Huge awe for our volunteer team who showed up at 8 a.m. and stepped into action to welcome and invite everyone into CIIS. The day was organized to facilitate dialogue and to build community with all types of knowledge keepers. No papers were presented, but each of the presenters were asked to share their testimonies, which in return help ground our self-reflection as a group and dialogue.

Wicahpiluta Candelaria, Carla Munoz, and Desiree Munoz welcomed all of us into Ohlone territories with songs of mourning and joy to start the day. Monique guided and weaved together the stories shared by Ohlone participants Corrina Gould, Nicholas Alexander Gomez, and Jonathan Cordero of their connections to the land and the transformative possibilities of bringing Native people to the table for equitable say and involvement involving the land, indigenous knowledge, and traditions. Laura Cedillo fired up the dialogue by challenging us all to think about the benefits of indigenous knowledge cultivated in the academy?

To slow down and encourage the dialogue to linger among participants, Corrina Gould blessed the mid-day meal that was prepared by Seven Native American Generations Youth Organization, or SNAG. We were honored to be the first to see the unveiling of the SNAG mural, which will travel with Bay Area urban native youth to Hawaii for the cultural exchange with Native Hawaiian Youth from Halau Ku Mana Charter School in Oahu. Huge thanks to Sylvie Karina and Ras K’Dee for sharing the native foods and allowing us to experience the art of the hawks wings wide open carrying all of our traditions.

Jack Gray and Dakota Alcantara-Camacho ushered in the connections starting to form with a powerful dance, O Hanau Ka Maunakea, inviting all of us to swiftly come together in circles of 10 and to share a story of who we are. There are no words to describe how ancestors, sounds, movement, testimony came through the space. We as a gathering started to really to get know one another and our collective intentions. This sharing became the basis for each group’s creation of actions they hope to see move forward. [Living Report and Dissemination To Be Shared Soon!]

Roxanne Dunbar-Ortiz’s presentation on “Positioning Indigenous Knowledge in Higher Education” was a moment of poetic justice because it brought into an academic space an indigenous people’s history that validates our stories, traumas, and hopes for all of our peoples. Roxanne also helped contextualize the powerful action of the gathering within CIIS, an academic institution, as a radical moment that she hopes ripples into other institutions.

To bring the dialogue to a pause so it could sit within each of us as we head home, Rulan Tangen and Jack Gray gathered everyone on the ground for our intentions to be heard and to begin to take shape. What followed was transformation, activation, provocation, identification, communication, decolonization, indigenize-nation. The Indigenous Knowledge Gathering committee passed out medicinal tea by Cultura sin Fronteras and white sage seeds were gifted as thanks.

But we were not done… we had to celebrate! After amazing collective clean-up/break-down effort, we were greeted by jams of Ras in the First Floor. Kris Hoag aka “Kwaz” who came in all the way from Bishop Paiute Tribe, gifted us some of his beats from his heart. Then there was dancing and Chhoti Ma dropped in to share more hip hop medicine, then more dancing.  Visiting San Francisco State students and members of Student Kouncil of Inter Tribal Nations or SKINS, Carlos Peterson-Gomez, and Nancy Andrade were inspired to drop some more beats that invited more dancing.

To close it up 14 hours later, we circled up and Antonio from the community shared songs from the Peace and Dignity Run. Pomo Joe and Ras offered Pomo songs of goodness and wellness and a few more hugs of gratitude for all that was given and received were exchanged before we dispersed under the Full Moon light.

Gathering and work will continue…  Please stay posted via our Facebook page Indigenous Knowledge Gathering and our website: www.indigenousknowledgegathering.com.

Angela “Mictlanxochitl” Anderson Guerrero was a lead organizer for the event described in this post. She is a Doctoral Candidate in East West Psychology at the California Institute of Integral Studies whose dissertation is titled “Testimonio and Knowledge Production Among Transterritorial Mexican and Mexican American Indigenous Spiritual Practitioners: A Decolonial, Participatory, and Grassroots Postmodernist Inquiry.” She is a Council Member of Circulo Danza de la Luna Huitzlimetzli in Austin, Texas, and is finishing her nine year commitment with the Circulo Danza de la Luna Xochitlmetzli in Mexico. Previous positions include Center for Metropolitan Chicago Initiatives, Institute for Latino Studies at the University of Notre Dame; Integral Teaching Fellow at CIIS: Emerging Arts Professional Fellow in San Francisco/Bay Area. She received an M.A. in Public Policy and a Certificate in Health Administration and Policy from the University of Chicago’s Graduate School of Public Policy in 2004. 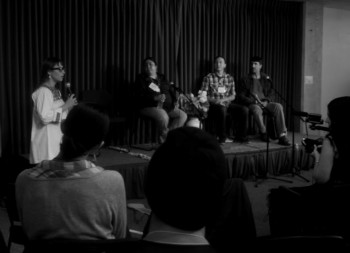 Medicine in Knowledge by Susy Zepeda

Attending the First Annual Indigenous Knowledge Gathering at CIIS was exactly what my spirit needed as I work to find my ground and honor past, present, and future ancestors on my path. I was pleasantly surprised to find a critical yet warm space where the knowledge honored and spoken came from the heart of Indigenous peoples.  Participants were invited to be fully-embodied in non-hierarchal space, through eating amazing earth-centered food, building community with each other through sharing story, and listening in an accountable way.

The deep lessons of how to exist and live in a respectful way on Ohlone land and collaborate with Native and Indigenous local communities were insightful and instructive.  Corrina Gould, Nicholas Alexander Gomez, and Jonathan Cordero offered interruptions to the usual “othering” that tends to happen in western-centered scholarly work with Indigenous peoples—instead their assertions spoke to the urgency of taking up this work in ways that are accountable to ancestral knowledges, the earth, and all interconnected beings, as well as facilitative of the complexity of  being present as a vessel for transformation. As a queer Xicana Indígena scholar-activist, critical thinker, and practitioner of curanderismo, this gathering was medicine for my whole being.

The collective space created by Jack Gray, Dakota Alcantara-Camacho, and others who offered words, ceremony, movement, and song opened a path for participants to show up for ourselves and each other through small talking circles that facilitated instant heart connections and desire to learn more about each other’s histories and struggle. Roxanne Dubar-Ortiz’s sharing from her 2014 text, An Indigenous People’s History of the United States, offered both wisdom and knowledge about the unseen genocidal and “transcommunal”[1] histories, highlighting the importance of world-wide decolonizing efforts that must also address oppressive dominant social and state structures. The closing movement and creativity brought the gathering full circle. We  all left full of wonderful energy and language to continue the important work of decolonization, solidarity, and loving our whole complex selves.

Susy Zepeda,is an Assistant Professor in the Department of Chicana and Chicano Studies at UC Davis.  She is affiliated faculty with the Mellon funded Social Justice Initiative and the UC Davis Race Project. Zepeda is part of a writing collaborative, the Santa Cruz Feminist of Color Collective and a member of the Mujeres Talk Editorial Board.  She is currently working on her first book manuscript. 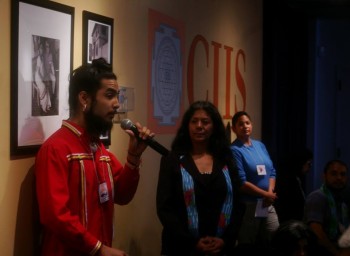 The First Annual Indigenous Knowledge Gathering at the California Institute of Integral Studies was a landmark in attempts to reposition indigenous knowledge in higher education. As Roxanne Dunbar-Ortiz stated in her talk, the history of the United States has conventionally elided indigenous perspectives and perpetuated systems of colonization and genocide. Even the “integral” philosophy on which CIIS is founded is one of bridging “Eastern” and “Western” thought with no regard for the intellectual traditions of indigenous Americans. As a researcher and teacher of Native American and Indigenous Studies, the gathering invigorated and inspired me. I look forward to attending this event for years to come, and I urge readers to do the same or, better yet, gather indigenous intellectuals at a campus near you!

The opening panel featuring three Ohlone scholars was particularly instructive. Corrina Gould gave an overview of the Indian Relocation Act of 1956 and the Termination Era of U.S. Indian policy that encouraged thousands of Native people to move from reservations to urban centers like San Francisco. In Corrina’s words, “Indians from elsewhere . . . were unaware of the existence of California Indians.” Subsequently, Indians from all over worked together to create organizations in the Bay Area such as the United Indian Nations, the American Indian Child Resource Center, and Indian People Organizing for Change. The latter organization has been especially instrumental in raising awareness about issues affecting Bay Area indigenous peoples, such as the destruction of shellmounds and other sacred sites by corporate and governmental construction projects. Since the Ohlone people are not recognized by the federal government, they are working to regain stewardship of their Native homelands by creating a cultural easement, a Native women-led urban land trust. IPOC is seeking volunteers to write grants, develop a website, and provide maintenance and upkeep services once the land is granted. Please visit ipocshellmoundwalk.homestead.com for more information or to donate funds.

The second session was led by Maori Contemporary Dance artist Jack Gray from Aotearoa. During the lunch break, Jack, who is a friend of mine, asked me to sing a song to help open the next session. This was not part of the program, and I was hesitant due to performance anxiety, but I understood that improvisation—a flexibility around the spirit of what is happening—is part of the indigenous intellectual tradition that Jack was offering. To rouse and ready the audience to receive the gifts of the gathering, Dåkot-ta Alcantara Camacho, a Chamorro Contemporary Hip-Hop Theater artist, chanted a welcoming song that honors a great navigator for the knowledge/spirit it takes to travel the seas. I then sang “The Trail of Tears Song” in Tsalagi (Cherokee), Eastern Band dialect, to thank Creator for life and the food, material and spiritual, that nourishes it. Several participants from the Transformance Lab that Jack and Dåkot-ta had co-facilitated the previous week at California State, East Bay, then led the audience in chanting and movement, helping us harness the power of gathering, sharing, and performing to awaken the latent energy and transformative potential that exist in all of us.

[1] John Brown Childs, Transcommunality: From the Politics of Conversion to the Ethics of Respect (Philadelphia: Temple University Press, 2003).