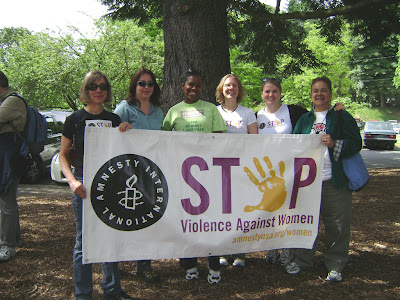 This past academic year, I have served as the Women Studies liaison to the Women’s Center on my university campus. In this capacity, I had the privilege of working with work-study students on a variety of issues, one of which being gender-based violence. The culmination of programming and events on this issue was our “Take Back the Night” rally in April. To prep for this event, the work-study students and I read “Domestic Violence Policy in the United States: Contemporary Issues” by Susan L. Miller and LeeAnn Iovanni, which brought our attention to the timely issue of the congressional debates surrounding the reauthorization of the “Violence Against Women Act” (VAWA).

The “Violence Against Women Act” was a federal law passed in 1994. It was groundbreaking at the time because it was national-scope recognition of the problem of gender-based violence; it acted as an agent of social change and had the large budget of $795 million dollars a year. It targeted underserved and rural populations and ultimately saved on future victimization costs over the years. It was renewed in 2000 and 2005 and consistently had congressional bipartisan support at all these times. Back in November 2011, the Act was up for reauthorization and this process started with a bipartisan bill written by Senators Michael D. Crapo, Republican of Idaho, and Patrick J. Leahy, Democrat of Vermont. The bill attracted fifty-eight sponsors including Republican Senators from Maine, Illinois, and Massachusetts. Although the new version of this Act passed the Senate on April 26, by a vote of 68 to 31, the House Republicans are not pleased with the Act as is and are drafting their own version that will be submitted for a vote at the House of Representatives level during this month.

So just what has made House Republicans so upset? The new version of the VAWA is ground-breaking yet again for it expands efforts to reach Native American lands and rural areas, increases the availability of free legal assistance to victims of domestic violence, expands the definition of domestic violence to include stalking, allows more battered “illegal” immigrants to claim temporary visas, and includes same-sex couples in programs for domestic violence. These very points that would rejuvenate the VAWA in its efforts to target underserved populations, one of its original goals, are the ones most objectionable. House Republicans believe the new VAWA unfairly expands immigration avenues by allowing “illegal” immigration survivors to claim battery, dilutes focus on domestic violence by expanding protections to new groups like same-sex couples, and fails to place safeguards to ensure domestic violence grants are well-spent. Senator Charles E. Grassley of Iowa phrased Republican opposition to this new version of the “Violence Against Women Act” best when he stated that this legislation “creates so many programs for underserved populations that it risks losing the focus on helping victims, period.” Other critics of the Senate-passed version of the VAWA explain that their reservations lie in the fact that the VAWA takes away from the state and local levels’ abilities and resources to address domestic violence; such efforts should not rest solely with Washington as this would go beyond constitutional limits. Lastly, a fear of fraud and abuse of the U.S. Immigration system is another specific reason for some to object to the Senate-passed version of the VAWA.

Needless to say, Democratic Senators and Representatives have come to defend the Senate version of VAWA and oppose the House-revised version of the VAWA, which strips away protections given to Native American women, the gay and lesbian community, and “illegal” immigrants who are battered. Senator Dianne Feinstein, Democrat of California, and Representative John Conyers, Democrat of Michigan, are just two Democrat congressional members who have labeled the House-revision of the VAWA as the latest evolution of the Republican War on Women, where rights and services provided to women are systemically being cut-back. Moreover, those active in the Native American community are taking issue with the House-revised version of the VAWA. According to Karla E. General and Robert T. Coulter’s “Violence Against Women Act: Overdue Justice for Native Women” in Indian Country Today, “Tribal Authority to prosecute non-Indians for crimes against tribal citizens was removed by the Supreme Court in 1978, creating an Indian country landscape where non-Indians violate Native women with impunity…. Because 77 percent of residents of Indian lands are non-Indian, and because 88 percent of these offenders are non-Indian, the long-standing jurisdictional loophole creates a human rights crisis where some of the most heinous crimes go unpunished solely because the victim is Native and was assaulted on an Indian reservation.” There is a desperate need to close this legal loophole on Native lands so as to ensure that those guilty of domestic violence are punished. Relying on federal and state law enforcement agencies in the past to prosecute these crimes has not worked well; General and Coulter assert that federal and state authorities have failed to properly address 67 percent of sexual abuse and related matters that are referred to them from Indian country.

Notably, the revision of the Senate-passed “Violence Against Women Act” does not honor its original goals: to be national in scope and to serve underrepresented populations who experience domestic violence. It appears to regard domestic violence as a crime that only happens to heterosexual, “legal” white women. Notions of wanting to handle the problem of domestic violence in a “clean” Act does not leave room for dealing with the “messy” intersectional aspects of life such as race, class, gender, legal status, and sexual orientation.

Thus, the ultimate fate of the “Violence Against Women Act” should be on the minds of all of us who deal with and care about the rights of women, especially women of color.

Susan Mendez is on the faculty at University of Scranton.

Thanks Susan for this update on where VAWA stands. You’ll be happy to know that the week of your post there were 311 visits to the page so many were interested in reading more about this!