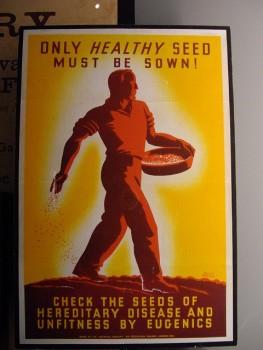 Many have been writing in recent days about when Donald Trump started sounding like a fascist. Business Insider Australia even dug up a quote from Ivana Trump in an old Vanity Fair article that claimed that Donald kept Hitler’s speeches by his bed, a statement he didn’t deny. Political science scholar Matthew McWilliams found that the single most important characteristic that predicted Trump support was authoritarianism. Yet an influential Vox article by Dylan Matthews back in December denied that Trump’s politics were on the fascist spectrum, and seemed to halt the momentum of those who had begun raising the question after Trump argued for banning Muslims at the border (initially including U.S. citizens). But Matthews’ doubtful claims that Trump doesn’t advocate violence or overthrowing the Constitution, and his apparent ignorance of the fact that Hitler was elected notwithstanding, the answer for some of us was: we heard Trump as a fascist from the day he announced. He couched his anti-Mexican racism in eugenic terms that day, back in June. He (in)famously began his speech by saying:

Much has been said about this except the most obvious: it implies that most Mexican immigrants are men and that most of those men are rapists. Where does this notion of the “Mexican rapist” come from? Especially since it’s profoundly wrong. Rape is an overwhelmingly male crime, but he offers no proof for the outrageous claim that Mexican men are rapists and overlooks the fact that the majority of migrants from Mexico to the United States are women. Or at least have been since the 1990s. While some say that gender balance has shifted since 2008 (when net migration began to approach zero, with as many Mexicans leaving as arriving), if you add women together with children, men are still a minority of Mexican migrants.

Trump is, no doubt, aware that there are Mexican migrant women in the US—after all, they do a disproportionate amount of the cleaning in the resorts and office buildings that Trump has built his fortune on (and he recently even threw out a woman from one of his rallies, asking “Are you from Mexico?”).

But demographic accuracy wasn’t really what he was after. Trump strummed an old string in US American politics by seeming to defend a violated, victimized (white) womanhood from a racialized other, recalling the old lynching narrative (also resuscitated recently by Maine Governor LePage, complaining about “drug dealers” who go to his state and impregnate “white women”). But by changing the demon of the story from an African-American to a (foreign) Mexican rapist, he shifted it in a direction that would be familiar to fascists everywhere—a eugenic one. It was about the need to protect an imagined (white) volk and their homeland not just from foreigners, but from the wrong kind of reproduction. White women being impregnated by Mexicans. As Mary Romero and others who have been tracking groups like Mothers Against Illegal Aliens have noticed, this image of the Mexican rapist might be a new note in national politics, but it is deeply familiar one from extremist, white nativist groups in Arizona and elsewhere. As he talked about the need to shore up borders, build walls, and “make America great again,” Trump was also invoking the foreign threat to white womanhood, white reproduction, and white children in a way that many of us recognized from the frontiers of eugenic racism in places like Arizona. The Washington Post and Senators may only know about David Duke and the KKK, but Latina feminism has been tracking an account of white reproduction and the Mexican threat.

This wasn’t immediately obvious in the national conversation, though, because virtually everyone who responded to Trump last June was willing to agree with him that Mexican migrants are (all) men. The American Immigration Council (AIC) quickly released a report that responded to Trump in detail, finding that only 1.6 percent of immigrant males 18 to 39 years old were incarcerated, compared to 3.3 percent of native-born males. It added, “The 2010 Census data reveals that incarceration rates among the young, less-educated Mexican, Salvadoran, and Guatemalan men who make up the bulk of the unauthorized population are significantly lower than the incarceration rate among native-born young men without a high-school diploma. In 2010, less-educated native-born men age 18-39 had an incarceration rate of 10.7 percent—more than triple the 2.8 percent rate among foreign-born Mexican men, and five times greater than the 1.7 percent rate among foreign-born Salvadoran and Guatemalan men.” The AIC data, in turn, were duly broadcast by the media, including the Washington Post fact checker (which gave Trump “four Pinocchios” for lying.) These figures reveal the falsity of Trump’s statements, but they also point to the problem of criminalization and incarceration of young people that the Black Lives Matter movement has again brought to the fore in our national consciousness.

While Trump merely implied that Mexican immigrants were all men, the AIC report was explicit. It looked at male crime data, and the Post and other media outlets accepted this without comment. All agreed to take it for granted that all Mexican (or Central American) immigrants are men.

While there is a white supremacist wing of the Republican Party that has been demonizing Mexicans for a long time—think of Pat Buchanan’s 2000 presidential run on an anti-Mexican platform—the “Mexican rapist” was from a white nativist playbook, to the right of Buchanan’s. Trump’s Hitler-isms remade the Jewish racial-religious threat to the homeland into two, the Mexican racial threat and the Muslim religious threat. 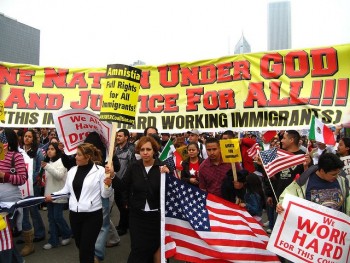 The significance of Trump’s invocation of white nativist eugenics was invisible last summer because feminism is only occasionally important to the national political debate. When he calls women “dogs” or “cows,” or complains about Megan “blood coming out of her whatever” Kelly, commentators can get a whiff of his misogyny. But the unspoken “white women” at the back of his “Mexican rapists” comment (or the complete invisibility of Mexican and Central American women to anybody) aren’t seen or heard by the media. But not only Latina feminists, but feminist scholars of Hitler, Franco, and some Latin American conservatisms have noted the importance of this foreign/national reproduction story to fascism consistently. Scholars like Leila Rupp, Gisela Bok, and Mary Nash have written about the political significance of Aryan or Spanish women having many babies, the banning of contraception and abortion, and the centrality of eugenics as a reproductive politics to fascist visions of the future and its population. (It’s telling in this regard that Trump is alone among the current leaders in the Republican field in carving out a rape exception for banning abortion.) Trump’s specifically reproductive racism, an account of the relationship of gender and race that tells a story of the appropriate white female reproduction of the nation, is a way of thinking that resonates deeply with feminist accounts of fascism and womanhood. But this hasn’t emerged in the national discussion about Trump’s candidacy because most begin from the same assumption he did: Mexicans are men.

We might say that Trump, who’s never been accused of the usual “dog whistle” subterfuges of national Republican candidates when it comes to his racist pronouncements, blew a dog whistle of his own about what we might call the race-and-gender politics of the “Mexican rapist” comment. While it’s difficult to get a handle on Trump’s politics because of a pervasive sense that he doesn’t believe what he’s saying—after all, when did Trump care about immigration or criminalizing abortion before he was running for President—it doesn’t matter whether his positions represent his deeply held beliefs or not. He is running on becoming popular—populist—with deep political cunning. He is deliberately building a new strain of American fascism in a way we haven’t seen since the 1930s and Huey Long and Father Coughlin and their Jewish threat.

While many have argued that Trump is allowing a full-throated and proud white racism to crawl out from under the rock where it has been relegated (allowing only a more genteel, less explicit racism on the national stage), I would go further and say he is building it. The 20% of South Carolina Trump supporters who have told pollsters that it was a mistake to end slavery, the Nevada supporters who rattled off a fantasy of the mass-murder of Muslims to Nation reporter Sasha Abramsky—these, I suspect, are new developments. These are flames fanned by things like Trump’s repetition of the old imperialist canard of Pershing in the Philippines at the turn of the century dipping bullets in pigs’ blood and shooting Muslim insurgents there.

The Republican Party is now in full freak-out mode that it is on the verge of selecting a nominee who plays games about whether he will denounce David Duke and the Ku Klux Klan—denouncing him one day, claiming he doesn’t know who he is the next. While the G.O.P. has certainly been racist in recent years—think of its obstructionism toward Obama, the “birther” craziness, the recent attempt to cast a shadow of illegitimacy over his nomination of a replacement for Supreme Court Justice Antonin Scalia, the denunciation of Syrian and Mexican immigrants—the party has always maintained a thin veneer of deniability that allows a handful of people of color and a lot of white folks to maintain their party membership without shame. It seems genuinely to be news that Trump’s position is unapologetically racist, and arguably fascist.

It’s just possible that if they had listened to his announcement speech with feminist ears—had heard the “Mexican rapist” canard as the eugenic claim it was—Trump’s fascism would have been obvious a long time ago.

Laura J. Briggs is Professor and Chair of Women, Gender, Sexuality Studies at UMass Amherst. A widely recognized historian of reproductive politics, Briggs has published three books: Somebody’s Children: The Politics of Transracial and Transnational Adoption, (Duke University Press, 2012); Reproducing Empire: Race, Sex, Science and U.S. Imperialism in Puerto Rico (University of California Press, 2002); and International Adoption: Global Inequalities and the Circulation of Children (NYU Press, 2009, o-author with Diana Marre). Briggs has also published  numerous articles on empire/transnational history of the U.S. in Latin America; reproductive politics and race and sexuality; adoption; and immigration/migration. Recent articles ahve been published in International Feminist Journal of Politics; Feminist Studies; Frontiers; Scholar and the Feminist Online; American Quarterly; American Indian Quarterly; Scripta Nova (Barcelona). In 2012 she created the academic blog site Somebody’s Children: A Blog about Adoption, ART, and Reproductive Politics, where she offers incisive commentary informed by her extensive research.  Professor Briggs has a long history of activism both within institutions and in the community, especially on issues of immigration, and is a collective member of the Tepoztlán Institute for Transnational History.