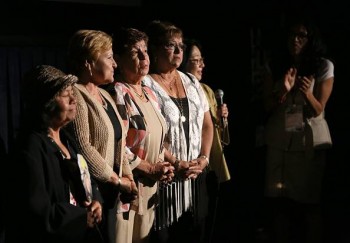 Photo of Madrigal plaintiffs at the world premiere of No Mas Bebes in June, Getty Images. Picture provided by author.

On February 1, 2016 PBS’ “Independent Lens” will air the critically-acclaimed documentary, No Más Bebés (No More Babies), which details the forced sterilization of Mexican-origin women at Los Angeles County Medical Center (LACMC) in the 1970s (check local channels for listings). Narrated through the recollections of patients, doctors, lawyers, activists and others directly involved, the film focuses upon the case of Madrigal v. Quilligan, the lawsuit filed by 10 forcibly-sterilized women against LACMA, Los Angeles County, the State of California, and the United States Department of Health, Education and Welfare for violating their right to procreate. Beyond detailing the events that occurred in the hospital birthing ward and courtroom, director/producer Renee Tajima-Peña and producer Virginia Espino take us into the streets and homes of Los Angeles, where they were also born and raised. Through on-camera testimonies from several of the women who are breaking their silence on the topic for the first time since the lawsuit, the film shows us the current realities and ruminations of the plaintiffs and their families, as well as the physician defendants and their legal teams.

It is the portrait of who are now known as the #Madrigal10 that offers the film’s most powerful contribution to our understanding of this painful, yet important, part of US history. Often characterized as poor, uneducated and powerless victims within early reproductive rights scholarship, No Más Bebés show the plaintiffs represented in the suit once again speaking out about the abuse they endured, and demanding answers to the question “why?” In recalling their experiences, the women directly dispel stereotypes of them as quiet, suffering victims who could not communicate. Instead, the viewers see them as committed, thoughtful and often humorous individuals who have insightful analyses of the events in the hospital and courtroom that impacted their lives and families so deeply. Premiering on the heels of the 43rd anniversary of Roe v. Wade, upon which their suit was based, No Más Bebés elevates the voices of the plaintiffs involved in the Madrigal trial to finally tell a national audience, in their own words, why reproductive justice necessitates to engage with so much more than legal access to abortion. Moreover, the film reminds us that women of Mexican descent have been on the forefront of struggles for the right to have children since before the term “reproductive justice” was coined.

As one of several significant episodes of sterilization abuse of Latinas in the United States, the events that occurred at LACMC are now well-documented in the academic record (Velez 1980, Espino 2000, Gutiérrez 2008, Stern 2015). Scholars in various disciplines (anthropology, history, sociology) have found that the sterilization abuse that occurred at LACMA was influenced by racial, class and gender bias. Doctors or other hospital personnel would often approach patients of Mexican-origin when they were at their most vulnerable; namely, in the midst of giving birth. Further, these doctors used coercive measures (lying, scare tactics, physical force) to get women to agree to sterilization.

Despite the fact that birthing women of Mexican descent are at the center of these events, beyond drawing from their trial testimonies and media accounts, academic scholarship has never captured the experiences of the plaintiffs who participated in the Madrigal case. In my own efforts, I was only able to locate the son of one of the women involved. A crucial part of the story that No Más Bebés portrays well is the plaintiffs’ own recollections of the events that took place. All of the women who we meet in the film share that they, themselves, believed that they were sterilized specifically because they were Latina and poor. They also share how it felt to participate in a lawsuit where the odds were clearly stacked against them because of racial and class discrimination. Despite the court’s decision on the side of the defendant doctors, a legislative decision was made ordering new protocols relative to sterilization consent forms that were written in a patient’s language and at a 6th grade reading level. A 72-hour waiting period between the consent signature and the procedure was also put into place, to help ensure that no coercion on the part of medical professionals would occur. Resulting from the testimonies of the #Madrigal10, together with the efforts of Chicana advocates, consent procedures were established that remain in place to this day.

No Más Bebés also shows that socially grounded attitudes relating to ethnicity and gender can play a role in the provision of reproductive health care services; a message that is important for us to hear today. In my own research I show that the abusive practices that occurred at LACMC were not only shaped by debates on population control, but also by concerns about increased immigration from Mexico and the stereotype that Mexican women gave birth to too many children. Through tracing newspaper articles, organizational records and scholarly research in Fertile Matters: The Politics of Mexican-origin Women’s Reproduction, I show how these “stereotypes” about Mexican immigrant women being hyper-fertile and “having too many children” are deeply-rooted beliefs that are part and parcel of institutionalized racism and were perpetuated by the media, social science, and immigration control activists throughout the 20th century carrying into the 21st century. Beyond representations of the perpetually “pregnant pilgrim” who came to the United States purposefully to have children born on US soil so that that they could become American citizens (an idea perpetuated in both Mexican news media and popular culture), “hyperfertility” as a social construct became significantly entrenched in academia, and has thus gained legitimacy in both scholarly research and policy response. I argue that this context and the general public perception that Latina women are significantly more “fertile” than women of other races and ethnicities influenced medical practitioners’ behaviors.

A growing amount of research shows that fear about discrimination in public hospitals prevents immigrant women from seeking care. Last September, a Houston mother faced deportation after being arrested during a visit to the gynecologist’s office. Fantasies and fears of the “anchor baby” have now been institutionalized and incorporated into our national lexicon. Thus, while times have changed, these ideologies continue to persist. It is precisely because of enduring stereotypes of Mexican origin women’s hyperfertility, that we must listen carefully to the lessons that the #Madrigal10 recount, and use them to link historical events to contemporary struggles for reproductive justice within Latina/o communities.

Elena R. Gutierrez is an Associate Professor of Gender and Women’s Studies and Latin American and Latino Studies at the University of Illinois, Chicago.  She is also co-author of Undivided Rights: Women of Color Organizing for Reproductive Justice, which will be reprinted by Haymarket Press in April and director of the Reproductive Justice Virtual Library https://www.law.berkeley.edu/centers/center-on-reproductive-rights-and-justice/crrj-reproductive-justice-virtual-library/.