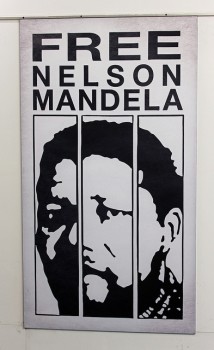 I wrote this poem for Nelson Mandela in 1988 because he truly moved me, all along the path of his life as I began to know about him, and his spirit will continue to move me, always.  The poem speaks for me of what I think of him.  He was a great Spirit who came to this earth to be Nelson Mandela, and he kept the radiance he brought with him from the spirit lands of the ancestors.  With the example of his life, he “lifted us up,” as my own Nez Perce elder, Albert Andrews would say.  I have read the poem at literary events, but it has never been published.  On the occasion of Mandela’s death, my dear colleague, Jualynne Dodson asked, on the Ford Foundation Fellows listserv, what the impact of Mandela had been on the Chicana/o community.  I sent her my poem, from my own Native (Nez Perce) and Tejana perspective.  As I re-read what I had written in 1988, I saw that everything that I wrote for him all these years ago, still holds true.  And I did write the poem while listening to Abdullah Ibrahim’s piano composition, “Mandela.”  Ibrahim, moved by Mandela, composed his piece, and I was moved by the beautiful music for this great human being, this Maestro, who brought his light to the world.  It is a poem from my heart.

Summer 1988, on the occasion of Mandela’s 70th birthday, when the South African government offered him a six hour visit with his family

I sing your name

in the name of all peoples locked in and up

in their very cells

weighed down by all the forces

that do not want their hearts light

Triumph is a sweet song

the one you know

saxaphones jubilant for your spirit

to will your conscious waking

for all of us to see

And it is hard, Mandela, Mandela

Six hours offered you with family

with Winnie and your daughters

six hours to hold each other

gulp in every detailed facet

as if the heart of the very mother earth

would burst with joy at such a moment

but this joy cannot be

it is, as you say, not possible

for you are not alone

but one of oh so many whose pain like yours

seeks to engulf you in despair

This visit offered is not to them

horror with the face of most intentional genocide?

when in those same six hours

sit, like you, in other prison cells for their “subversion”

When heads are cracked and bodies wracked

across the landscape of a continent that is yours theirs

to stop its count of life

And you know, too, that count

So you stop the maddened offer of a visit

What would you have said, Mandela, Mandela?

“Shall we have tea, Winnie?

Daughters, rub my back, I am so sore.

What shall we talk about?”

And in the next cells casually inflicting itself

in studied vehemence on seemingly countless others

the obscenity of racial/cultural boundless hatred

We are visiting for you all over the world

for you and with you in our homes your face shines

from  the walls of our hearts

Poets gather to sing for you

Peoples gather to struggle with you

Workers pass the light of your name from mouth to mouth

Races, classes and sexes unite for you and for the people

Children learn of you and of the brave children

through whose eyes and spirits we find courage

Agelessness is where principled commitment is born and lives

Even in the splattered, broken bones of death

that wants so badly to detain the march of liberation

in all its splendor

The people you stand firm for are real and true

The visionary will outlast the cynic, the impotent and depraved

It is a matter of time

Only a small matter of time

The freedom spirit is soaring from heart to heart

To stop for six hours for convenience?

How you knew how time is precious

How you knew to keep on soaring

*With thanks to Abdullah Ibrahim, because this poem was written to his composition “Mandela.”