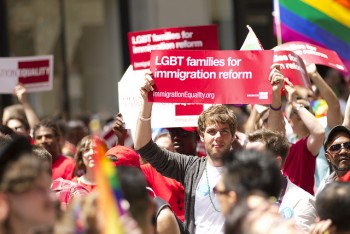 In response to grassroots pressures and organizing by undocumented communities, various U.S. federal and state agencies are enacting new immigration policies for the first time in decades. Almost all of these recent policy changes are highly pragmatic and offer limited administrative relief.

Undocumented communities, organizations, and artists actively critique these limited forms of administrative relief. In this article, I look to how two undocumented artists, Jesús Iñíguez and Julio Salgado, demonstrate the pressing need for administrative relief while remaining critical of its troubling limitations. I situate Iñíguez’s and Salgado’s contributions with José Esteban Muñoz’s meditations on gay pragmatism and queerness as two binary approaches to politics. Muñoz offers important perspectives on dreaming, political action, and compromise. Throughout this article, I consider how Iñíguez and Salgado queer how Muñoz approaches the politics of gay pragmatism vs. queerness. Iñíguez and Salgado urge their viewers to consider what types of liberation are possible in the present moment and also highlight the need to push meanings of what can be considered possible in the present moment.

For context, let us consider two programs of administrative relief. The first program is Deferred Action for Childhood Arrivals (DACA), which has been administered by the U.S. Department of Homeland Security since June 2012. DACA provides temporary deportation deferral for undocumented residents who entered the country under the age of 16 and meet a lengthy list of additional criteria.[1] The second program is California Assembly Bill 60 (AB 60), which has been administered by the California Department of Motor Vehicles (DMV) since January 2015. AB 60 permits eligible undocumented residents in California to apply for driver licenses. Both of these programs provide important yet limited administrative relief for undocumented communities.[2] Neither of these programs provides a pathway to citizenship; they may be productively contrasted to attempts at broader (but still limited) legislation, such as the DREAM Act.[3]

Homoland Security (see http://juliosalgadoart.bigcartel.com/) reshapes and re-imagines the presently-militarized U.S.-Mexico border. In this futuric border scene, programs like AB 60 and DACA are not necessary because this border privileges movement and aesthetic performances of queerness — important especially for Trans and Queer migrants of color whom are among the most marginalized by present border conditions.

As Muñoz writes, “The present is not enough […] The present must be known in relation to the alternative temporal and spatial maps provided by a perception of past and future affective worlds.”[5] The present temporal and spatial maps at the border are saturated with security and militarization, yet the absence of security culture in this drawing is striking. By depicting a border scene absent of security and militarization, Salgado takes to task Muñoz’s call that “the present is not enough” by re-imagining spatial and temporal maps in this utopic border scene. Importantly, Muñoz also links “homosexual pragmatism” with homonormativity.[6] In this drawing, Salgado rejects pragmatic immigration politics and homonormativity through the non-homonormative bodies he draws. The horizon is prominently displayed in this drawing, which can be read as a provocation to consider Muñoz’s conceptualization of “queerness as horizon.”[7] 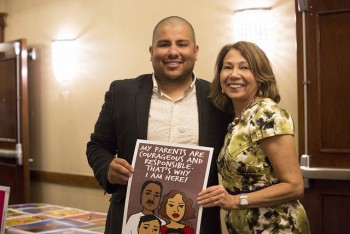 “Homoland Security” works to represent the grassroots dreaming of undocumented and UndocuQueer, organizers, communities, and artists. This drawing is legible as a heuristic piece that reflects futuric politics which are grounded in a consciousness of the past and present; a politics that uses this consciousness to push what is possible in the present moment.

The following cultural production outlines how the day-to-day benefits of DACA and AB 60 complicate the refusal of these programs based on a political premise.

Undocumented and Awkward by Julio Salgado and Jesús Iñiguez is a comedic web series that examines how being undocumented creates uncomfortable, unsafe, and awkward moments.[9] This episode was produced in late 2011, about three years before AB 60 took effect.

Far from Homoland Security’s utopic border, the episode opens in a nondescript parking lot outside of a bar. Jesús is on the phone. It becomes clear that he is being stood up on a blind date because he could not enter the bar where they were supposed to meet (the bouncer did not accept his consular ID card as valid identification). The phone call ends when Jesús’ date cancels the date because Jesús could not enter the bar.

While Jesús is on the phone, an intoxicated couple passes in front of the camera on their way to the car. The couple communicates that they both have had too much to drink but will drive home anyway. In contrast to Jesús, the couple take for granted their privileged access to a state ID card. This scene points to the cultural, rather than simply pragmatic, need for administrative relief (such as AB 60) that would provide undocumented residents with reliable identification.

DACA and AB 60 open possibilities for Jesús to access the legitimate state ID card that he lacked in this episode. Administrative relief, a form of pragmatic politics, is a method of resolving everyday needs and desires. Importantly, Jesús rejects a normative, assimilationist desire to become like the intoxicated couple (what Muñoz characterizes pragmatic politics).[10] By maintaining that pragmatism does not inherently equate to normativity and assimilation, this episode of Undocumented and Awkward bridges gaps between gay pragmatism and queerness in Cruising Utopia.

Episode 1 of Undocumented and Awkward makes it more difficult to characterize pragmatic approaches as incongruent with futuric, utopic politics associated with queerness. The next cultural production will continue to wrestle with this uncertainty and offer insight into what it feels like to participate in pragmatic politics while maintaining a politics of queerness and utopic dreams.

The final cultural production, “Dat DACAmented Life,” is an episode of Osito. Osito is also a web series focusing on Salgado’s and Iñiguez’s experiences as undocumented Bay Area residents. This episode was published in February 2015, several years after episode one of Undocumented and Awkard. In the time that elapsed between these two cultural productions, both Salgado and Iñíguez applied for and received DACA in their personal lives. This episode offers some of their reflections on DACAmented subjectivity. This episode further complicates an easy separation between gay pragmatism and utopian queerness.

As the episode opens, Jesús and Julio are sitting on the couch in their home and talking; they are trying to reconcile their utopian dreams with their participation in DACA. Jesús and Julio communicate that DACA was won through the struggles of many undocumented organizers – the two emphasize that people are not “given papers,” but that these papers were demanded, fought for, and won. They comment that the terms of DACA are a serious disappointment when compared to the dreams and goals of undocumented residents and organizers. Both Jesús and Julio mention not wanting to participate in DACA because their parents, along with many family, friends, and community members are excluded from DACA. Jesús states that:

“A whole bunch of us, we wanted to be idealistic and revolutionary and not apply for DACA in solidarity with our parents and people over thirty and anyone else who wouldn’t be eligible.” [11]

Julio replies to say that he felt the same way, but his family did not support this point of view and urged him to apply for DACA. Jesús and Julio both express reservations and sadness about participating in DACA because the program serves the federal government’s pragmatic bottom line rather than the utopic dreams that they and so many others fearlessly fought to materialize. The collective is important in this scene and relates to Muñoz’s discussion of the “not yet conscious” in Cruising Utopia.[12] In the reading that I am proposing, Salgado and Iñíguez are expressing a deeply futuric politics that is not yet here. The potentiality of this utopia is eminent, and their melancholic state is reflective of the lack of this politics in the present. Additionally, both Jesús and Julio clearly lament their increased privilege at the exclusion of many of their loved ones.

These three works by Salgado and Iñíguez demonstrate the struggles felt by social actors whose pragmatic politics are intimately tied to the utopian. These cultural productions demonstrate that it is indeed possible to participate in pragmatic politics while understanding that, in the words of Muñoz, “queerness is always on the horizon.”[13] Salgado and Iñíguez make note that doing so is difficult, especially when the present moment offers them limited choices to do otherwise. This arc of cultural productions demands that pragmatism and queerness be viewed outside of a binary. Considering these politics as linked, rather than opposed, allows for more grounded, nuanced approaches to how communities, organizations, and artists are working toward collective approaches to liberation.

Muñoz, José Esteban. Cruising Utopia: The Then and There of Queer Futurity. New York University Press (2009).

[1] Information on DACA may be found here: http://www.uscis.gov/humanitarian/consideration-deferred-action-childhood-arrivals-daca

[3] Information on the DREAM Act may be found here: https://nilc.org/dreamsummary.html

[4] Homoland Security is available for purchase from the artist at: http://juliosalgadoart.bigcartel.com/

[9] All episodes of the web series are available online at no cost to the user. To find the videos, please search for the Dreamers Adrift channel on YouTube or visit www.dreamersadrift.com directly.

Ryan King is a graduate student in the Feminist Studies Department at University of California, Santa Cruz.  He is primarily interested in the politics of desirability and intimacy in virtual spaces and the politics of space and movement in contexts of neoliberalism and gentrification. He has thought through these research interests in two major research papers to date. The paper “Re-imagining Bodies, Reifying Borders: The Politics of Desirability and Space on Grindr” examines how and why GPS technologies, borders, desirability, visibility, white supremacy, transphobia, ableism, and further factors construct a “citizenship of desirability” that Grindr users participate in to access their desires. The paper “Dreaming of Queerness in a Pragmatic Present: Julio Salgado and Jesús Iñíguez Complicate the Divide Between Queerness and Gay Pragmatism in Muñoz’s Cruising Utopia” takes a look at how undocumented artists speaking for themselves offer insight into the challenges and possibilities of using their agency to access rights in a DACAmented age that distributes administrative relief unevenly within undocumented communities.