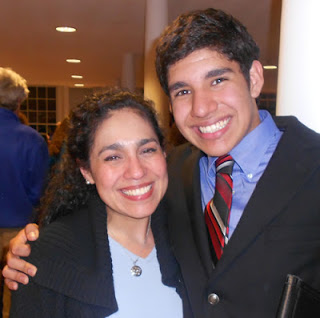 For the past twelve years, I’ve lived in Amherst, Massachusetts, an iconic New England college town that has a high-income and predominantly white population that often boasts about a family lineage that dates back to the first pilgrim settlers. Luckily for my son Miguel Angel, who is now a seventeen-year-old and about to enter is senior year at the local high school, he’s learned to meet such boasting with his own story of a family lineage that pre-dates those settlers and is tied to the Yaqui Indians of California and Mexico. It has not always been smooth sailing—such as the time his elementary school teacher called me because my son upset his white classmates by telling them with a typical nine-year-old bluntness that “they didn’t belong in this land.” We worked through the incident together, making it the prototypical “learning moment” with his class. For my son Miguel Angel, such historical positioning became necessary in order for him to claim a space in a place that was not originally intended for him. Yet we learned from other friends of color who had a longer history of making space for themselves in the region, and over time built a diverse community of family friends. The making of home and community are indeed socially constructed, in addition to being passed on from generation to generation.

At the 2012 MALCS Institute, Susana Gallardo and I organized a roundtable titled, “Las Madres Profesoras in the Academy” in an effort to create a space to discuss the joys and challenges of working in academic environments while also being a mother/parent. What we found most enjoyable about the roundtable was sharing about how each of us were succeeding and struggling with creating such a balance. In doing so, we learning from each other’s strategies and sabiduria, especially since most of us were the first mujeres in our families to forge this professorial path. We also discussed the institutional realities of faculty positions, which often causes us to be far away from our extended families, thus forcing us to rear our children in communities that are regionally, culturally, and even economically radically different than the ones we grew up in.

When we introduced ourselves at the beginning of the session, we also noted the ages and names of our children—something which often doesn’t happen at conference panels. Although the ages of our kids ranged from four years old to seventeen, it was clear that despite the age differences, we were all trying to figure out how to reconcile our lives in academia (which often negates the personal lives of students, staff, and faculty) with the fact that our children and broader families were at the forefront of our lives.

At the roundtable, we discussed the importance of building such homes and communities on our own terms, regardless of where we were located. Each of us had stories of the lengths we went—whether driving across town, or flying across the country—to make sure our children had a range of experiences that would help them develop a healthy and well-grounded sense of identity. We also discussed ways in which we could influence our institutions to be more sensitive to motherhood/parenthood issues so that we can be in a work environment that allows us to be successful in all the areas of our lives. Increasingly (although perhaps grudgingly), academic institutions are recognizing that they must change their insensitive practices and unrealistic expectations if they are to remain as cutting edge and relevant scholarly environments in the twenty-first century. Creating a work place where mother-scholars are welcomed, encouraged and expected to succeed is central to this shift. For instance, the chair of my department when I first started at UMass Amherst (a white male) was incredibly sympathetic when I told him I needed to teach between 9am-3pm because my son’s inability to be in an after school program as a five-year-old. Not only did he schedule my courses T/Th between those hours, but the faculty meeting was also scheduled between 12-2pm. These seemingly simple accommodations made a world of a difference in mine and my son’s happiness and success.

When I was a graduate student mother in the early-1990s, virtually no conferences held panels, workshops, or roundtables on the topic of balancing motherhood with academia. At this Summer Institute, our panel was one among several on mother-related topics including Danielle Barrazza’s “My Baby Bump” and Karleen Pendleton-Jimenez’ wonderful reading of her memoir on butch pregnancy and motherhood (http://labloga.blogspot.com/2011/11/how-to-get-girl-pregnant.html).

Things are starting to change and it’s great to see that MALCS is once again at the forefront of this important discussion. At the roundtable, it became clear that we wanted to continue the conversation outside of the institute, and thus we are starting a queer-friendly parenting list for MALCS members and affiliates. We hope you will join us in our effort to share experiences, best practices, and a safe space to get advice.  Please join us on our new email discussion list!  To join the “Madres Profesoras” email list, please email Susana@malcs.org

Mari Castañeda is an Associate Professor of Communication Studies at the University of Massachusetts, Amherst.  She studies new media and telecommunication policy, Latina/ethnic media studies, and transcultural political economy of communication industries. Her latest book is Mothers’ Lives in Academia, a collection of essays co-edited with Kirsten Isgro, forthcoming from Columbia University Press.

Mari, Your essay highlights how much the question of Chicana/Latina/Native American women’s inclusion in the academy is not only about whether an institution provides affordable and quality child care – which is vitally important, but also about the practices of the profession and the services that we can all make use of to help that next generation. I like how much your essay emphasizes that even the seemingly small gestures matter. Thank you!