The year 2014 ends with our eyes turned to the aftermath of the events at Ferguson, Missouri and elsewhere, where police violence against black and brown communities of color is being increasingly challenged through mass mobilizations. Angry, but also inspired, we at Mujeres Talk have collected our thoughts below, as part of the urgent discussion now surging into view about institutionalized violence against people of color. 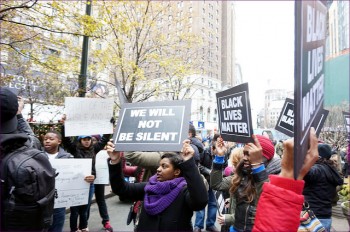 Black lives matter.  A statement of fact that becomes relevant in its temerity, its urgency, and its ability to express so simply a historical set of circumstances fraught with example after example revealing the opposite to be true. It is a bold response to the reality that negates it and makes its very articulation a necessity.  Black lives matter.  We must state this truth as many times as it is necessary.  Because blacks lives become fragile in the hands of a society that seeks to destroy them.  Black lives.  They should matter.  In Ferguson, MO.  In Sanford, FL.  Anywhere.  Everywhere.  Black lives matter.  And yet.  Black teenagers continue to be gunned down by police officers or vigilantes protected by a system that doubles down on them.  And Baldwin comes to mind: “All I know is, he’s got a uniform and a gun and I have to relate to him that way. That’s the only way to relate to him because one of us may have to die.”  May have to die. Poignant because we know who “the one of us” will be.  Black lives matter.  And yet.  They continue to be extinguished by our institutions.  Black lives matter.  They matter.

The recent deaths of black men and boys at the hands of police in the U.S., and news of earlier similar events, as well as the loss of life facing migrants at the U.S.-Mexico border brings into focus the deadly shortcomings of policies that rely on criminalization, militarization, detention, harsh sentencing, and imprisonment. The harsh policing in Black and Latina/o communities of Los Angeles described by Mike Davis morphed into the mass incarceration analyzed by Michelle Alexander and the increased surveillance of Black and Latina/o communities researched by Victor Ríos.[i]  Black girls and Latinas are not exempt from prevailing policies and laws that punish their infractions more harshly – an area of research and policy that The African American Policy Forum is pursuing. Yet this increased turn to criminalization and incarceration also had its complement in U.S. immigration and border policies, where militarization and now massive criminalization and incarceration are the norm. Joseph Nevins analyzes this shift, one that grew increasingly strident post-9/11 – and that has led to the tragic loss of life at the border described by Luis Alberto Urrea.[ii]  Blanca E. Vega’s recent blog on the Latino Rebels site makes the case that Blacks and Latinas/os are allies in the struggle for greater social justice, and takes Spanish-language media to task for not covering black deaths at the hands of police more thoroughly.

We desperately need to question how and why heightened criminalization and incarceration emerge as “solutions” that disproportionately impact African Americans, Latinas/os, and migrants, and how such “solutions” can be undone. At The Ohio State University, we are involved this year in a series of events commemorating the 50th anniversaries of landmark pieces of legislation in the United States: the 1964 Civil Rights Act and the 1965 Immigration and Nationality Act.[iii] Through a series of panel discussions, lectures, and interactive workshops, students and faculty at OSU have been and will be able to re-consider the significance of these two landmark laws; reflect on the movements, events, and consciousness that made them possible; discuss the histories that made them necessary; explore the opportunities they created; and critically assess contemporary inequalities that endure. For me, commemorating both of these events in a year when grassroots movements are once again making us aware of the loss of Black and Latina/o lives reminds me that civil rights and immigration are not merely linked by a shared legislative anniversary, but that instead, that shared anniversary marks a moment of heightened consciousness about the insidious effects of racism and discrimination that can permeate all aspects of U.S. policy. 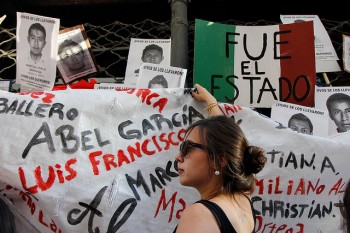 On November 24, 2014 the Ferguson, Missouri verdict to not indict Darren Wilson in the homicide of unarmed Black teenager Michael Brown sparked a response that initially resembled the 1992 Los Angeles uprising after the Rodney King not-guilty verdict, yet has quickly erupted into a solidarity movement that surrounds the hashtag #blacklivesmatter and spans across geopolitical borders.  An important connection in building consciousness around racialized and gendered police violence is the Spanish assertion “fue el estado” that has been articulated by activists, scholars, and other social actors who are seeking justice in the September 26th disappearance of the 43 students from a rural teacher-training school in Iguala, Guerrero, Mexico.   According to Charlotte María Sáenz, the mainstay of this movement, particularly for the parents has been “Vivos se los llevaron y vivos los queremos” responding in critical disbelief to Mexican authorities declaration that the 43 are dead, similar to the way families and activists have challenged the vast “disappearance” and feminicide of mujeres in Juarez and beyond.[iv]  Another resonating and profound echo of solidarity with the disappeared students have been the words “They tried to bury us. They didn’t know we were seeds,”  which Sáenz notes was said by the former Zapatista Subcomandante Marcos in honor of “his deceased compañero” Galeano, a teacher who was murdered in Chiapas, Mexico in May of 2014. The likening to seeds illuminates the awakening minds and bodies across imposed state borders that are simultaneously enunciating #not1more deportation, ni un@ más deportación.  All together, these powerfully show the importance of solidarity movements against state violence that are not bound by imposed demarcations.

At a recent event organized by Critical Resistance in solidarity with the protests against police violence against black men and boys, Robin Kelley reminded us that the police use the excuse of fear (of black violence) to claim they acted in self-defense. In addition to the hash tag, #blacklivesmatter, which refutes the continued devaluation of black bodies inherited since slavery, Kelley sees these murders alongside settler colonialism where white, middle class or wealthy people intrude into black neighborhoods and then claim they are simply defending themselves from blacks, rather than vice-versa.  This is similar to the scapegoating of Latino/a immigrants as perpetrators of crime and violence rather than groups displaced and killed at the hands of state and cartel violence, policies such as NAFTA, as well as the victims of abuse and death at the hands of the police and the border patrol.  The Organization, “No More Deaths/No Más Muertes” released a report in 2011 that documents over 30,000 cases of abuse and murder by the border patrol. That the state is an arbiter of violence, rather than the force to protect people of color, is at the heart of Critical Resistance’s radical move towards prison abolition that attempts to diminish the state’s intrusion into communities by empowering communities to develop practices, organizations, and new models of social and economic interaction that help people flourish. 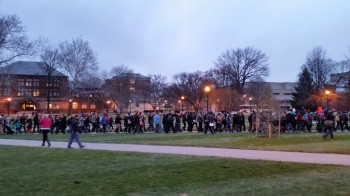 In New York City, right wing pundits and the head of the police union are accusing Mayor De Blasio and those who protest police violence of murder, following the murder and suicide by Ismaaiyl Brinsley of police officers Wenjian Liu and Rafael Ramos in Brooklyn. De Blasio has capitulated to these wild accusations, and requested that demonstrations pause while the city mourns the deaths of the two patrolmen.

It really does take one’s breath away.

Samir Chopra has written about the toxic self-pity that is so embedded in the policing establishment.  Psychically besieged, aggrieved and resentful, many urban police forces blame everything but the practices of law enforcement when their authority is challenged. And it seems to work!  It appears that legitimate collective action by hundreds of thousands who peacefully marched against the status quo must stop every time police representatives claim injury with the blatant aim of disciplining dissent.  Let’s hope that the protests continue going forward because we need to show that black pain matters as much as police pain, and because the campaign to defame legitimate protest by linking it with this brutal double slaying is just another outrageous example of anti-black racism. The conflation of civil rights protesters with a deranged murderer once again demonstrates (if we needed more proof) the instinctive, undiscriminating connection law enforcement officials make between blackness and violent criminality. We have to keep saying it, in the face of propaganda like this: Black lives matter.

The murders of Black children and men continue across the U.S. as Christmas Eve witnessed the shooting of yet another Black teenager by police. In Mexico, Federal Police are implicated in the disappearance and suspected murders of 43 student teachers in Guerrero. Every time I hear or read of another killing, my gut tightens and twists as I think about my Black and Brown loved ones on both sides of the border whose humanity is not recognized or valued by many. Often, I despair that things will never change, but widespread demonstrations against violence and death provide a glimmer of hope. People’s consciousness is being raised as thousands have come together to protest police violence and to proclaim that Black and Brown lives matter. I have to believe that a mass movement for social change is emerging. ¡Ni uno más, ni una más!

[iii] Our colleague in the School of Social Work, Professor Keith Kilty, inspired these events by reaching out to faculty in Asian American and Latina/o Studies, who in turn reached out to faculty and students in History, American Indian Studies, African American Studies, Disability Studies, Sexuality Studies, Women’s Studies, Political Science, and Comparative Studies to plan and organize programs. 2015 also marks the 50th anniversary of the National Foundation on the Arts and the Humanities Act of 1965.