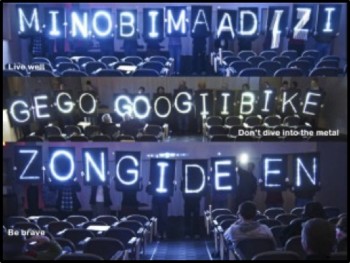 In 1986, when I should have been writing my PhD dissertation, I was reading boxes (no exaggeration) of Department of Energy materials regarding the planned siting of high level nuclear waste repositories. One of the sites proposed was on my home reservation at White Earth, amid Minnesota’s basalt and granite hardrock deposits—very near the headwaters of the Mississippi River.  I don’t now remember details of the science I learned during that time about crystalline rock, fractures, and ground water, but I do remember the urgency with which I investigated, the weeks and months during which I wrote, went to meetings, knocked on doors, and testified.

I had reason to recall that urgent dedication recently when Edith Leoso, Tribal Historic Preservation Officer for the Bad River Ojibwe of Wisconsin, spoke of the way her life had shifted unexpectedly with the proposal of mining in the Penokee Hills of Wisconsin. Likewise, Bad River Tribal Chairman, Michael Wiggins, Jr. was forced to quickly educate himself in the pertinent science and legal intricacies in order to lead the ongoing anti-mining efforts, to protect the land and the people, to guard the future.

Of the many ways to say please stand, I have chosen a few.

All things being equal, things are never equal. Think of scope. Like the reach of the imperial.  Or consider variables. Value. Or commodity. Ways of seeing. Angles and perspectives. Or how to solve for survival.

The national sacrifice.  Lesser known, and frequently unacknowledged, this convenience policy has marked many generations. Uranium mining. The fallout from atomic bomb detonation at White Sands.

What we erase from polite conversation. Bodies on fire. The historic cleansing of the landscape, the sweep of humanity west, west, west. Environmental r  ism.

Another partial differential equation. Let’s say a corporation proposes a mine. Variables include Tyler Forks. Bad. Potato. Rivers. A 22-mile, 22,000-acre strip of land. Jobs. Maanomin. Open pit. Exceptional or Outstanding Resource waters. Legislation. Iron oxide.  Fish. Blasting and pulverizing. New legislation. The functions depend upon the continuous variables. Fluid flow, for example. And changing laws. Somewhere along the granite line, someone enters. Let’s say they have put down one life and taken up another: the solution of the PDE. They face arbitrary functions. Changing laws. Guards. Guns. If the life is stretched over two points.  It vibrates. We cannot measure that vibration in this generation. We can sing it, or make it into light. (See above for a partial illustration.)

This past week an environmental warrior from the Pacific Northwest passed away. Billy Frank, Jr.  Frank was quoted as saying about himself, “I was not a policy guy. I was a getting-arrested guy.” But in the end he changed policy. A Nisqually tribal member, his battle for tribal sovereignty in resource management protected the salmon and left its mark on contemporary understanding of treaty law. To accomplish that he was jailed, beaten, tear-gassed, and chose to sacrifice much of his time and liberty. A life stretched over two points.

The Anishinaabe word minobimaadizi translated gives us the English live well. But it means something more. To live this good life in ways both obvious and less so. Though we may feel dwarfed by the largeness of passion and action of people like Billy Frank, Jr., we remain variables in the equation and can tip the balance one way or the other.

When we held an American Indian Sovereignty and Resource Management Conference at the University of Wisconsin-Milwaukee campus recently, we invited my colleague Lane Hall and his Overpass Light Brigade to participate one evening. Lane’s idea to create lighted letters and spell out protest messages above freeways has caught on around the country. At our event, we spelled words in Anishinaabemowin. (For these Lane needed more vowels!)  I am not an OLB regular holder of the light, but I volunteered to be one of those to carry and display the large placards. You will find me at the “I,” the third “O,” and the “G.”  One lighted letter in a 14-letter word? Only a pair of legs beneath a billboard? Ahem. Can you spell m  taphor without me?

I’d like to ask you to fold up your deck chair and head to the Penokee Hills protests. But the truth is, you probably have an environmental threat within biking distance. Or canoeing distance. Mining companies are pushing to conduct a toxic new form of extraction for sulfide, right next to the Boundary Waters Canoe Area Wilderness in northeastern Minnesota, near the 1,090,000-acre (4,400 km2) wilderness area that is located in the Superior National Forest.  Where insistence is a function of insanity. If x then why.  A mine parallel to 1,000 miles of canoe routes, in the habitat of moose, beaver, wolves, bear, lynx, deer, bobcats, bald eagles, peregrine falcons and loons, within easy polluting distance of our once remote family cabin. We’ve hardly hands enough to hold all the signs or mics needed in this indifferent world of resource capitalism.

Poetry is one letter when we spell resistance.

have yellowed into clichés, editorials that line the cages

of captured birds, or burn in unransomed stone fireplaces

sealed beneath the calloused ideals of legislators—

Though publicly professed (against all enemies, foreign and domestic),

and leather-oath sworn (will bear true faith and allegiance),

our waters our manoomin our children, abiinoojiihnyag.

Each season gavels strike new bargains with our oldest enemies

How do we translate the flashing fins of poisoned fish?

What other alphabet do you know to spell contaminated waters?

Like banned books words still burn on my tongue—reciprocity,

Even the vellum of justice has crumbled in fiendish fire.

Meanwhile we gather here, descendants of ajijaak and maang

lift our ancient clan voices in longing, for a chant of restoration

in a Faustian world.

Before a jury of the tricked and trapped and bamboozled,

the healing brush of common memory

a child’s wonder at each day’s waking

the freshness of a fine morning—waaseyaaban.

infinite, gete-gaming. If I say Wiikonigoyaang, she invites us to her feast,

how many will remember the eloquence of earth itself?

will you stretch out your hands in hope

draw it toward you—a gesture

fervent and older than language?

there are many white birch,

you must listen for it—aki.

Who among us will translate?

Kimberly Blaeser is a 2014 Contributing Blogger for Mujeres Talk and a poet, critic and essayist. She teaches Creative Writing, Native American Literature and American Nature Writing at the University of Wisconsin-Milwaukee, where she is a Professor. Her publications include three books of poetry: Trailing You; Absentee Indians and Other Poems; and Apprenticed to Justice. Her scholarly study, Gerald Vizenor: Writing in the Oral Tradition, was the first native-authored book-length study of an Indigenous author. Of Anishinaabe ancestry and an enrolled member of the Minnesota Chippewa Tribe, Blaeser grew up on the White Earth Reservation in northwestern Minnesota and worked as a journalist before earning her MA and PhD from the University of Notre Dame. Her poetry has also been translated into several languages including Spanish, Norwegian, Indonesian and French.