The video in the link above depicts the public humiliation of a child street vendor in Tabasco, Mexico. Three officials stand tall next to him as he inconsolably and powerlessly follows through on their command to dump on the street the merchandise he carried on a small straw basket. Once he empties the basket, the officials turn away and leave him on the floor to collect his merchandize. This incident took place in Mexico, but this also happens in our own backyard, here in the U.S.

When I watched this video, I was working on an academic article based on original research I conducted in 2009 to 2012 with street vending children and their families in Los Angeles, CA.  Street vending is a popular economic strategy for poor, undocumented and Spanish monolingual Latinos in Los Angeles. During my study, I spent two and a half years with various street vending families and conducted 66 interviews with children between the ages of 10-18 and their parents. I also accompanied several families while they sold goods on the streets.

Like the young boy in this video, many Latina/o children in the U.S. street vend with their families in order to help their parents pay the rent, buy their clothes, food, school supplies and pay for school tuition at colleges or private institutions (Estrada and Hondagneu-Sotelo 2011, Estrada 2013, 2016).  And like this young boy, many street vending children in the U.S. are publicly shamed for the stigmatized work they do alongside their immigrant parents.

This video reopened the injuries I witnessed with my respondents during my fieldwork experience.  It reminded me of the times I saw the young kids of various ages and their parents run and hide from the police behind parked cars while they sold food on the streets of Boyle Heights. Eighteen-year-old Veronica told me during our interview: “When the cop stops us we can’t sell that day…. We have to be hiding behind the bushes. Sometimes we even feel like criminals because we have to hide…”  These were humiliating, demeaning and frightening experiences. These kids were also constantly told to “go back to Mexico” because “street vending is not something we do here in the U.S.” Many of the children I interviewed, however, were U.S. citizens and had never traveled outside the U.S., they spoke English, and were enrolled in school.

The shame and stigma derives from various sources.  First, at the macro and structural level, street vending is illegal in Los Angeles.  Street vendors are among the 290 thousand informal workers in the Los Angeles County and 61% of them are undocumented immigrants.  Unable to find other jobs, many undocumented immigrants resort to street vending.  According to the latest economic round table report, we have about 50,000 street vendors in Los Angeles. The street vendors including the youth are thus criminalized for selling otherwise lawful items (fruit, beverages, peanuts, etc.), and many had experienced running and hiding from the police or city authorities. Second, structural level policies have a direct impact on micro level interactions. Public humiliations and ridicule from neighbors and school friends fueled the shame many expressed. Fourteen-year-old Amanda who sold fruit with her mother, said, “People use to look at me like, ‘Oh, she’s selling fruit,’ like my friends and everything.” Other kids were brutalized with physical violence. Thirteen-year-old Edgar started selling tejuino  (a corn-based beverage) with his mother in downtown Los Angeles when he was eleven. Kids at his Catholic school had mercilessly teased him as el tejuinero  (the tejuino boy) and had beaten him so severely that his mother, who feared for his safety, had sent him to recuperate with relatives in Mexico. 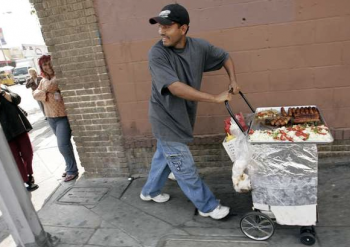 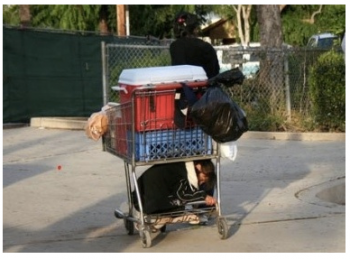 (These are common sights of sidewalk entrepreneurs in Los Angeles. To see the full stories visit the URL accompanying the pictures).

Sociologists have been interested in how workers respond when they are socially discredited because of their occupations. In their book, The Hidden Injuries of Class, Sennett and Cobb (1972) introduced the term “injured dignity” to refer to the social humiliations suffered by white male workers. In a study of inner-city black and Latino youth working at fast food outlets, Newman (1999, 86) suggests that “stigma clings to fast food jobs” and that this is also exacerbated by the low status of the workers who do these jobs, typically racial minority teenagers, some of whom are immigrants with less than perfect English. The teens defend themselves from assaults on their dignity, Newman argues, by seeking moral value in the work and by constructing themselves as self-disciplined, responsible, and mature. They break the stigma and establish their respectability by appealing to “timeless American values” that value hard work and by distinguishing themselves from beggars, drug dealers, and “fast-talkers” (Newman 1998, 98). Similar moral constructions based on honest work are espoused by black homeless street vendors in Duneier’s book Sidewalk (1999), the homeless recyclers in Gowan’s (2009) study, and the homeless in Snow, Baker, and Anderson’s study (1986). 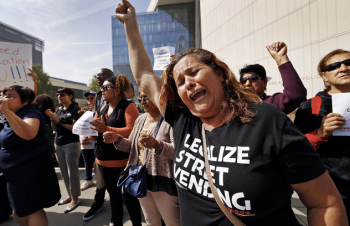 In this image, you see street vendors and their allies protest outside the LAPD headquarters. See full story here by Mejia here: http://www.latimes.com/local/lanow/la-me-ln-street-vendor-protest-20150331-story.html

How do Latina/o street vendor kids confront the stigma of doing low-status, highly visible work? They rely on new moral constructions based on inversions of widely held negative stereotypes of racial ethnic minorities, the poor, immigrant foreigners, and girls and children who work in the street. In other words, they don’t challenge these negative stereotypes, but they used them to define themselves in opposition to them. These young street vendors are proud of the money they are earning, and they construct their own identities and street vending activity in a positive fashion. They see themselves as hardworking and as good sons and daughters.  Customers often help validate their worthiness. Lolita who had been selling raspados alone since she was fourteen, felt proud of the comments customers had made. “People will come and they’ll go, ‘I wish my kid was that responsible,’ you know. It feels good when people tell you, ‘Oh, you’re small but you’re already doing this.’”

These young street vendors also seek to create meanings that attribute positive values to their work and self-worth.  They do this by distancing themselves from gang members and align themselves with Mexicans who work hard.  Thirteen year old Nadya told me, “It [vending] gets you tired, but you have like time to do it. And you’re not doing dumb stuff over there, seeing TV, sitting down, I dunno, doing drugs, tu sabes  [you know] not doing bad . . . like my cousin, he got into jail like three times already because he’s like stealing and doing drugs and he’s a gangster. I don’t want to be like him.”   As we see, child street vendors work hard to create their dignified self-identities as protection from the social injuries that come with performing stigmatized informal sector work in public urban spaces.

The video included in the link used to open this essay elicited sympathy from various viewers. One in particular stood out to me. One of my formers study participants, I call Linda, posted the following on the video: “It’s sad to see this. Because we’ve experienced it hundreds of times. It hurts to see this poor child go through this.” Linda was fourteen-years-old when I interviewed her, but had been street vending with her mother since she was five. She is now a college student and no longer street vends, but as the quote above reveals, these are deep stigmatized injuries that do not heal fast enough over time.

Newman, Katharine S. 1999. No shame in My Game: The Working Poor in the Inner
City. New York: Alfred A. Knopf and The Russell Sage Foundation.

Dr. Emir Estrada is an Assistant Professor in the School of Human Evolution and Social Changes (SHESC) at Arizona State University. Dr. Emir Estrada earned her Ph.D. and M.A. in Sociology from the University of Southern California (USC) in 2012. She received her B.A. in Sociology with a minor in Chicano/a Studies from the University of California, Los Angeles (UCLA) and she is also a proud Long Beach City College (LBCC) alumni. Her research interests in immigration and gender are influenced in great part by her own immigration experience, which has motivated her to study immigrants from Mexico and Central America who work in the informal sector of unregulated or semi-regulated jobs. More specifically, she is researching the children of these workers, examining their role in the family’s economic survival. Dr. Estrada has been awarded grants from the Ford Foundation and The National Science Foundation.  She has published articles in The Journal of Contemporary Ethnography; Childhood; Ethnic and Racial Studies, Papers (an international journal); and a chapter in an edited book sponsored by the Ford Foundation.