A 2013 study recently published by the National Assessment of Educational Progress, shows that reading scores among Latina/o middle-level students remain below the average of their white peers in such states as California, Florida, Illinois, New York, Texas and Washington. In fact, over the course of 30 years, Latina/o students in junior and senior high schools continue to see declines in academic achievement, standardized test scores, graduation rates and college attendance (Gándara, 2010).

What is this data really telling us? What is happening in our communities and public schools that keep this fast-growing minority group from closing the achievement gap and moving forward to college?

Undergraduate students from The Evergreen State College, sought to answer these questions as they conducted community-based interdisciplinary research in the town of Salish, Washington (a pseudonym) during the fall and winter of 2012-13. Our undergraduates, many of whom are bilingual, first generation minority students themselves, discovered that such questions are difficult to answer without understanding the larger context of a community.

Salish’s economy was based on logging, shellfish harvesting and salmon fishing. These industries are now in decline due to international outsourcing, company restructuring, and the enforcement of tribal fishing treaties. Struggling against poverty, today Salish’s largest employers include the local casino and a subsidiary wood product company. Other seasonal industries have emerged, such as salal harvesting (floral greens), wreathe-making, oyster harvesting and tree planting, all of which draw a Mexican and Guatemalan labor force. These immigrants now have children attending the Salish public schools.

Learning A Community—Undergraduates at Work
Evergreen College students were eager to learn about Salish, a community they bypass on the way to weekends in Seattle or to the capital, Olympia. Given Salish’s invisibility, faculty identified this as an important site for a field-based study.

The majority of our college students chose to mentor Latino/a and ELLs in four K-12 public schools. They volunteered at one dual language elementary school, a middle school, a junior high school and a comprehensive high school whose students included Mexican, Euro-Americans, Guatemalan and Native American students.

Undergraduates tutored elementary students who received content area instruction in Spanish and English. They worked with a faculty of elementary bilingual teachers who utilized student-centered and culturally relevant pedagogy. During their weekly school visits, Evergreen students observed a rich cross-cultural learning environment where languages, family traditions, histories and the arts held equal value along-side math, science, and state standards. By implementing a dual language program, these K-5 students were engaged by a curriculum and pedagogy that resonated with their lives (Brown-Jeffy & Cooper, 2011).

Our undergraduates also met elementary bilingual school staff who were concerned with issues central to the immigrant community. For example, school advocates, educators and immigration lawyers from Seattle organized a community workshop regarding “The Dream Act” and immigration policy in the run-up to the 2012 presidential election. Respectful of the families and their children’s needs, the workshop was presented and translated into three languages, Spanish, English and a Mayan dialect, Mam. At least 100 family and community members were in attendance at the elementary school. The undergraduates later recognized the importance of these collective educational efforts to support the concerns of the larger community.

Scratched Surfaces—Struggles at the Secondary Level
In contrast, our observations at the secondary school differed significantly from those at the elementary level. Gaining entrée into the predominately English-only, Salish High School was particularly challenging. Teachers explained they were too busy to accommodate our weekly visits. For those undergraduates who were able to observe ELL classrooms, they noted a predominant use of worksheets, homework assignments from other classes, with little culturally relevant content available to them. The teens often chatted amongst themselves, which later called into question the rigor of instruction they received. As our undergraduates collected data, it became apparent there were a number of variables that impacted ELL academic achievement in grades 8-12. 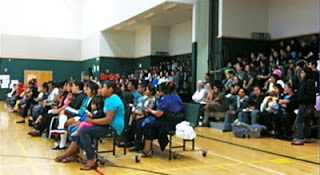 The college students noted how the popular media depicts minority students being saved by “supermen or women” who romantically buck the system in private or charter schools. And yet, our students reported in their interviews with faculty that they felt demoralized by the pressures they faced, such as the emphasis on standardized testing and the lack of resources. It was clear that the secondary ELL teachers had few opportunities for professional development and collaboration. Faculty isolation resulted in collateral damage where the teachers internalized these pressures, adopted low expectations, and essentialized ELLs as illiterate and incapable of any deep cognitive understanding. It was apparent to the Evergreen students that such cultural deficit thinking did little to help empower the high school students.

Our undergraduates also observed some educators who resisted external support, such as the tutoring or mentoring, fearing this would take time away from standardized test preparation. The introduction of culturally relevant pedagogy or dual language activities was rejected at the secondary level. Ironically, these were the same practices that proved to be successful at Salish’s dual language elementary school.

While secondary teachers emphasized content area instruction, our undergrads noted that the curriculum did not motivate ELLs. A common philosophical stance taken by educational administrators emphasized colorblindness. They were not interested in program models that affirmed diversity, such as through dual language classes, or the creation of supervised spaces for youth to develop a sense of belonging (Gándara, 2010; Slavin & Cheung, 2005).

Such initiatives were perceived to agitate students rather than empower them to critically think for themselves. When Evergreen students asked to take part in organizing a Latina/o cultural club, educators initially questioned why was there a need for such an organization? An administrator asked, “We don’t want to segregate students. Why couldn’t we have one big group that can get along?” At yet, it was at this time that our undergraduates dug in their heels, and became even more committed to attending after school mentoring sessions.

Over the course of a month, we saw the high school Latina/o Culture Club (a term generated and agreed upon by the youth) meetings increase from three students to five students, to 11 students, and to 15 students. Interestingly, some of the students who attended the club planning meetings were Euro-American youth who hold long-term cross-cultural friendships with their Latina/o peers. It was these same students who met while attending Salish’s dual language elementary school many years ago. A sense of school attachment and sense of belonging established through the extracurricular club seemed to lift student engagement. In fact, the teens were amazed to learn that our undergraduates attended a collage that was only 15-20 minutes away. 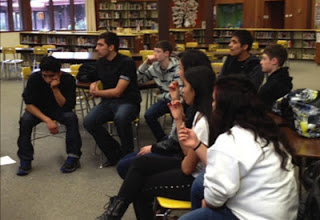 Meanwhile, without school funding, the club struggled to identify an adviser. As a result, the official status of the club remains uncertain. However, one science teacher visited a club meeting. She was visibly surprised to see sophomores, juniors, and seniors working side by side with college students, as they created art projects about their cultural backgrounds. One teen described how the club, with new friendships with the college students, shared laughter, conversation, and music and brought, “Relief from the stress of the day.”

Not a Panacea, But a Start
While our Evergreen students will continue to take part in the Latina/o club, as well as tutor in the dual language elementary school throughout the 2013 academic year, these initiatives alone are not a panacea for closing the achievement gap. But what we can say is there is a yearning, a need for connection to one another, to family, to culture. It is this lack of connection between communities and the institutional structures and practices of schooling which cause students to disengage from a system that often marginalizes them. The nurturing, affirming cultural practices evident in elementary settings are mostly absent from such as Salish High, whose families barely fit into the town’s history, culture, and fragmented economy. 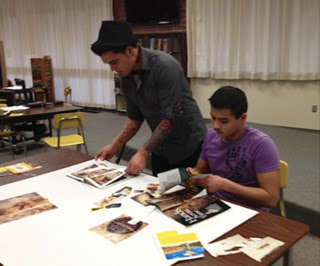 Figure 3. Salish High School student works on his culture poster board with an undergraduate mentor from The Evergreen State College.

It can be said through our initial fieldwork in the Salish schools that standardized tests scores just scratch the surface when addressing the educational inequities Latina/o students face. Similar outcomes are evident among secondary Latino/a students and ELLs nationwide as they experience inequitable access to core and advanced placement curriculum (Huerta, 2009). These students remain essentially parked in low-level classes, where a scripted and irrelevant curriculum are taught by a teacher workforce with low morale, with no opportunity for ongoing professional development and collaboration (Fry, 2004). Traditional high school program models, leaves little hope for disrupting the patterns of low academic achievement, graduation rates and college attendance among Latina/o students.

That said, our research does show how we can make some strides. When our undergraduates talked to Latina/o teenagers, they found that the youth wanted dual language instruction in their schools beyond the elementary level. The teens wanted a club to study culture and to learn about college. They were interested in the politics of “The Dream Act” and the possibilities for new immigration policies.

But space must be made within the community and schools for such engagement to take place. While the Salish community has taken steps in this direction, a systemic K-12 effort to disrupt what is not working in the public schools must be confronted. Collaboration with local advocates and mentors remains an approach that offers support to schools uncertain how to meet the needs of diverse communities such as Salish.

Brown-Jeffy, S. and Cooper, J. (2011). “Toward A Conceptual Framework of Culturally Relevant Pedagogy: An Overview of The Conceptual and Theoretical Literature.” Teacher Education Quarterly, Winter, 65-84.

National Assessment of Educational Progress. (2013). Mega-States: An Analysis of Student Performance in the Five Most Heavily Populated States in the Nation.Washington D.C.: National Center for Educational Statistics, U.S. Dept. of Education.

Slavin, R. and Cheung, A. (2005). “A Synthesis of Research on Language of Reading Instruction for English Language Learners.” Review of Educational Research, 75, 247–284.

Dr. Grace Huerta is a faculty member at The Evergreen State College in Olympia, WA. Previously, she was an Associate Professor at Utah State University. She earned her Ph.D. in Educational Leadership and Policy Studies from Arizona State University and completed her undergraduate work at the University of Southern California. Her areas of research include multicultural education, qualitative research methodology and secondary ESL/bilingual education. She is the author of the book Educational Foundations; Diverse Histories, Diverse Perspectives.

Great post! This really made me reflect on my own experiences in school and how I saw my community collaborate. I grew up in Maryland and in my elementary school there was a large Latino population. My mother felt very involved in my school life because there were interpreters available on-site, at PTA meetings, and during parent-teacher conferences. At times, the school would put together programs that targeted Latino families so that teachers could better understand their students’ family life and culture. I too had many resources available in elementary school that eventually vanished when I entered middle school and high school. My perspective on this poor transition is that because educators believe that a child’s early school years are the most important for development, more support should be provided during these years. Also, because there are less educators and counselors of an ethnic background in schools students’ opinions and voices are not heard. I believe change should occur within the educational system first to encourage multicultural discipline, bilingual education, and cultural services to students and parents. Your research shows that change is difficult when teachers are reluctant to cooperate and when resources are low. What these undergraduate students have done thus far is phenomenal and proof that mentoring is also needed in schools.